Play Ball! Check Out This Map That Shows NYC Actually Belongs to the... Mets?!

It looks like New York City really likes to meet the Mets.

The Amazin' Mets are doing pretty amazing lately, and its great to see that the city backing the boys.

The support is so strong that we are seeing a shift in the city from Yankee country to Mets country.

Vivid Seats has compiled its data to show that the Mets are outselling the Yankees in four out of the five boroughs. The Bronx Bombers are only outselling the Amazin's in well, the Bronx.

What is very interesting is that Manhattan is practically split down the middle. You'll also note that the split is generally in favor for which team is closer to their home borough. Uptown for the Yankees, downtown for the Mets.

Also worth noting is a neighborhood in Brooklyn that is for the Yankees but is completely surrounded by Mets fans. Kinda like going to a home game but rooting for the away team.

So, what does this all mean?

Well, how about that New York baseball is still very much prominent and that we love our teams?

Whether you are a Mets or Yankees fan you cannot deny that this city loves its baseball. America's pastime isn't in the past yet so why not shout it loud you love the Yankees and go greet the Mets this summer? 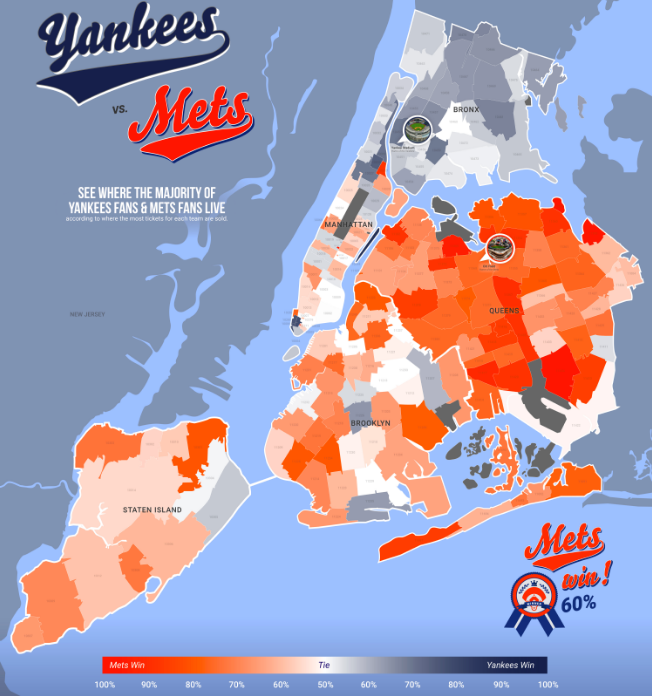 Check out What If There Was A Bridge Connecting Queens to New Jersey.