When does a house become a million-dollar home?

It is it any surprise how ridiculous it is to live in New York City? It feels like every other week there is a new study that makes us want to pull our hair out and scream into your throw pillow.

Well, this latest one is so bittersweet that you'll probably still want to yank your hair out after letting out a sigh of small relief.

Trulia's newest study shows that the takeover of million-dollar homes has slowed down overall, but Brooklyn is becoming infested with them.

The animated map makes these homes look like a disgusting infestation that is spreading to all corners and alleyways of the city.

The data shows nothing really that surprising.

Homes are getting more expensive and along that the city gets more expensive. But, the numbers presented is very much worth noting.

Bed-Stuy wasn't just the only Brooklyn neighborhood to see such a huge increase. In fact, the top five neighborhoods with the largest increase in million dollar homes all hail from Brooklyn.

Are seven-figure homes going to be the new normal when looking for a place to live in NYC? It seems like this plague won't stop anytime soon.

When the map does become fully washed with red, will we be shocked or still sigh and scream into a throw pillow? 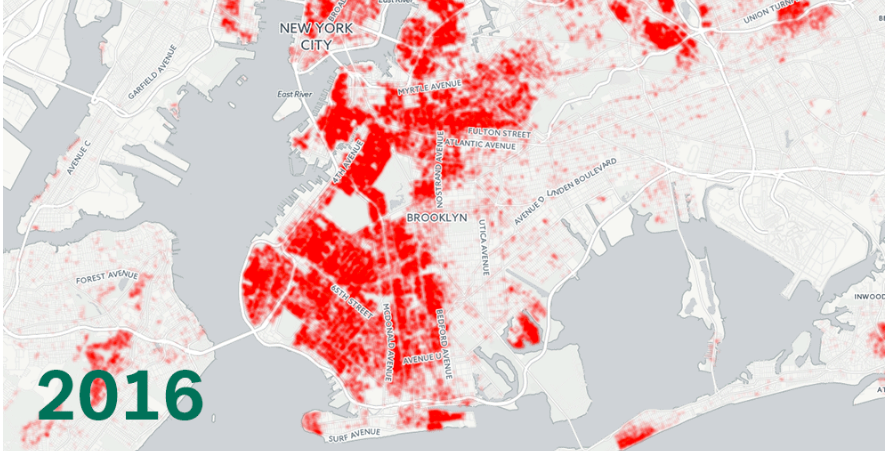 In the meantime, affording an apartment alone in NYC is still virtually impossible. Worse still, finding a reasonable housemate isn't always that easy either.

Check out This Incredible Week-Long Morning Dance Party in NYC.