Turf Boundaries: Check Out This Map of Where New York City Gangs Are Doing Their Dirt

Gangs and street crews have been a way of life for many New Yorkers for centuries. In a place that's seen regular turnaround of immigrant waves, many enclave communities developed their own de facto militias over the years.

Think The Warriors, Gangs of New York, or even Teenage Mutant Ninja Turtles.

Turf warfare has been the root of more violence than anyone cares to acknowledge, mostly fueled by economic desperation and bravado influence from around the way.

Now there's an interactive map illustrating the different crews and where they're located around the City, so you know whose territory you're in, in case you were wondering.

The concept of gang warfare has been romanticized a lot, but it's a very real thing. For entire portions of New Yorkers, these borders are very real and very dangerous.

The NYPD estimates that there are about 375 gangs in the City-- and they're not friendly with each other.

NYPD Commissioner Bill Bratton recently made a statement, saying "It's a fearsome reality: violence for its own sake." He's not exaggerating. Check out this other interactive map that'll show you how many people have been shot in a given area.

Bratton continued, "The gun has come to define manhood for these young men, and the willingness to use it a rite of passage."

Using the interactive map, you can browse the City's neighborhoods and explore the gangs in the different areas. Of the estimated 375 gangs in the City, Brooklyn has the highest concentration with 130 groups in operation. 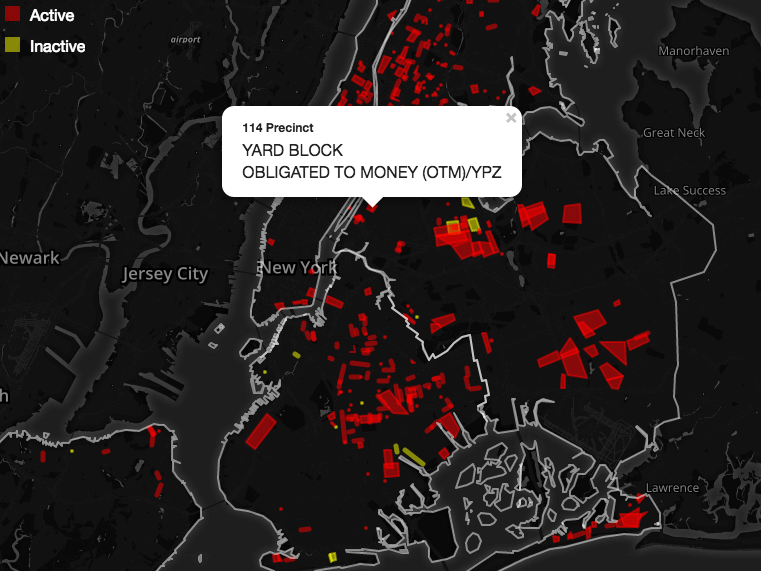 Next is the Bronx with 87, 75 in Queens, 40 in Manhattan, and even 13 in Staten Island. NYPD Deputy Chief Kevin Catalina, commanding officer of the NYPD Gang Division, recently said that much of the violence is, "Hatfield-and-McCoy-type stuff, but some of it is financially driven."

It appears Catalina's point is that these gangs are fighting for the sake of fighting, and sometimes it's over money. The NYPD can only do so much to protect New Yorkers. While minimizing fatal gun violence should be a priority, the police aren't the ones to put an end to gangs and violence.

As long as the City is a dog-eat-dog place where rent is far too expensive and not enough people can make ends meet on multiple minimum wage jobs, there will always be hustling. As long as there's a hustle, the block will always need protection from competitors. Simple as that.

Check out Where 2015's Mass Shootings Have Occurred, All in 1 Scary Map.