New York City's subways and buses are responsible for transporting millions of riders a day through its various routes.

One urban adventurer and public transit enthusiast, Tyler A. Green, decided to map just how frequently buses and subways travel.

Even though the dark red lines might seem like they're meant to depict more delays, it's actually illustrating the amount of trips per hour made along a route, meaning that the redder the route, the more trips made per hour.

"Stop the buses! Hold the phone! I now have visual proof that buses in and subways in the Big Apple run more often on Fridays than Saturdays. How insightful, right? Okay, so maybe not," Green writes on his blog.

Unsurprisingly, Green found that transit runs more frequently on weekdays, Friday in particular, than on weekends.

He also found that in areas lacking in subway service saw higher frequencies in bus transit trips, and vice versa.

Green created his map using Transitland and Mapbox, which compiled data according to the parameters of all transit stops made by the MTA between 7:30 a.m. to 8:00 a.m. on the mornings of Friday, January 22nd, 2016, and Saturday, January 23rd, 2016.

Furthermore, his data included scheduled service times on those dates, rather than actual transit performance, which means that, though insightful, his map could be slightly skewed depending on unforeseen delays on those dates.

Check out Green's interactive map here, and check out how frequently a trip is scheduled on your route. Just hover over an area to see how many trips are made between two points on various modes of transportation in an hour. 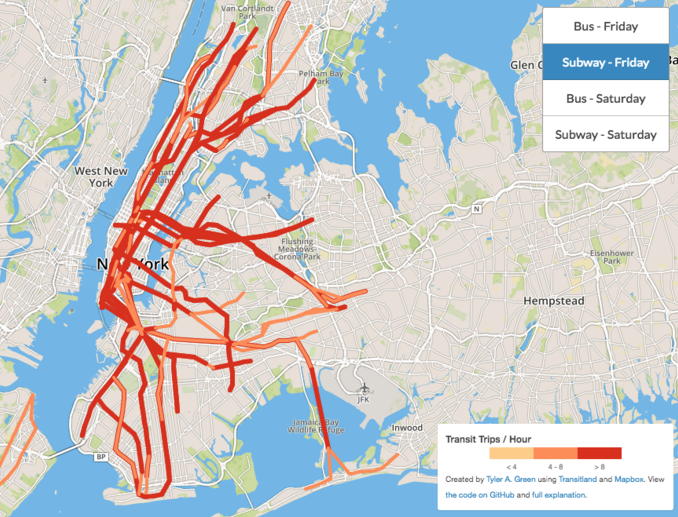 Via Tyler A. Green