NYC's Bridges and Tunnels Are Gonna Get an Epic Makeover Complete with LED Lights!

If any of you have driven into (or out of) New York City, then you too have seen hell. Just thinking about driving over the Whitestone makes us break out into a cold sweat.

This may soon change, however, and sooner than we might think– it looks like our bridges are getting a long overdue makeover.

Wow, did you know we even had that many bridges and tunnels? We haven't even heard of some of these! We also bet you didn't even notice that the Benicia-Martinez Bridge is actually in California. Got ya.

As reported by Curbed NY, Cuomo's plan details replacing the booths with sensors and cameras over the roadways that will automatically charge vehiles with E-Z Passes; if you're a driver, you might recognize this as an expanded version of the E-Z Pass fast lanes that already exist.

The bridges and tunnels will also be getting reinforcements against natural devastation, with new floodgates that will be installed on the entrances to tunnels, and bridge bearings will be switched out for "seismic isolation bearings" to protect against earthquakes.

We didn't know that protecting our bridges from damage from earthquakes was really a thing, so that's kind of stressful, but what're you gonna do?

This make-over is also as chic as it would be functional– "The New York Crossing Project" as its been dubbed by Cuomo's office, is dually an initiative to advance public art, so the bridges will also be outfitted with LED lighting.

Similar to the Empire State Building, the LED displays would change for special events like a World Series win, or to recognize occasions like Gay Pride Week, or Breast Cancer Awareness Month.

Um, we are assuming that the rainbow display for Gay Pride Week will look just like Rainbow Road from MarioKart and we are PSYCHED.

Of course, however, this project is not without it's criticisms. Drivers without E-Z Passes are supposed to have their license plate recorded, and a bill will be sent to the owner of the vehicle... which is already what happens when people skip on their fares now and the MTA is not so great at collecting the funds. 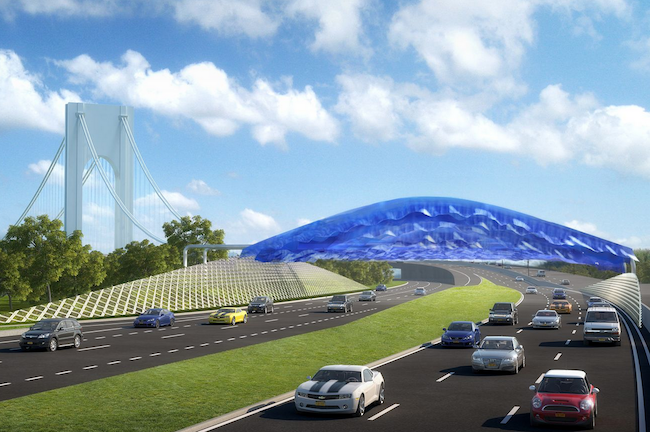 Cuomo is also calling for advanced cameras and sensors that will read license plates but also use facial recognition technology which is getting a liiitle Big Brother for us to just go with, even for Rainbow Road.

But when it comes down to it, some of us (maybe more than some of us) are willing to concede facial recognition for the estimated saved 21 hours of commuting time a year.

The New York Crossing Project is obviously incredibly ambitious and while the governor's office says they'll have updated the seven bridges run by the MTA by the end of 2017, we have a feeling we have a little but more time to speculate how the project will turn out.