It's a gimmick. It's a project. It's not interactive art. It's not some grand, sweeping political commentary hoping to affect change in some dare-to-be-better-than-what-this-country-has-given-you gesture.

Kalan Sherrard, a 28-year-old graduate from Oberlin college, dresses up with a stretched out leather mask of Donald Trump, stuffs a pillow under a white dress shirt, and prances about New York City begging New Yorkers to give him what they'd give the Donald himself.

Well, it gets weirder (we'll get into that later), and as with anything else in life, the weirder it gets, the more it costs. Case in point: Donald Trump.

If you haven't yet seen Kalan, well, you've been missing out.

We caught up with him in Union Square Park a few weeks ago. It took a second to find him. He hadn't yet gotten into costume.

"Who knew sometimes it's so hard to find boxes!" he texted.

Boxes? What the f*ck do you need boxes for? Oh. Right.

It was a modest turnout in Union Square back in March, but since then, he's gone from Union Square to Trump Towers to Times Square to Washington Square Park and the South Bronx for Bernie Sanders rallies, to Midtown outside of Grand Central for an anti-Trump protest.

It's a gimmick that was inspired by nihilist newscasting Kalan and a friend would perform on subways inspired by a British tabloid running a story about every ten minutes someone claiming to be sent back from the future to kill Donald Trump is sent to an American psychiatric hospital.

"It just seemed so obvious. Everyone hates this guy. Everyone would love to beat him up. A lot of people are dressing up as him. I mean, they're selling masks of him. This guy has become omnipresent in the media-- the global media. He's just on everyone's mind already."

Why? In the weeks between us snapchatting his display in Union Square to the night before Primary Elections in the State of New York, Kalan had told me he'd hoped to evolve the idea.

What would that entail? Something drastic like Donald Trump set to R. Kelly, a pun-fueled performance called Trump & Grind? Maybe something a little less easy to behold; a live Trump Steak Rub in which passersby can rub him with raw meat and spices while pouring a lovely port wine reduction over him?

Not sure if he takes suggestions, but if he does, those are two ideas just off the cuff that you can have.

Of course, they don't come anything close to the $800 "Cleveland Steamer" he advertises, or the $2,500 "Kentucky Klondike Bar," (which, according to Kalan-- yes, I'll spare you the urban dictionary look-up --is when you defecate, freeze the poop, and then use that poop as a... phallic, penetrative-- yeah, we're done here).

You would think that it really would have. Kalan's gotten solid coverage from this bit. He's been more present in New York City than the actual Donald Trump which, to be perfectly honest, surprised us both.

Of course, as is the way of New York, people like to take pictures for nothing. He's basically a politically driven Elmo in Times Square. That's definitely trivializing it, but the simple juxtaposition of a potentially violent Elmo with a sex-poop fiend Trump? Transcendent. Sort of.

"I’ve been to Times Square. One of my favorite things that happened during this was I got assaulted and humped by two Elmos simultaneously. It took a little coaxing for them to do it, but it worked.

"I’m a huge believer in street culture. I’ve been arrested several times for street culture, and I’m suing the city for one of those arrests. America is definitely one of those countries, we respect street culture the least. Most other places in the world, from Peru to Norway, they understand you're working."

"That's one of the happy things about this project is that I’m really able to go to town and say fuck you."

The gimmick may have peaked with his Easter Day stunt where he was spotted dragging around a cardboard cross in what he calls his most "obvious and banal (though curiously medieval) gimmick."

"I may be building another cross and dragging it the length of Manhattan." 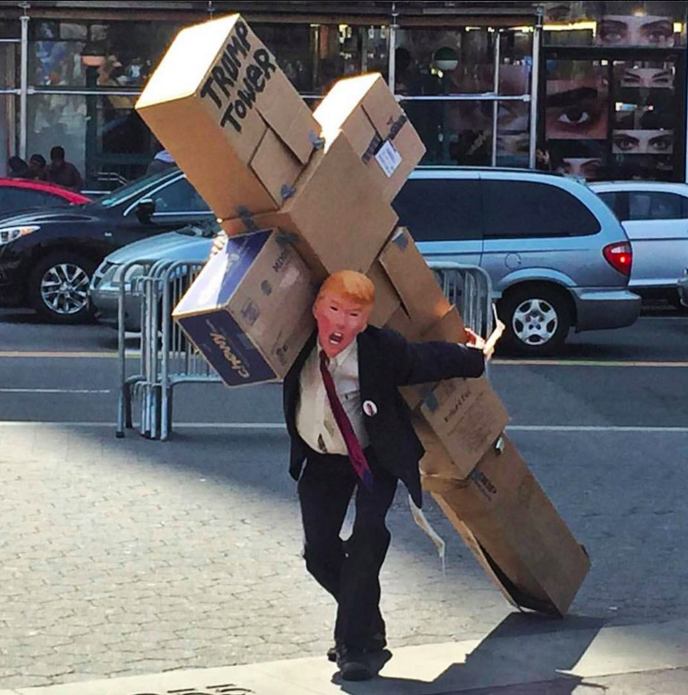 But it has evolved to an extent. It's become more of an immersive experience with the cast getting bigger. His friends join in the mix, interfacing with the crowd dressed as Melania Trump or CIA detail.

But that evolution, what does that do to transform or translate our understanding of the Donald as a man-- as a New Yorker, even? I asked him straight up because that's an important piece of the puzzle. New York values. 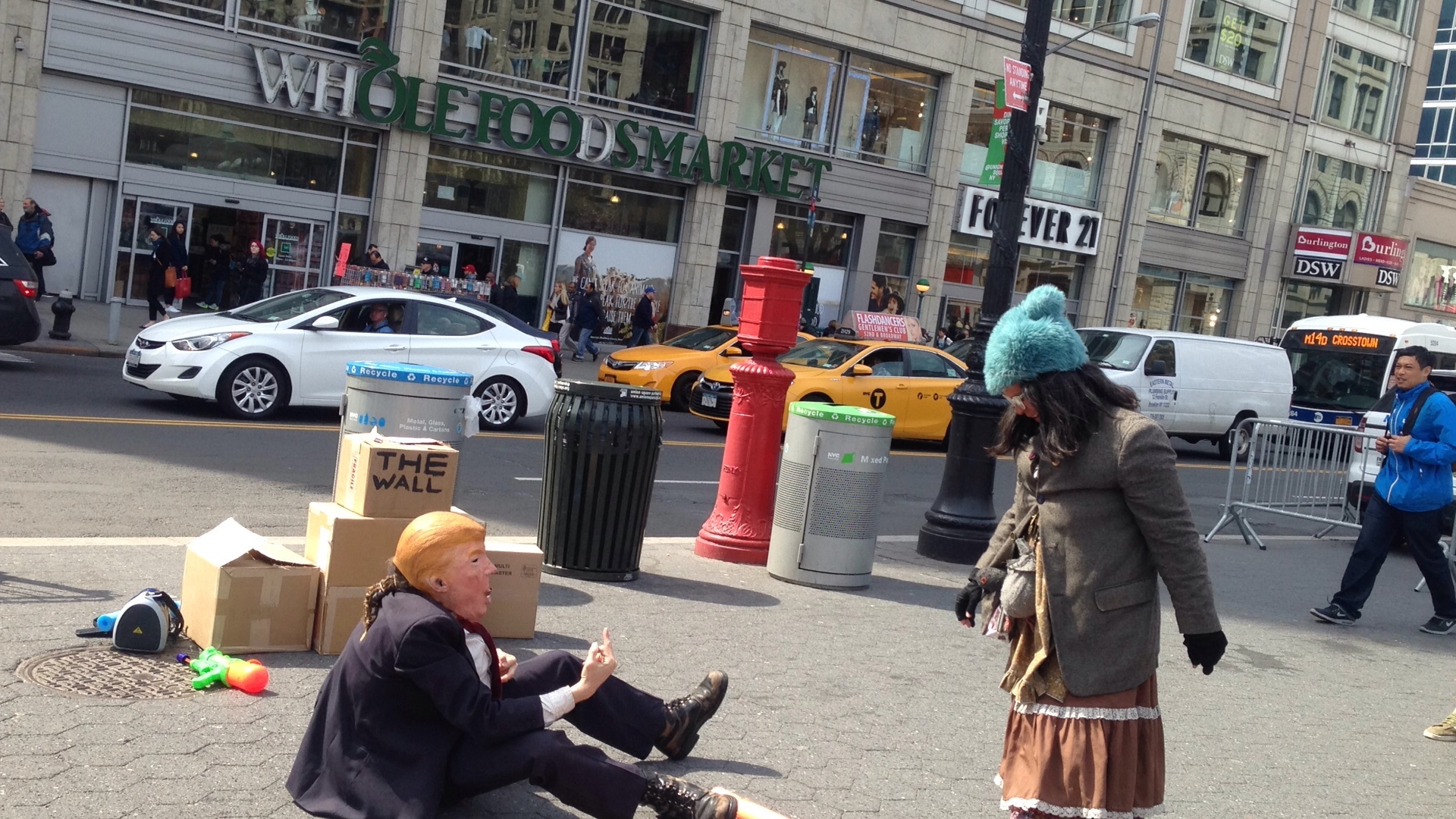 Does he hold them, embody them, or even understand what those are?

Does anybody? Is Donald Trump a New Yorker? What would the imitation say of its subject?

"I think he's kind of enigmatic. I think he’s, obviously he’s doing a lot of pandering. I think we have pretty different political outlooks, but he's uh... I mean, he’s probably a New Yorker. I don’t know. I don't know if I’m a New Yorker. I probably am."

You think of all of the ways to hate him for what he is and what he stands for that you dig so deep to touch on something so small and trivial as, "Well, is he really from around here, or can we kick him out of the club?"

But today's the big day; the day where we get to admire the beauty of true democracy in action, particularly with New York's warm, accommodating, highly-accessible closed primaries...

Yeah. About those primaries...

Did you know 27% of New York State's eligible voters can't vote in tomorrow's primaries because their party affiliations were not reconciled back in October (simple math-- f*ck you, math! --that deadline was 6 months ago... why tho?), the earliest registration deadline in the nation? Fun fact. You're welcome.

A nihilist, anarchist dressed as Trump voting in a primary election where more than 3.2 million people can't vote? Yeah. That's what political awareness actually looks like. Not the spectacle of the Trump punching itslef, nor the posturing of Facebook memes claiming, "The Revolution Will Not Be Televised."

"I’m a little bit anxious that my affiliating with anyone would bring them down. Bernie is the only one worth a damn. He's the only politician I've been following for the last five years. Right now, the one thing wrong with our political system is that you can buy votes. It seems totally fucking obvious to me."

"If he gets elected, I might have to rethink things about what I think about America."

Kalan's an anarchist, but not in the way you think because reading the word anarchist makes you think. It's not a call for lawlessness or chaos.

Everything from the prequel of WW1 with, to the "collectivizing of their shit," Kalan agrees with the idea of political revolution in theory.

"While I was in Spain, back in high school, and in the 30s and they collectivized all their factories and their land, and they were like we need to take care of women's rights, and do a careful analysis of class relations at the same time because if we wait on one of these things, we'll be fucked in the long run."

"A lot of people equate anarchism with some kind of chaos, and it's actually just one of the most organized, empowering communities."

Of course, if Sanders gets elected, he might have to reconsider what he thinks and knows about America. This isn't to say that Bernie Sanders is an anarchist. Far from it.

"All over the world Americans are considered to be these sort of ignorant boorish people, and to see the way people are rallying-- it's really incredible. He has a really profound analysis.

"He's not a special guy. He's not a radical. He's just got commonsense ideas."

"It's sort of like never in my wildest dreams would that person be electable."

If Trump ever does anything else absurd (well, beyond accidentally referring to 9/11 as 7/11), he'll likely try to capitalize. Like we both noticed, Trump has been surprisingly quiet in his visit to New York.

For now, look for Kalan in Union Square. Check out one of his puppetry classes, or check out his site right here.

Look for him? Sure. Chances are good that the search won't take long.

Check out Dennis Cieri, the Founder of the NYC Independent Film Festival.