Andrew, you’re scaring us with all of your announcements.

Governor Cuomo made his second large investment announcement on Wednesday at a luncheon for the Association for a Better New York , and the worrying part is that we’re left in the dark again about the specific funding source.

The Governor announced his intention to overhaul John F. Kennedy Airport; the terminal itself, as well as the highways and modes of public transit that lead to it, as reported by Gothamist.

In addition to new lanes of traffic at "choke points" on the Van Wyck Expressway, and at the Kew Gardens Interchange approaching the airport, Cuomo turned over the podium to outgoing MTA Chairman, Tom Prendergast, to announce two possible public transit options.

Either expanded capacity on the AirTrain to JFK— longer trains, more frequent departures— or a considerably more expensive "one seat" ride from Manhattan to JFK, eliminating the AirTrain transfer altogether.

We love comparing ourselves to others– and being the best, but this will be less logical in practice than in theory.

He also discussed a possible Jamaica Station overhaul, calling for a "much more sleek and modern experience" at the AirTrain transfer point— a "climate-controlled environment, with improved information about flights."

The JFK redesign is another addition to the list of Governor Cuomo's construction projects, following 2016 pledges to overhaul Penn Station, LaGuardia Airport, and the Javits Center (hopefully not around ComicCon).

Cuomo has stated time and time again about running for President in 2020. And it seems like his competitive nature expands globally, challenging cities like Dubai and Shanghai with their architectural leaps.

He reminisced about New York City's mid-century infrastructure push in his speech, as that was the time the LGA and JFK airports were built. "Since the '70s, what have we really done?" Cuomo asked, rhetorically (we think).

His plan also focuses heavily on the aesthetics and amenities. "We need world class amenities at all of JFK's terminals," said Tishman, CEO of Tishman Construction Company and the head of Cuomo's Airport Master Plan Advisory Panel.

"Fine dining, best-in-class retail, duty free, conference and meeting facilities." he continues. Perhaps a scheduling method that would minimize delays would be better. It's an airport, not a mall. 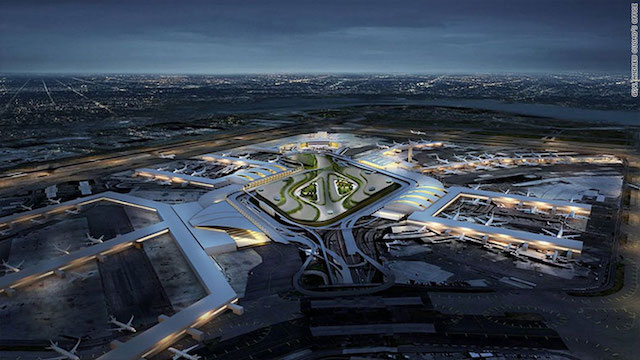 To be fair, it most likely will be slow. Like in the past. Combating the negative mentality, he mentioned the opening of the Second Avenue Subway extension a few days ago, between 72nd and 96th Streets on the Upper East Side.

"Anyone in Manhattan would have bet you that the Second Avenue Subway would never be on time," he said.

He didn’t bring up the expanded cost and time it took for the subway to be completed, or the uncertain future of its next proposed phase, which would extend the line up to 125th Street in East Harlem.

Well, we can only wait and see what else he has planned.