Where the F*ck Did This Come From? How Netflix's 'Stranger Things' Won the Summer of 2016

spoiled’s breaking down Who Won the Summer? with five different features from five different contributing writers and editors. If you’re looking to see who lost the summer? We got you right here. All of these features will be found in a special edition of our newsletter which you can subscribe to on the homepage.

If you haven't watched Stranger Things yet, literally what are you doing? What were you doing this summer? Being outside? It was disgusting!

We're sure Stranger Things would have been successful even if it wasn't the perfect excuse to stay inside, in front of the AC, but that certainly helped.

Netflix's runaway hit Stranger Things was a driving force of Summer 2016, bringing back '80s nostalgia and the kind of avid mainstream theorizing we haven't seen since LOST.

"Hey, what about The Walking Dead? Or Game of Thrones?"

NO. THOSE ARE ADAPTATIONS. Think about it, when was the last time we had to speculate "what happens next" without referring to source material?Stranger Things season 2 spoilers are un-Google-able or at least, can't be found in a comic book.

There are so many reasons why Stranger Things was maybe one of the most unique television shows we have been recently gifted, even in this straight up television renaissance we are experiencing right now.

The Jaws-esque monster that was also every bit as creepy as Alien. The SOUNDTRACK (the throwback hits and the score). Winona Ryder in the '80s as a mom instead of a moody teen.

We could tell you about how masterfully this short series was crafted. But let's be real, you don't win the summer just by impressing film students, otherwise we would just re-hash Twin Peaks (but you really should watch Twin Peaks).

1. It blew up overnight

Usually when people say something blew up overnight, it didn't. It's usually around, doing stand-up shows in small comedy clubs (Louis C.K. We are talking about Louis C.K.). Not Stranger Things. It literally took over the internet in merely a couple days, maybe a week, after the first season dropped on Netflix.

It seems like hardly a day goes by that there isn't a think piece, or a pic of Barb with a flower crown photoshopped on her head, or a piece of fan art on your Facebook feed, right? Let us remind you guys something. Stranger Things came out July 15th. That's less than THREE MONTHS ago.

Also, it's only eight episodes. So basically, let's say you have a full-time job, you work out, and you call your mom every week (good for you, *sshole). It would still take you a week/ week-and-a-half max to finish this series.

We're not sure if it's insane that it blew up so fast or it's even crazier that people are still talking about it.

While that christmas lights message board was basically made for meme-age, Stranger Things has proved itself as prime internet fodder.

And like we just said, for something to remain relevant on the interwebz for three months means it's basically vintage. Stranger Things definitely endured to populate our reddit feeds in large part due to the hundreds and hundreds of memes it has spawned. 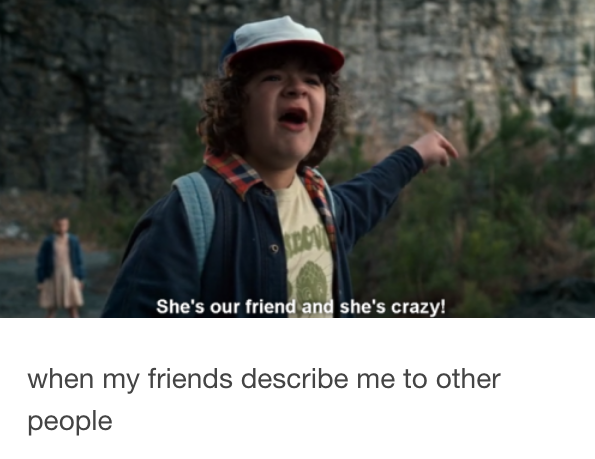 3. Stranger Things finally made '90s kids shut up about the '90s

The '80s are now the reigning throwback decade.

Move aside, Saturday morning cartoons. Whether it was Barb's high-waisted pants, Joyce's shaggy haircut, or the dozens of film references that made you want to watch everything from The Empire Strikes Back to Freaks & Geeks, the #nostalgiaporn was so strong.

Look at them! These. Kids. Are. So. Adorable.

Okay but actually, they are also incredibly talented. Besides being the most believable nerdy little group of friends since The Goonies, all of the kids' performances on Stranger Things were so insanely well nuanced. When the first episode started, we questioned whether the kids would be able to differentiate themselves from each other and we were straight up wrong to do that.

Spotlight on our homegirl Eleven: while El falls into certain tropes of the mysterious, ethereal girl (if you need more examples, watch ANYTHING by Joss Whedon), she is also dealing with seriously unique circumstances, including so much power that she doesn't know what to do with it.

She is also silent for a good majority of her scenes yet despite this, she's not just weird and angry all the time– we see her struggling, scared, internally conflicted, and eventually, strong. Snaps for her actress, Millie Bobby-Brown.

Okay, so, here's a disclaimer. Did we wish Winona Ryder had a character that wasn't crying for most of the series? Yeah. While of course, Barb can do no wrong, did we wish she wasn't kind of a d*ck to Nancy because she wanted to get it on with her boyfriend? YEAH. C'MON BARB (We're kidding, we love you Barb).

It also doesn't even pass the Bechdel Test, which is kind of strange (GET IT?) for a show that has three main female character, so no, Stranger Things was not perfect. However, the central arcs of the show revolve around the actions of Eleven, Joyce, and Nancy, even if they never interact amongst one another.

What we also appreciate is that none of the women on Stranger Things were perfect, either. Waaay too often, our media (our movies, our shows, our books, etc.) will hold up these "strong female characters" that are really just male action movie stars with vaginas and often, no clothes.

Is that the problem? Is that what people in Hollywood think women and people who support women want to see? White-washed Katniss Everdeens or the offensively over-sexualized Sand Snakes from Game of Thrones? There is something very underrated about female characters that are badass yet retain their feminine traits.

We've already talked about Eleven, arguably the most compelling character in the series (by arguably we mean unadulterated fact). Also, It makes sense that Joyce would be a distraught mess, despite having a clear mission to find her son. And we're thrilled that Nancy was smart, physically capable, and totally into her boyfriend (but ALSO calls him out on his sh*t and he LISTENS, Steve Harrington for Best Character Development 2k16). 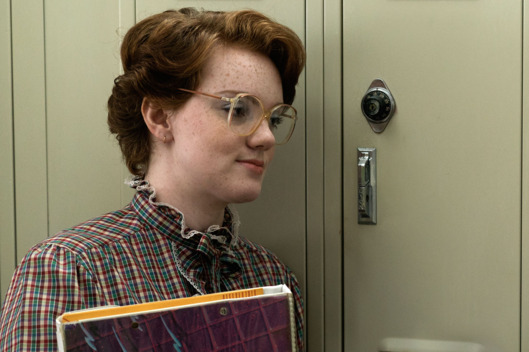 Perhaps the most inexplicable aspect of the Stranger Things phenomenon is the rise of Barb. Do you know how many scenes Barb was in? Six. That's it. Pretty much every single picture of her posted on the internet (and there are a lot) are of her in that one scene by Nancy's locker (see above).

Does anybody know how this character that appeared in a total of SIX SCENES became so popular? We certainly don't know. What we do know is that we love Barbara Holland. We're not sure why either. We don't know what she contributed to Stranger Things besides failing to shotgun a beer and letting us know Nancy has a new bra.

But we still could go on about Barb forever. How Barb's popularity is arguably due to how the show and its writers itself ignored her. When Will Byers disappeared, everyone in TOWN flipped the f*ck out almost as bad as they did in Gone Girl. So when a second kid straight up disappears... nothing happens??? Besides Nancy, literally nobody cares???

One of the strangest things in Stranger Things is WHERE THE F*CK ARE BARB'S PARENTS? #JusticeForBarb