Played the Game & Each and Every One of Us: How Frank Ocean Won the Summer of 2016

spoiled’s breaking down Who Won the Summer? with five different features from five different contributing writers and editors. If you’re looking to see who lost the summer? We got you right here. All of these features will be found in a special edition of our newsletter which you can subscribe to on the homepage.

Kim Kardashian might have broken the internet nearly two years ago, but let’s be honest: Frank Ocean did it better.

After a lengthy hiatus and teasing fans, he brought his A1 game with not one―but TWO albums.

The R&B artist exclusively released his 45-minute-long visual album Endless through Apple Music surprising viewers with never-before-heard-tracks. He later unveiled the icing on the cake (not Kim’s), with his second studio album Blonde (initially, known as Boys Don’t Cry) via iTunes.

Honestly, if that’s not worthy of Ocean winning the Summer of 2016, we don’t know what is.

Ocean also earned his first #1 spot on the Billboard 200 albums chart with Blonde, which sets him as the third-largest debut of 2016, behind Drake’s Views and Beyonce’s Lemonade.

Now, without further ado we broke it down for those of you who are still not convinced that Ocean has won the title of Summer 16.

1. All of the feels with great sound quality

Two minutes into listening to the Endless visual album and Ocean will remind you why he is so incredibly talented. His vocals while covering Aaliyah’s "At Your Best (You Are Love)" are magically ethereal.

The flow throughout the entire album of Endless is consistent. He delivers an impressive vocal range and a mature sound on this visual album and much of this vibe carries pleasantly into Blonde.

The quality of Ocean’s music on Blonde is different from his previous material. On Channel Orange, Ocean was smooth and accessible, whereas Blonde is experimental and very personal. He brings us a little bit of everything in this album, including gospel.

The rhythm on Blonde is fluid and the lyrics are relatable --- we get to feel this beautiful sense of raw emotion from the artist. Overall, Blonde serves as a journal at best, highlighting what Ocean has been through in the last couple of years.

I think it’s safe to say that even if you don’t listen to Ocean’s music, you’ve definitely heard his name. The way the media and fans talked about him you must have wondered, "Who is this guy?"

On February 2013, the star had confirmed that he was working on his second studio album. Then in April 2014, Ocean stated that his second album was nearly finished.

Ocean was originally expected to drop his new LP in July 2015, but it never came. Later on, around March, the producer of his previous album painfully teased us in an interview with Pitchfork that it will probably be coming out in a month.

Press coverages were announcing left and right the launch of his anticipated album and fans were all over the internet searching for clues. Ocean had even updated his website with an image of a library checkout card marked “Due Date” and labeled with Boys Don’t Cry at the bottom of it.

The R&B star seemed to hint on this library checkout card that Boys Don’t Cry would be released in July 10th, but alas, it came, went, and still no album, leaving a slew of fans frustrated, hopeless and confused.

Then the media got seriously involved. Thanks a lot, New York Times.

Let’s face it: this young artist scores major points simply because he played the game and he played it well, folks. All along he had us under his charm!

Let’s be serious: after four years of impatiently waiting and being depressed, we could have all teamed up and wrote some songs to help Ocean come out with an album. However, good art takes time, and he didn't disappoint.

In the end, we can’t complain because Ocean spoiled us. As much as we hassled him, he really came through with some great material for us to enjoy.

Ocean gave us a visual album, a second studio album and even a magazine. The magazine actually goes by the “famous title” of Boys Don’t Cry, where he features Kanye West, Lil’ B, and more.

4. The Biggest Tease Ever

The joke’s on us, here. Let’s not forget that Ocean popped up on West’s The Life Of Pablo earlier this year, but did not appear in the “Wolves” music video.

Ocean took us on an emotional roller coaster, but finally, after slowly releasing hints here and there, he made his surprise appearance. The R&B recording artist unexpectedly updated his website launching a mysterious Apple live-stream which we later came to learn as Endless.

After releasing his black & white visual project Endless, the R&B recording artist arrived with yet another music video titled “Nike,” the leading track off his second studio album Blonde.

Ocean was strategic about his release from the very beginning slowly giving everyone a taste of what was to come.

The next day, the critically acclaimed artist released his Boys Don’t Cry magazine at pop-up shop locations in New York, London, L.A., and Chicago. Fans were able to receive a free copy of the magazine, which was accompanied with his new album Blonde.

5. Real with his identity, music and image 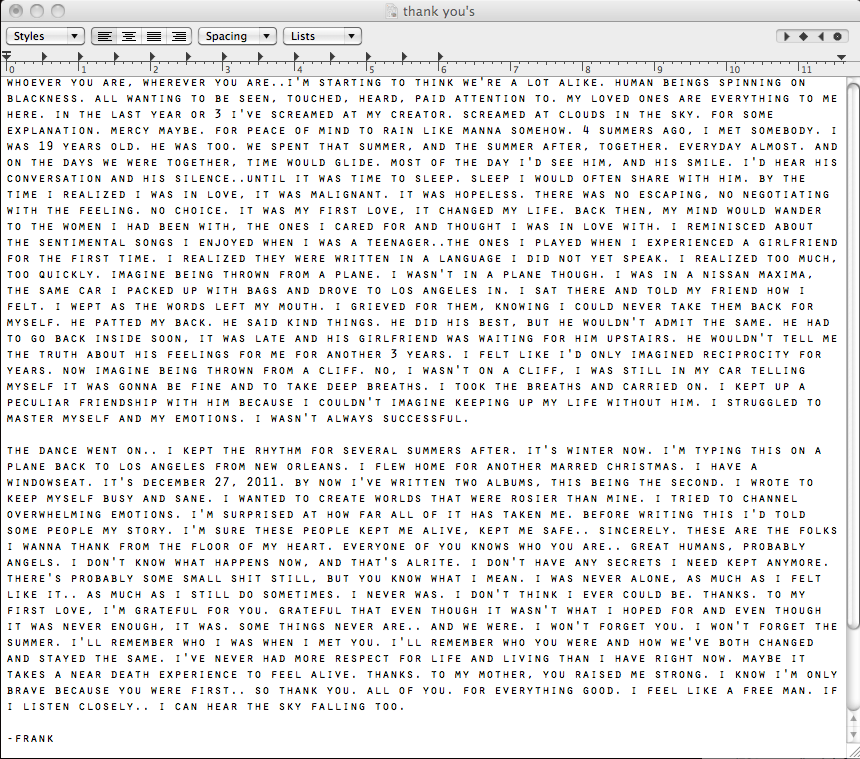 In 2012, on the cusp of his Channel Orange release, the young singer revealed about his first love. Via Tumblr, Ocean opened up about a young man that he had spent a handful of summers with at the age of 19.

It was a defining moment for music and the world, the enormous bravery that it took to discuss his sexuality gave hope and light to others struggling with the same issues:

"Whoever you are, wherever you are... I'm starting to think we're a lot alike," the singer begins. "Human beings spinning on blackness. All wanting to be seen, touched, paid attention to."

The lengthy letter, titled "thank you's" gave details on the relationship Ocean had with a man, who turns out had a girlfriend. "He wouldn't tell me the truth about his feelings for me for another 3 years," Ocean continues before adding, "I couldn't imagine keeping up my life without him."

In the letter, Ocean also describes this sort of claustrophobia that he feels with cars because of his experience with this man.

It’s a sentiment that follows through in Blonde with his album art. He even takes to Tumblr once again, to share a two-page spread from his Boys Don’t Cry magazine explaining about an image that he found two years ago about a girl with blonde hair covering her face and feeling trapped with a seat belt reached across her torso.

This car obsession and the image of the girl is a symbolic sign of his sexuality, gender and race. Like the girl, Ocean felt trapped inside a car struggling with his identity.

By declining to claim an identity, Ocean maintains the right to dynamically redefine himself on all aspects of his art and his life.

On Endless, apart from his cover of Aaliyah. I also enjoyed “Alabama” the symphony of his voice and the silky tones of Sampha gave me the ultimate chills.

On “U-N-I-T-Y,” Ocean’s delivery is confident and the flow in this track is truly beautiful. My other favorite tracks from Endless include, “Commes Des Garcons,” “Wither,” and “Rushes.”

On Blonde, I really enjoyed “Nikes,” this track is experimental and amazing. I also love “Ivy,” you can feel the influence of the Beach Boys on this particular track. It’s definitely one of those tracks that I don’t get tired of listening to over and over again.

Next, would have to be “Pink + White,” this song hit me immediately. It has such a nostalgic feel to it. Other favorite tracks include: “Self Control,” "Solo," “Nights,” “Close To You,” “White Ferrari,” and “Godspeed.”