We love more than two things, but it just so happens that these two things intersected in the unlikeliest of places on the day where we're all too susceptible.

If you've ever tried to get free tickets to a Hamilton show, you've more than likely been burned in one way or another. Even this morning we turned to our trusted friend The Internet to look for help, and we honestly thought we'd found something.

Brokelyn announced that Hamilton would take part in Prospect Park's 'Broadway in the Park' series and that the cast would perform the full show for free.

They were quick with every detail: the cast wouldn't be performing in full costume because of the late August heat; it's such a hot ticket they're blocking off the bandshell so you can't sneak in; and, most importantly, the tickets would only be available over the phone so the site didn't crash.

If you want to call, go ahead. We did.

Oh, what's that? You just put in a call to Trump Campaign Headquarters? Yep. Best prank ever. And all of the clues were there.

Look at the caption of the photo.

"Imagine this but a very yuuuuge audience."

If you didn't want to get made, you had to read to the bottom of the article. Of course, once you've been reading about free Hamilton tickets and you get instructions to call a phone number, what do you do? If you're anything like any rational New Yorker dying to see the show, you stop reading and call ASAP.

That's what we did. All you had to do was read the next sentence: "And if you get an extra one, it sure would make America great again if you took us." F*CK. They got us.

So, Tim Donnelly of Brokelyn, well played. You got us. You got America. Admittedly, we feel dumb. 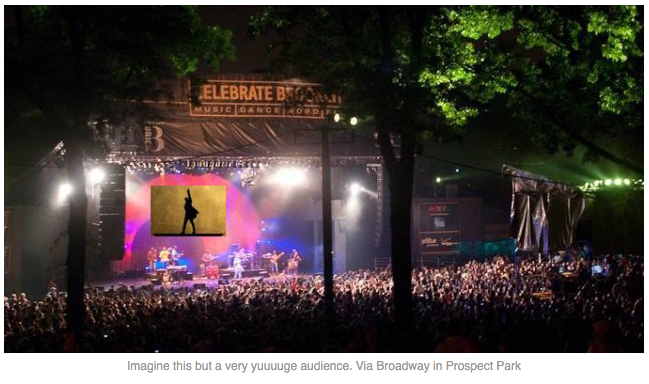 But think of how brilliant this is. Everything made sense: Broadway in the Park to celebrate the 240th anniversary of the Battle of Brooklyn. Warm fuzzies for free art to celebrate Revolutionary War history with a musical redefining how that history is told? Sign us up!

Two things here: Broadway in the Park is in Bryant Park, and the Battle of Brooklyn isn't something we'd want to commemorate here. We lost that battle pretty badly.

Regardless, Brokelyn got us. They might have got you too. Let's commiserate shall we?

We're thinking drinks at a swanky spot in the Meatpacking District. Say... No. 8?

Cool. We're already planning on going there with our friends from Tequila Avión and The Hidden Sea Wines for a one-hour open bar.

We're giving free spoiled shirts and other swag, and no, that's not a joke. Get your tickets here.

Check out This Unforgettable 1970s-Themed Room Feels Like a Basement House Party.