Love it, hate it, whatever, New York might be a land of Hillary, but New Yorkers are still feelin' the Bern. And for good reason, depending on how you feel about student debt.

Standing alongside Senator Bernie Sanders at a community college in Queens on Tuesday, Governor Andrew Cuomo announced a proposal to eliminate tuition for hundreds of thousands of public four-year and community college students across the state.

As reported by Gothamist, the proposed plan would provide full tuition relief for individuals or families who make $125,000 per year or less.

"If you want to offer everyone a fair shot, you have to get up to date and say, 'What high school was 75 years ago, college is today,'" Governor Cuomo told a cheering crowd on his proposal to eliminate tuition.

We wait with baited breathe, since both candidates have tried to propose free tuition programs in the past. But we are optimistic.

Cuomo, who appears to be considering a 2020 presidential run (fingers crossed), was also careful to contextualize the announcement. "It should be a wake-up call to this nation," he said.

Honestly, we personally think Trump being our future President is the loudest wake-up call America has ever had. Former Democrat Bernie Sanders takes the stand.

"If New York does it this year," Sanders said during his own remarks, "mark my words, state after state will follow." Today the average annual tuition for a Bachelor’s degree through CUNY or SUNY starts from $6,330, and an associates degree at $4,350.

In 2015, the average student loan debt in New York State was $29,320.The proposed scholarship would be accessible to about 940,000 families, according to the Governor.

Students would have to be enrolled in a SUNY or CUNY school full-time to qualify—a qualification Cuomo says will motivate students to complete their studies on time. This would help students that are forced to study part-time to support their education and themselves or families. 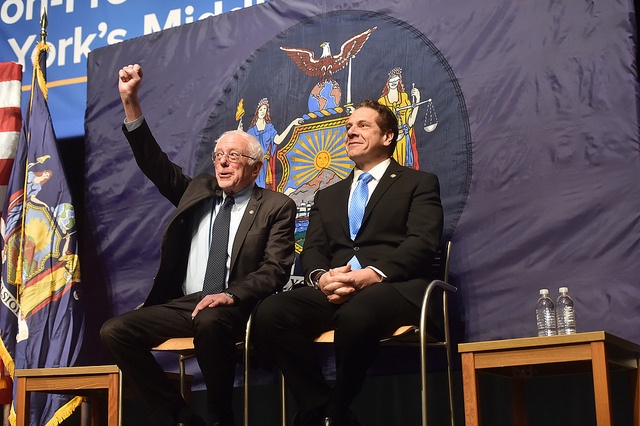 Named the 'Excelsior' Scholarship (calm down Marvel fans), the program would cover the remaining cost of tuition after state and federal scholarships have been exhausted—a "last dollar" funding structure. New York State offers close to $1 billion in grants to college students through its Tuition Assistance Program.

"'Last dollar' means that after the student as exploited all of the other possible sources of financial aid, then if there is any tuition remaining, this scholarship will cover that," said Professor Thomas Bailey, director of the Community College Research Center at Columbia University's Teachers College.

"First dollar" programs cover tuition in addition to state and federal aid, meaning low-income students who also qualify for the Pell grant get more aid overall and less debt to owe in the long term. If a student owed less debt, that in turn can improve the economy because the student would be more willing to buy a house, a reasonable car, and in general partake in out consumer based economy. But they can't do that if they can't consume.

"If it were 'first dollar,' then it would help the people who really need it the most," Thomas Bailey says. "And it would give them additional money for living expenses, which are crucial."

"Our job is to encourage every person in this country to get all of the education they can, not to punish them for getting that education."— Bernie Sanders  tweeted.