We are all figuring out and adapting to the always-changing world today.  You can find it in how local restaurants are dealing with hosting and seating. Or you can see how today's artists, DJs, or stand-up comedians are changing with how they're interacting with their audience and their respective craft.

We recently had a chat with NYC comedian and actor Gianmarco Soresi, about his latest Amazon Comedy Special Shelf Life, what it's like being a comic in New York today, and what comedy can teach us. 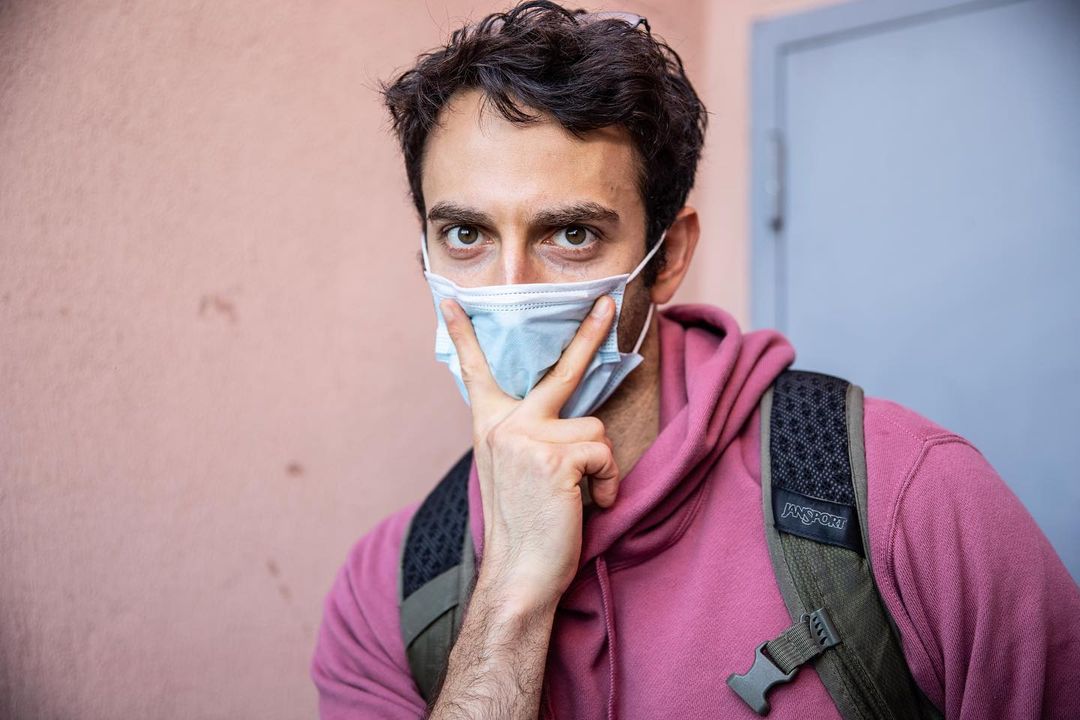 What was the first thought you had when NYC announced the lockdowns in March?

The first thought I had was, “Oh my god, what if this lasts for, like, three months?” How young and naive I was...

The weekend before the city officially shut down, I was supposed to headline a casino in Atlantic City. Several (of the smarter) comedians in the comedy community were posting how we should all stop doing shows because it might help spread coronavirus, but I was nervous if I canceled the gig, the casino would never book me again. Such is this business. Fortunately, the booker graciously understood my predicament and let me off the hook, and several weeks later, the casino management completely changed, so it didn’t matter at all! Such is this business.

The beginning was truly dreadful. One day it seemed like things would be back by summer, and then an hour later, people were claiming stand-up comedy would be dead by 2022. In the last few years, I have, arguably, put a couple of too many eggs in the stand-up comedy basket, so I was utterly terrified that my dream had been forever crushed. But stand up is the cockroach of art forms, and within weeks, people were producing Zoom shows, Twitch shows, Instagram Live shows, most of which were utterly dreadful, but I’m an addict for attention and clung to whatever weird, buffered laughter I could get. I also did all the things everyone did, got slightly better at cooking, almost finished a book, and finally watched Schitt’s Creek.

The first thought I had was, “Oh my god, what if this lasts for, like, three months?” How young and naive I was...

Then sometime in June, there was the first (extremely) socially-distanced outdoor show on a truck bed. I went up for 30 seconds, my first joke bombed, and the cops immediately shut the show down (I don’t think it was because of my bombing, but the timing was uncanny). So it was back to Zoom shows for a bit more until finally Stand Up NY, and then other clubs and independent producers, figured out how and where they could run safe outdoor shows.

Now I get just enough stage time to keep myself from attempting to cook again, but it’s a tenth of what it used to be. So I’m trying to make the most of what I can get, embracing the other forms of content creation, and maybe eventually finishing that fucking book. 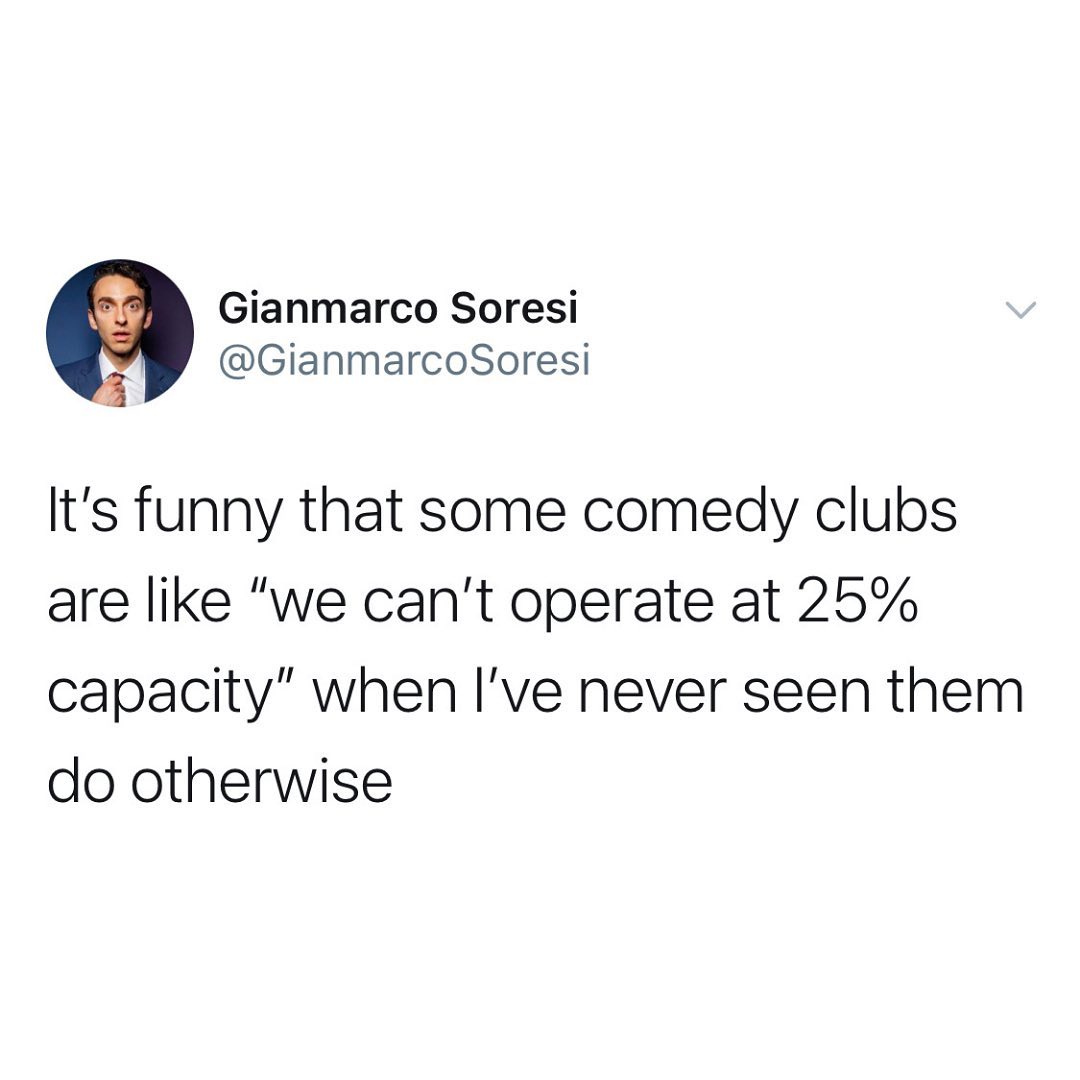 What was the one thing you came close to hoarding on?

I’m a gum guy, so I bought these ridiculously large packs of sugarless gum off Amazon to keep me from eating everything out of sheer boredom. I’m chewing gum as I type this. My jaw is super fucked up.

What’s your take on James Altucher’s take that New York is dead? On Jerry Seinfeld’s response?

Well, James Altucher is a co-owner of Stand Up NY, which has kept me employed this year, and I’ve idolized Jerry Seinfeld since I was a child, so all I can say is they’re both incredibly sexy, intelligent men whose net worths I aspire to have someday. Whether New York is dead or not, I will be here telling jokes to strangers.

It can even feel good to hear a wildly insensitive joke about the oxygen-deprived death we’re all secretly fearing every time a stranger coughs on the bus.

Humor's been said to be an antidote to grim and morbid reality. How has humor and comedy played part in getting through it for all of New York?

I am definitely not one of those “humor is the best medicine” people, but I think that’s partly because my life is filled with comedians. For those not as lucky/cursed, it can be a relief for someone to point out the absurdity in the otherwise miserable time they’ve had going to the grocery store in a mask in gloves.

It can even feel good to hear a wildly insensitive joke about the oxygen-deprived death we’re all secretly fearing every time a stranger coughs on the bus. A lot of dreadful shit has happened, is happening, and will happen, and comedy will not change that. But it can make living through it more enjoyable. 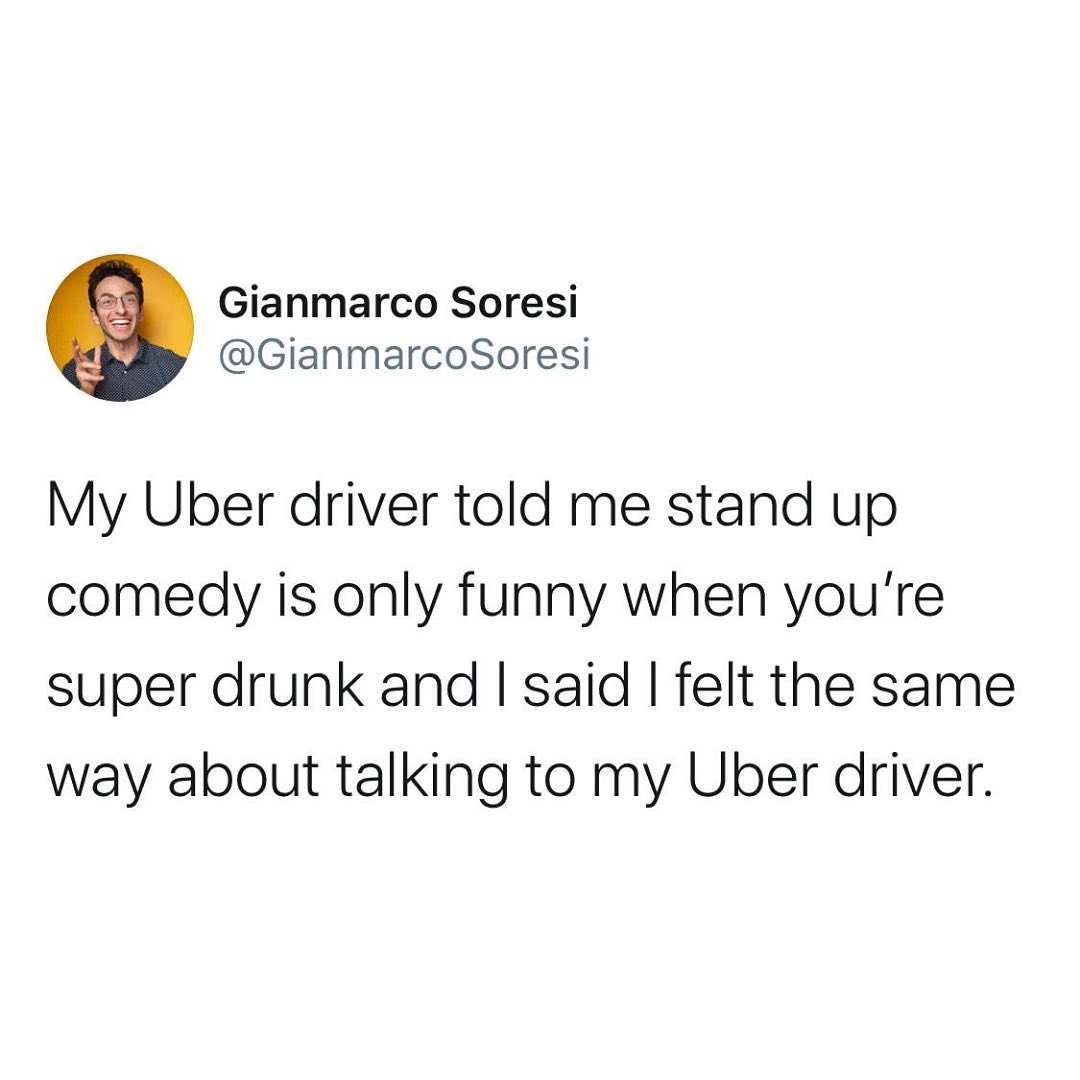 What were the thoughts on the timing behind your release? Was it sooner than you expected?

The title Shelf Life refers to the shorter-than-normal shelf life jokes have these days, which is why we’re releasing the special as soon as humanly possible. When shows started coming back (first over Zoom in April, then gradually in-person outdoors come June), every comedian had to figure out ways to adjust their act (you can’t say, “so I was at a party last night…” as a set up anymore).

Some chose to add addendums (“so I was at a party...last year), some wrote new material, and others bravely regurgitated the same hacky bullshit they’ve been saying for the last decade. I (mostly) went with the second option because it felt insane to be doing a socially distanced outdoor show in the rain without mentioning the world is on fire.

I knew this meant that by 2021, most of my new material would be outdated. I had to figure out ways to milk each bit for all it was worth, whether it was putting the jokes on social media, turning them into sketches on TikTok, or, ultimately, releasing them all as a special. And I hadn’t planned on even filming one until someone (Netflix, please someday maybe) asked me to.

Usually, if I were to film something at this scale, I’d be running the set for months on tour. Many of the jokes would be ones I’d honed for years, but I no longer have any clue when touring comes back or, with the way things are going, how much longer I have left to live, so I’ve left perfectionism behind in favor of getting something done.

Even with the quick turnaround time, though, some of the jokes may have already expired! While most New Yorkers were celebrating the president’s coronavirus diagnosis, I was terrified for all my Trump jokes. But I hope the jokes will stand as period pieces, whatever comes in the next few months, and that “Shelf Life” will be looked upon less as dated and more as a time capsule of a particularly fucked up time in America’s fucked up history. 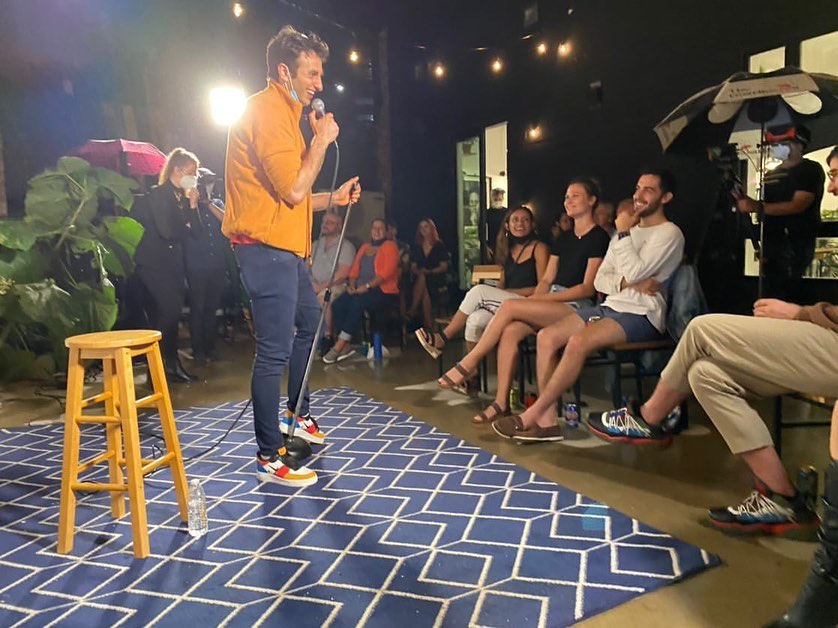 What are you most excited for people to take away from Shelf Life?

That stand-up comedy can and will survive. It’s perhaps one of the most malleable art forms, capable of responding to the everchanging world around us in a way that makes it a valuable institution deserving of support (financial and otherwise). The most important takeaway is that people decide to buy tickets to see me live whenever the goddamn vaccine comes out.

What are you looking forward to in 2021?

I am trying so hard not to be over-optimistic, but I believe there will be more partial-capacity indoor shows. Maybe my home club LOL will reopen; all I want is stage time to work on new shit.

Based on the crowds at the few live shows I’ve done, audiences are starved for live entertainment, and I hope that enthusiasm (and ticket-buying) eases the mess of every unemployed artist trying to get their careers back on track. I have a handful of gigs that were canceled this year rescheduled for 2021, and with any luck (and President Biden, thank dear god), they won’t need to be rescheduled again.