#MedalCount: The 9 Funniest Memes From the Rio Olympics

We're totally bummed that the Olympics are over and we're going to have to wait four more years until the next one. Winter doesn't count. Yeah, we said it.

Even if you know jacksh*t about any of the sports (please google race walking), in the digital age, you can do all of your spectating on the internet. You can just let a comedian explain everything to you or ignore the athletics all together in lieu of speculating on Olympians' sex lives.

Since this was a particularly eventful and at times, straight up weird, Olympics, the internet has been on their collective A-game.

We've rounded up all the gold medalists.

... Just saying, meme-ing is totally an Olympic event we would stand behind.

when you get to the staff meeting and all the good snacks are gone #PhelpsFace pic.twitter.com/R7MOy1Um51

But it was representative of a simpler, less confusing time in the Olympic games– that didn't involve public urination.

Honestly, this cupping thing is getting out of control. pic.twitter.com/wxUguz2dea

We were just glad to have an explanation, tbh.

This is the last one with Michael Phelps, we swear. 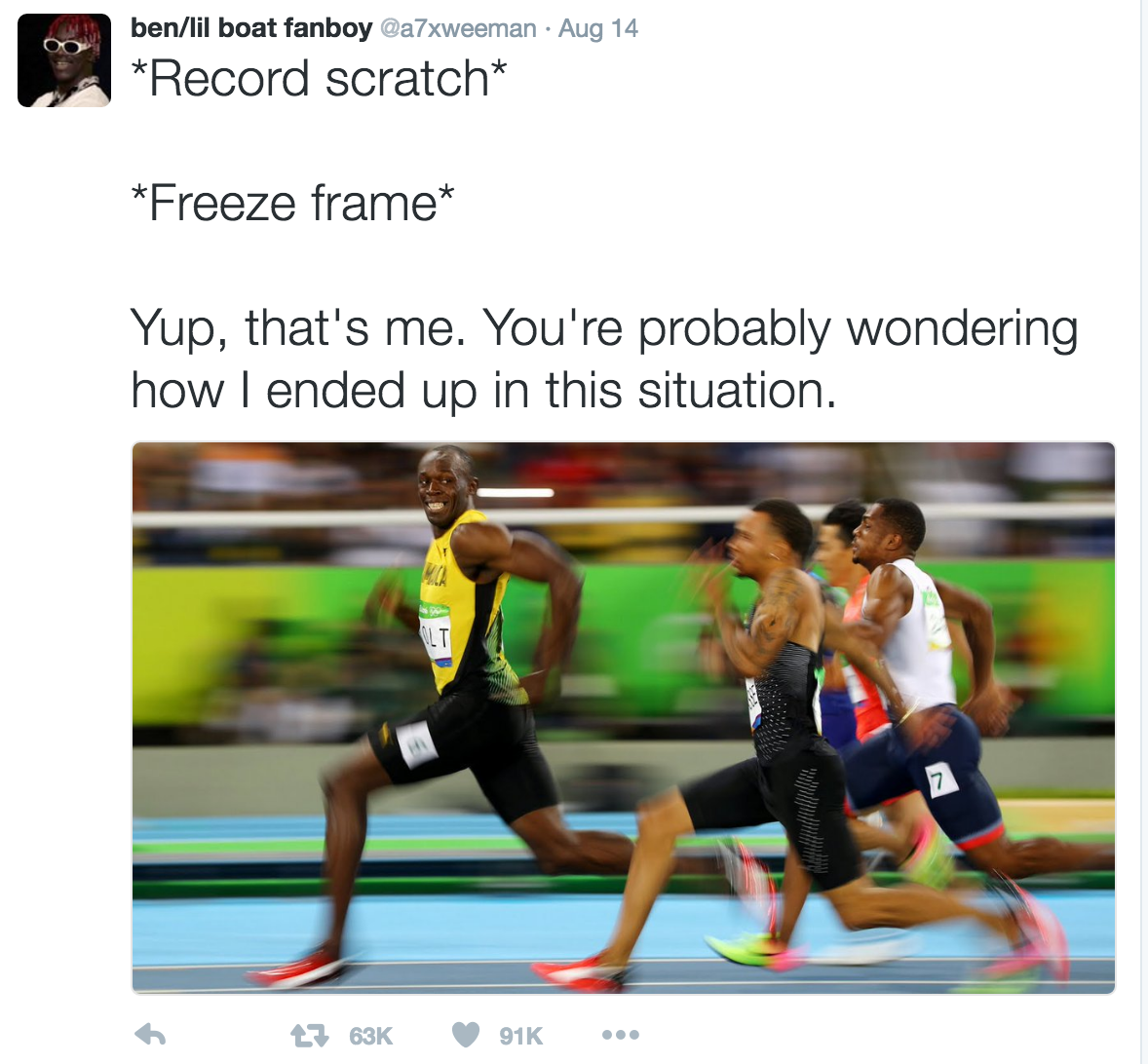 While #3 does make for a super inspirational poster, it's worth noting that sometimes, it doesn't f*cking matter where you focus because Usain Bolt is just that good.

You might've noticed that Ellen Degeneres got in on Usain Bolt's prime meme-ability too but we are literally not going anywhere near that for everyone's safety. You're welcome.

I like this one. Looks like a close race until you realize Ledecky is going the other way. pic.twitter.com/ncE5APvO50

As city folk, we are alarmed by the fact that elsewhere in the country, they are raising fish people.

When you see your crush from across the room! 😉💅🏽🇺🇸 ... #LaurieHernandez #Olympics pic.twitter.com/NHAuBZ1xiC

Be still our hearts.

Mom: Where's he from?
Me: Tonga
Mom: Ah, my new favorite country...#TongaFlagBearer pic.twitter.com/AsWiZYvPzU

This is from the Opening Ceremony, but how could we ever forget this guy?

You know you f*cked up when corporate Twitter shows up.

Image of Ryan Lochte when he arrived safely to the U.S. pic.twitter.com/JkOd1KZ43z

Last and least. Sure, national embarrassment Ryan Lochte basically validated the world's hatred for Americans in one fell swoop but it made for some A+ meme-age.