#KillinIt: That 'Floating' Park on the Hudson River Has FINALLY Been Approved!

Despite the love we have for our urban jungle, it's literally just a pile of steaming concrete, so we appreciate anyone trying to add more green spaces to New York City.

Last year, construction began for like the mother of all dope green spaces, at the Hudson River Park at Pier 55.

Sorry, correction, this park would be sitting just off Hudson River Park at Pier 55 because it's a floating park on the river.

Time Out points out that it's not reaaaally floating, it's gonna sit on a bunch of lily-pad shaped piers that "raise out of the water at varying levels to create an undulating island," but WHATEVER it's a floating f*cking park.

Because no one wants us to have nice things, last June (of 2015), The City Club halted the progress of the park by filing a suit with the State Supreme Court in Manhattan, who we feel like has better things to do than stop cool parks from being made.

According to Time Out, the suit "called into question the way that the Hudson River Park Trust, which oversees the plan, awarded contracts for construction" and claimed the park was planned secretively to hide potential adverse impact on Hudson's ecology.

That kinda sounds legit, but we are blinded by our need for chill space on a floating park, #SORRYNOTSORRY.

They also demanded an Environmental Impact Statement and since we watched Parks & Recreation, we know what that means. So big thx to the NYC version of Leslie Knope who is making this park happen.

Last week, the Manhattan Appellate Division gave the park the green light and told The City Club they "had no authority to challenge the Trust on either the park’s construction or its earlier determination that the proposal posed no environmental hazard" which is basically a 20-ish word way of saying STFU.

Since the work on the park has resumed, it's still gonna move towards a 2018 opening. Yay! 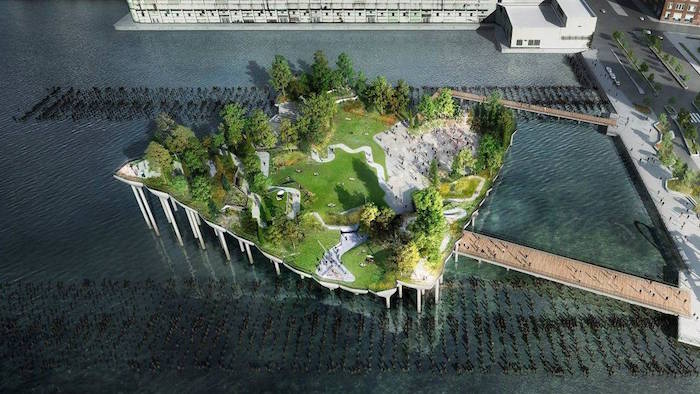