Safe spaces. Liberal sensibilities. The get over it and move on already. Protest peacefully—but not like that; no, you’re still doing it wrong. Fake news, even.

There’s a weird bit of a taboo right now surrounding the idea of living in “bubbles,” and it’s very easy to feel powerless to escape, should you even feel compelled to escape to begin with depending on what kind of bubble you’ve got.

But, chances are, as a New Yorker, you’re feeling a bit stressed right now, and maybe a little lost. Particularly here, now, January 22nd, two days after Trump took office. The familiar is skewed, we’re in a weird upside down world inhabited primarily by slugs, and the future is dark.

“The future is dark, which is the best thing the future can be, I think.” - Virginia Woolf wrote in her private journal, dated January 18th, 1915, a century ago. While the world rocked from the throes of WWI, Woolf remained cautiously optimistic for the unknown, the untried, the unseen, the unfelt.

The Bushwick-based production duo known as Domino V and The Glitter Viking / DVGV Productions, self-described “responsible hedonists,” have created an opportunity to embrace this idea of the unknown as intimately as you might possibly imagine.

It’s called Exploring Alternative Intimacies, an 8-week workshop series that delves into the profound, yet usually undervalued health benefits of physical intimacy when the baggage associated with sexuality is taken off the table, held in a recently renovated private event studio in Bushwick, Brooklyn.

There will be 8 weeks of different workshops every Monday evening starting this past Monday, January 16th. Each class will be focused on a different non-sexual physical intimacy. This isn't your average course list however, as they’re offering things like Massage, Sound Healing, Advanced Cuddling, AcroYoga, Guided Meditation, and more.

You can either come on your own, with a partner, or with friends, but the whole point is, there are no expectations or standards you must adhere to other than agreeing to the rules of the space and “consent containers.”

With the noise of the inauguration peaking beyond coherence, their workshop series is a much-needed opportunity to immerse ourselves in an accepting environment focused on community. "We are providing a venue for people to build intimacy, connect, and enjoy what it feels like to come together as humans. To put aside so much of what tends to divide us when once we start talking about politics, or any number of things where we might have a difference of opinion,” said The Glitter Viking.

The next workshop, Sound Healing with Andriana Santiago is on Monday, January 23rd, from 7 p.m.– 10 p.m. Experience the healing power of sound, lead by Andriana Santiago: songwriter/producer/vocalist, co-founder/owner of La Luz and Demo Love Music.

Our intention as a community is to have a positive outlook on human sexuality and to encourage people to embrace what they feel and to move towards as just a sense of their own personal liberation. We understand that everyone is going to do it differently to a degree. At our core, we’re responsible hedonists.

Andriana will present an immersive multi-sensory healing landscape through a combination of analog instruments, electronic music and projected visuals paired with guided meditations. During the workshop, healers will share one-on-one temple massages and intimate sounds such as tuning forks, chimes, and Tibetan singing bowls.

Participants will also experience gifting these healing experiences to one another. Comfy clothes encouraged and participants should expect to recline on cushions for much of the workshop (pillows and cushions provided). Andriana will also provide instruments to be played by accompanying musicians and experimented with by workshop attendees (no previous musical experience necessary!). Interested? Of course you are! Check out the full schedule of Exploring Alternative Intimacy workshops here and snag tickets to the next volume, Sound Healing with Andriana Santiago here.

The Bushwick venue address will be emailed upon ticket purchase. Tickets for each workshop are $15 available only in advance. Space is limited to under 30 participants per workshop.

If this altruistic, inspiring sensibility sounds like something straight out of Burning Man, you’re not wrong.

“Burning Man represents a large group of self-selecting people agreeing to live by a certain set of guidelines focused on personal responsibility, community empowerment and creative expression. With that foundation, mountains can be moved,” Domino V told us.

“I was astounded by the sheer immensity of Burning Man, and how peacefully everything worked. The intrinsic need for collaboration and how it led to such a vast network of large scale art installations appearing in the desert.”

“We create the society we want to live in. In light of the scary things we’re often hearing, especially with minorities and the LGBTQ+ community being targeted, it’s so easy to feel powerless, ‘What can one person do?’ When you think about the magnitude of 70,000 people in the desert, coming together and making epic shit happen, you have to see that there is a lot we can accomplish,” she added.

Like many New Yorkers, their call to action was spurred by the election results. After dealing with first shock, they were motivated to find a way to spread more understanding and connection between people.

"The big word of this election cycle was 'division,'” Glitter Viking elaborated. "We made a pact to promote ideas of bringing people together, and breaking lines of division between them. We’re very passionate about giving people an experience that they can contextualize into their daily lives.”

While their call to action was rooted in the unknown, it’s their personal experience that informs the beauty of what they’re doing and why it works.

Domino V has family experience with caring for someone who became nonverbal, her mother, formerly a classical pianist and music teacher, ill with dementia for many years.

“It was through that experience, I realized how much we focus on verbal communication, but there’s this whole other realm of connection, that we’re not really encouraged to explore.”

For The Glitter Viking, a massage therapist of 12 years, his experience has directly informed the way he interacts with his 5-year-old daughter. 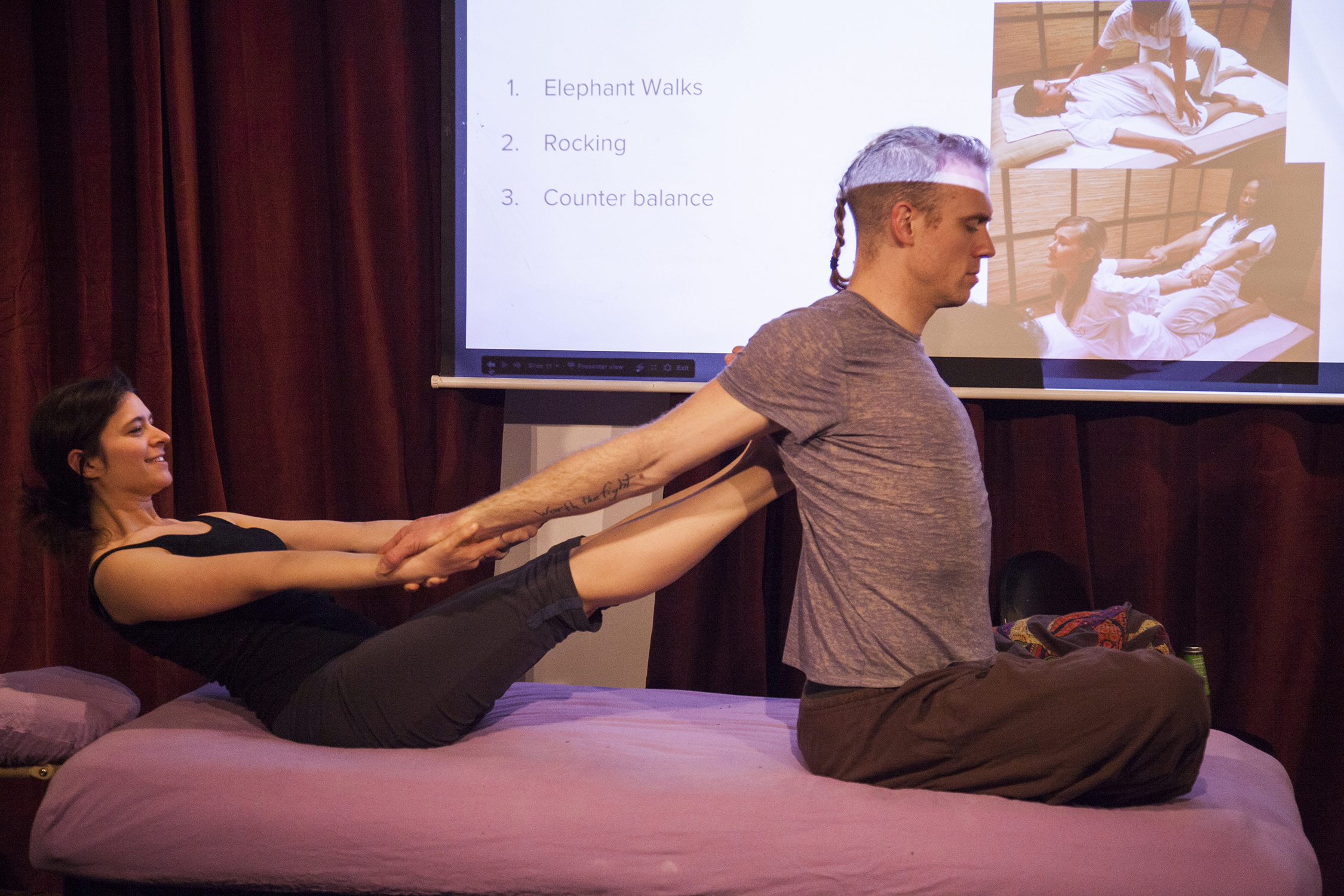 “I have a 5-year-old daughter who at 15 months experienced a huge regression. We initially thought it was autism, but it was actually a neurodevelopmental disorder called Rett syndrome. Her brain is fully functional, she can understand everything, can answer questions, but she can’t speak effectively. As she gets older, and her peers start to talk to her more and more, they’ve found ways to communicate in nonverbal ways. She uses a device to speak, with the movement of her eyes.

Knowing how much goes on inside of her, and finding ways that I can show her comfort and how much I care for her — just that basic connection — and having that option taken away from us has actually opened up this incredible bond between us that’s not just physical. 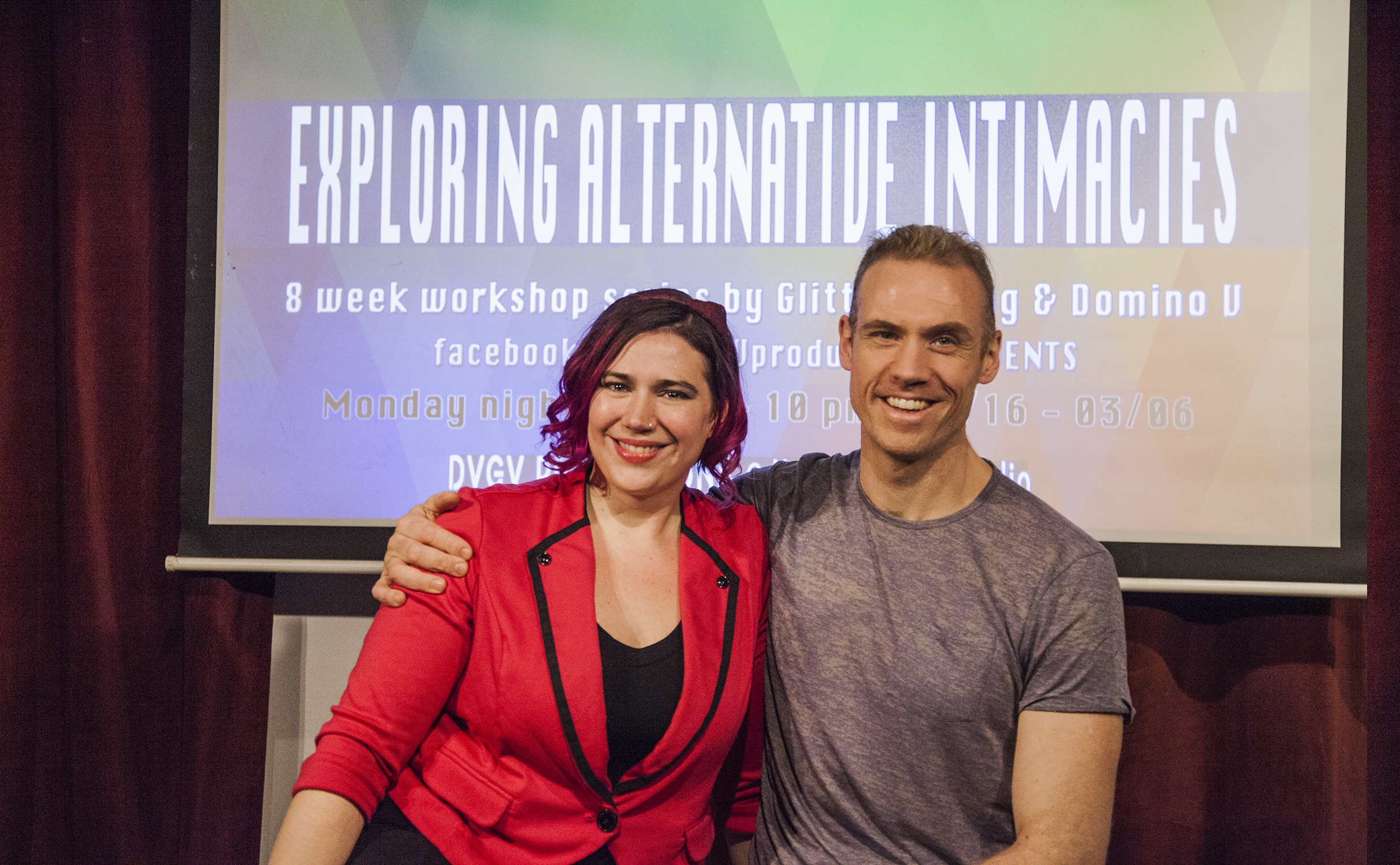 Our eye contact has taken on a whole new level of meaning. I try to listen to her with my eyes more, my hands more. We do physical therapy every day in a pool by her mom’s house. Parents are close to their kids, but we are particularly bonded. Nonverbal communication has taken on a huge role in my life. I feel particularly qualified to find ways to communicate to her that don’t put any pressure on her disabilities.”

Nonverbal is, if not more so, just as important as verbal though, especially in how the two prepare for each workshop.

The hosts make it abundantly clear that consent is no f*cking joke. At the beginning of the each class, the instructors will begin with a 15 minute consent conversation, reminding everyone that they aren't to touch another person without an enthusiastic "yes!"

This also extends to negotiating continual consent, for example, if you asked someone if you could massage their shoulder, and they agreed, you would have to ask again to move anywhere else on their body. It's really not that hard, guys, we swear (and if you think it might be, chances are, this ain’t your scene).

“It’s an opportunity to engage in a way—to experience touch, in particular,” Glitter Viking explained. “The idea was more centered around my area of expertise, massage therapy. It’s for people to connect through touch in a way that’s completely platonic. Touch allows people to see the humanity in each other. It’s inherently reciprocal and we start to see each other differently when we can touch each other with no ulterior motives.” 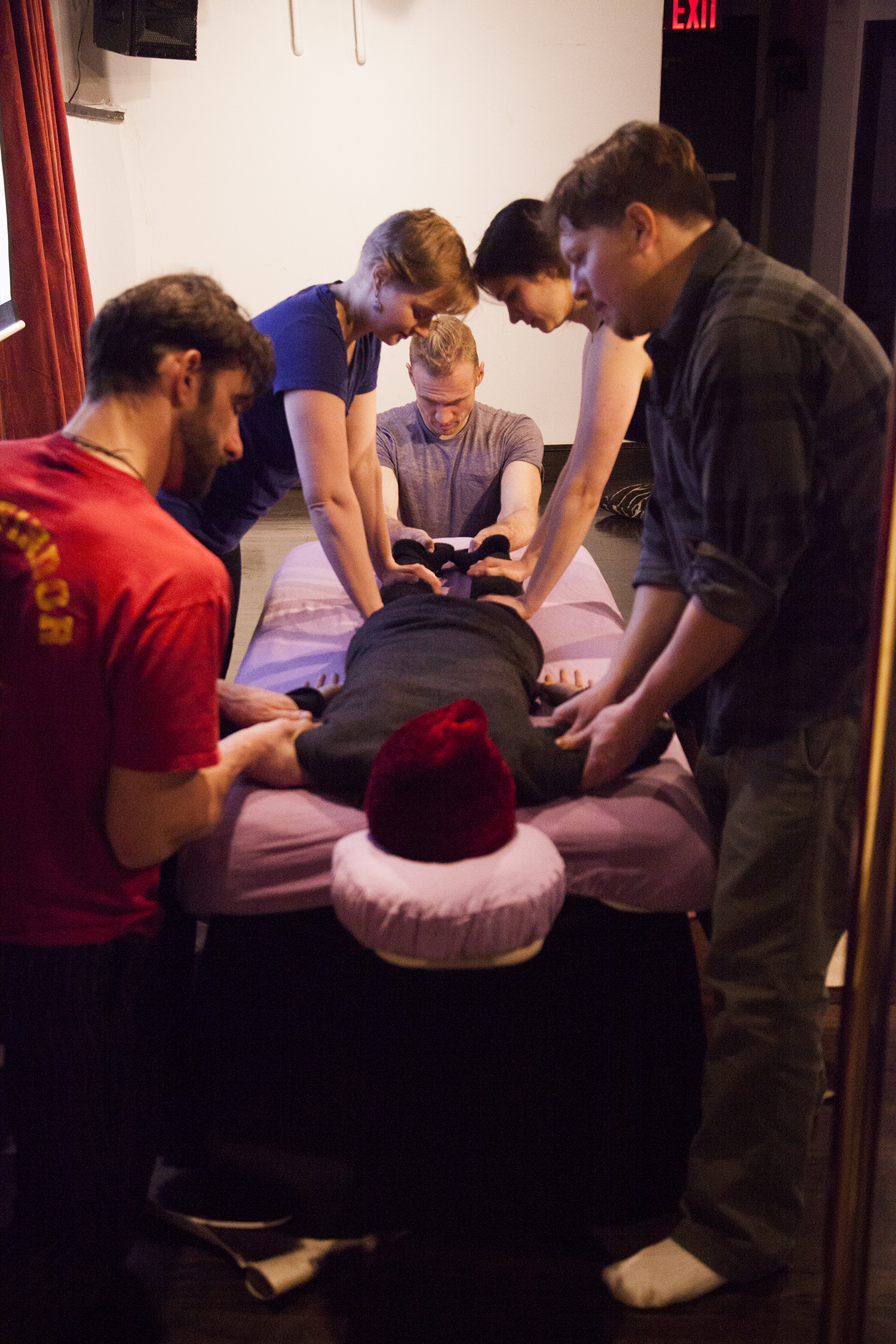 The important thing to know about the Hacienda Villa Studio, a sex positive intentional community, is that sex positive doesn't necessarily indicate non-monogamy, or where your mind instinctively wander.

DVGV Productions is also committed to eliminating the pressure, shame, and bias often associated with sexuality while presenting ways that platonic physical interaction can occur between people devoid of sexual overtones.

The workshops will be held at Hacienda Villa Studio, a recently renovated studio in a sex positive intentional community in Bushwick.

“Sex positive community doesn’t mean everyone identifies as non-monogamous,” Domino V told us, and that’s an important distinction to make considering much of what New Yorkers may have heard about the sex positive community in recent exposé articles borders on voyeuristic and crass depictions of play parties ignoring much about the actual relationships comprising the community.

“The main aspect of this community is inclusion. The environment we’ve created is unlike any other because we maintain a friendly space for people to experiment with all sorts of relationship styles, and feel free to display their identities. There are many different types of expressions here,” Domino V told us.

“The most important thing to us is allowing everyone to be part of the conversation, hearing what everyone has to say.

“Even if they’re coming to talk about what they don’t like—the shame that comes with sexuality,” Glitter Viking added.

“Our intention as a community is to have a positive outlook on human sexuality and to encourage people to embrace what they feel and to move towards as just a sense of their own personal liberation. We understand that everyone is going to do it differently to a degree. At our core, we’re responsible hedonists.”

Interested? Of course you are! Check out the full schedule of Exploring Alternative Intimacy workshops here and snag tickets to the next volume, Sound Healing with Andriana Santiago here. The Bushwick venue address will be emailed upon ticket purchase. Tickets for each workshop are $15 available only in advance. Space is limited to under 30 participants per workshop.