FML: (Almost) Everything You Need to Know About the Struggles of an NYC Internship

These are the best days of your life, kid. You graduated high school. You got a summer job that you maintained all throughout undergrad, and now you're looking for an internship well-suited to your major (hopefully).

Or, maybe you did that already, and you held down a job (or two, or three), and still, to everyone's amazement, you graduated. Congratulations! You have a degree, and you're well on your way... to another internship. But it's okay.

Welcome to the real world. Your life is still right where rest it's supposed to be.

You're young. The world is your oyster, and you're shuckin' that sh*t like a champ. This is going to be the last internship you'll ever need until you get that real-life, adulty job you always dreamed of.

Your resumé's going to look so mothereffing great afterwards, you'll hardly even need to apply to jobs, right? They'll come crawling to you. You'll use all these cool words and phrases like "counter-offer," "incentives," and "intuitive" (who knows why you're using this word in particular, but you will eventually).

Nope. Not really. Not always. Rarely. Maybe. If you're lucky.

But then again, who knows?

It's messy. It's full of chance and opportunity-- never really luck, though. It's long. It's difficult. It's stupid. It is what it is, and what it is is life. So, read on to commiserate with the struggles of an NYC internship, then, come check us out at the General Assembly HQ April 26th at 6:30 p.m. Best part? It's free.

For now, it's just the baby steps. Read on to commiserate with the struggles of the NYC internship. 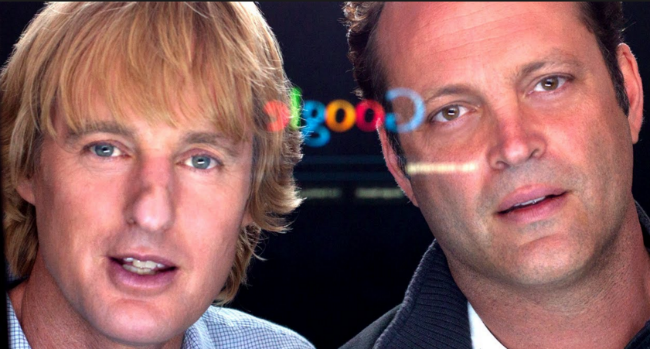 Kind of kidding, kind of not kidding.

If you're using a work of fiction as the model for a real-life decision, you're doing it wrong.

Moreover, if you're using a Vince Vaughn-Owen Wilson buddy comedy to inform anything you EVER do, grow up Count Chocula. You're even worse off.

This is really just a moment to say, "This movie is awful. If you've seen it, I feel your pain. If you haven't, please for the love of God don't."

Expectation: This internship will lead to a job.

Reality: It might lead to a couple more internships.

"Three months, travel stipend for each week, with the opportunity for a long-term position at the company." Don't die wondering what opportunity they meant, but there's a good chance it's not with them.

Legally, they're not allowed to promise employment, and entering any internship with the expectation that they will is a fool's game. You're not a fool. You have a degree. You're something more, right?

That's why you're applying the hell out of yourself. You're sitting like a sponge when spoken to-- f*ck that, you're taking notes, you're networking wherever you are (with DIY business cards your mom made you that read "Freelance Everything, Everywhere"), and you ask good questions.

You apply yourself because nothing in this world is promised, and even if that phrase is a horrific cliche your dad heard on a Tony Robbins tape back in 1997, at this point, it still resonates because too many people have forgotten: Wait. Nobody did promise me anything.

Expectation: "You won't be getting coffee!"

Reality: They never really laid out exactly what you're doing.

A lot of internship postings love to use this language, and that's fine. We do it too, but uh, better. That's a good way to start a conversation. It's an immediate reassurance that you won't be doing something menial or stupid; that they, on some level, value both you and the time you give them.

But if that's the whole conversation, then things might not end well. They said, "You won't be taking coffee orders." They didn't say, "Hey, person with the MFA in poetry! Don't worry, you won't be doing data entry."

Expectation: You're working for a company that knows what they're doing.

These companies might be the one who coined the phrase"You Won't Be Taking Coffee Orders."

But what they might not tell you immediately, and what every start-up should disclose to any prospective intern or employee, is that they have a better chance at failure than success. It's a fact. Nine out of ten start-ups will fail.

So, in your interviews, listen closely. Listen carefully. Listen for a plan.

And if you have any doubts, ask questions. Try to get to know them as much as they have you in the time they've allotted. If they can hold a lengthy conversation about what they're doing, chances are better that they might actually know what they're doing.

But this isn't always the case. It's painful discovering that where you are isn't what you thought it would be or even what you know it could be. It's an internship. Options are still on the table.

Expectation: You'll get compensated in the long run.

Reality: You leave knowing even less about life.

"We can't pay you right now, but we're giving you real-world experience."

If you're looking for a substantial stipend to get you through the day, you're probably screwed. Internships are never income replacement. That's okay. Internships during college are hard, and internships after college are just as bad if not worse.

The reality is that the stipend should never be the motivation. The promise of a job with that company shouldn't either. You might learn that they're not good at what they're doing. It happens. I've done it, and I've even been guilty of it. It's a learning process for everybody involved.

Again, internships are all about applying yourself. Cliché AF? Yes, please. But seriously. Ask questions. Get involved. If the task is menial, become an expert at it (quickly). Always find a way to insert yourself into needed situations.

What mom and dad never said about life during or after college is that failure is real world experience. They said failure is not an option not realizing that prospects are grim and that the world is chock full of disappointment.

Expectation: Anyone can afford to do it.

Reality: WTF are you talking about?

If you're lucky enough to stumble upon a solid, paid internship, cherish it. You're in the minority.

For the rest of you toiling through unpaid internships, we feel your pain. It's not a sustainable practice. How are you supposed to commit 20-30 hours a week to a job that's not paying you while living in/commuting to the most expensive city in the world?

There are few that can manage it. Some have very favorable circumstances, others manage the same way they did in college: working two other jobs and nearly dying through all of it.

The NYC internship game is a rough one. It takes few prisoners, and rewards even fewer.

It's expensive, and it's hard, and more often than not, it's thankless AF.

Check out 20 Little Things You'll Miss About NYC After Leaving It.