Every Fantastic Thing You Absolutely Must Do This August in NYC

We know that NYC summers are basically the worst, but there are an infinite amount of ways to keep cool and enjoy the blistering days. You can enjoy water parks, drink overpriced wine, and snack on some insanely weird/ trendy goodies to pass the time.

But does that all end when summer does?! Trick question. The answer is no; good times are a daily given in the world's best city, NYC.

And with the last official month of summer upon us, we've got some stellar ways you can celebrate everything that's amazing about summer in the city.

If you typically like to celebrate things with alcohol, food, and video games like we do, then DAMN we have some good ish coming your way.

It's only the beginning of August, but there are plenty of events happening every weekend until September hits, so get your fill while you can! Check out this stocked list as you drink, eat, play, and do everything else with the best friends, in the best city.

What screams summer louder than a water park?! Arguably nothing. For the first three Saturdays in August, the 5th, 12th, and 19th, roughly 7 miles of NYC streets will be open for the public to frolic freely, from 7 a.m. to 1 p.m. WILD, RIGHT?

And this year, Citi Summer Streets is adding a huge water slide to the event! That's right folks, a water slide IN Manhattan. Insanity at its finest, because this is NYC and that's just the norm. So gather your swim trunks and your flippy floppies and join at either Foley Square or Union Square for water fun, along with other stops along the path to celebrate summer in the city.

This Saturday's Saber Battle in Washington Square Park is boutta be LIT. Literally. From 8 p.m. to 11 p.m., you can join hundreds of fellow New Yorkers for an absolutely epic night of (safe) saber light fighting.

Hosted by Newmindspace, this event only costs $5 and reserves you a saber that lights up 6 different colors.You can pick it up at the event or have the saber shipped right to your house.THRILLING. 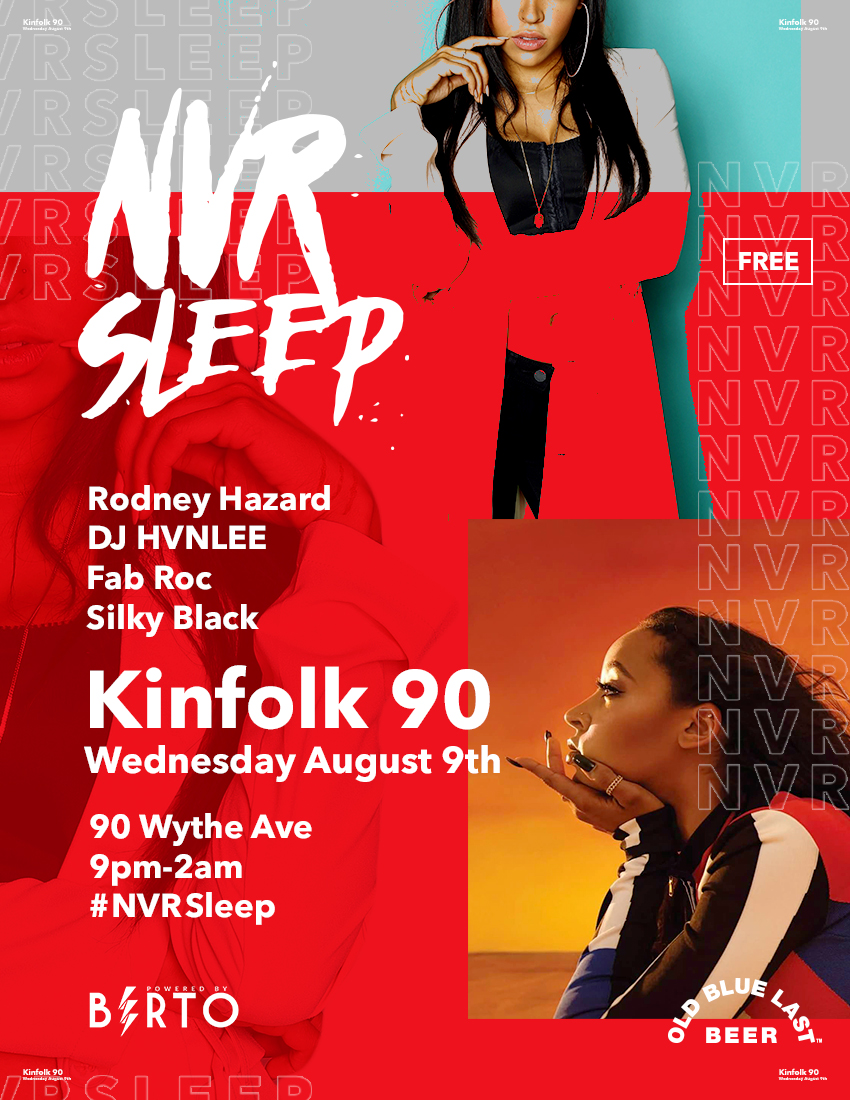 NVR Sleep is back y'all! Next Wednesday at Kinfolk 90 in Brooklyn, DJs will be playing caribana vibes all night long, setting the mood with some sick beats.

So if you're down to get down on a Wednesday night in BK, then we better see you at Kinfolk next week. Bring your friends or your bae or whoever, but def roll through.

This year's Daybreaker party in August will be Tuesday August 8th, from 6-9 a.m. at Pier 40! We told you about the party in July, and this one is going to be just as exciting with a "Bathrobes and PJs" themed boat party.

Tickets are a little over $30 for the party sans yoga, and a bit over $35 for the event with yoga. You'll also receive coffee, tea, and a light breakfast. Hope to see you there!

Who's ready to laugh?

We're hosting an amazing lineup of some seriously hilarious NYC comedians, including Calvin Cato, Gianmarco Soresi, Ashley Brooke Roberts, and Bredan Fitzgibbons. Oh, and APARNA NANCHERLA, who's f*cking amazing, and if you're not following her on Twitter, you are missing out.

Don't forget to snag yo' tix!

Saturday day party in Brooklyn? Count us in and then some. If you enjoy art and food and drinks, then you should probably check this event out at 1103 Fulton Street in Brooklyn, Saturday August 12th.

Tickets range from $25- $35, covering food and unlimited mimosas from 2- 5 p.m. Take sips and pics while you enjoy the beautiful art of the late Basquiat.

A quiet party might sound a bit weird, but this is NYC and nothing really makes sense half the time. If you're ready to take a break from the typical bar/party scene and try on something new, you need to check out this event coming up on Friday August 18th at Circle Line (Pier 83) at 10 p.m.

And the best part? Tickets range from $5 to $15 so you can quietly ball on a budget and be comfortable in casual clothing while doing so. This is going to be one of the best Friday night turn-ups of the summer!

Anime Con is coming back to NYC! The weekend of August 18th- 20th is going to be cosplay mania at the Marriott Marquee in Times Square, so if you're intrigued and want to check out this event, you should probably act soon.

You can register for tickets here, costing you about $60 for the three days, which is pretty amazing considering how much will be there. Music, panels, discussions, and around 10,000 attendees will establish this year's event as one for the books!

The world's largest LGBTQ Comic Con is coming back to NYC this summer at the Brooklyn Bridge Marriott! The weekend of Saturday August 19th and Sunday August 20th will be one filled with music, cosplay, and an exclusive 18+ "Camp Fire" party on Saturday night.

The even starts around noon Saturday and ends around 6 p.m.Sunday night. Bring your energy and support for the LGBTQ community; tickets available here!

Dessert Fest YAAAAS. This year's sweet celebration will be held at Dobbin St in Williamsburg. It'll be a weekend of deliciousness, but screw the guilt. Despite what ANYONE tells you, your summer body is your everyday body, and you can enjoy yummy food sans guilt. Just sayin'.

This weekend festival features over 20 vendors selling goodies from face cookies, to cakes in a jar, to ice cream sandwiches. If you haven't gotten your ticket yet, the only remaining ones are $50 for either day, including workshop packages. Check out ticket options here, and we hope to see you at the event!

Are you a die hard video gamer? If so, then you might be thrilled to check out this year's gaming convention held at Terminal 5 on August 19th and 20th from 10 a.m. to 6 p.m.

Play NYC is a weekend-long celebration of gamers and creators alike, ranging from all ages and gaming interests. Tickets are available here, with GA being $25 and Devs & Pros tickets at $75. There will be over 100 developers at this convention, so make sure you check it out!

This all African, African American, and Caribbean day party will be filled with music, food, dancing, and more, as event-goers celebrate all the beauty and greatness of the African Diaspora.

Held at Hudson Terrace on Saturday August 26th from 4 p.m. to 11 p.m., this event will be one you don't want to miss. Tickets range from about $12 for Early Bird tickets, all the way to $500 for the VIP table package, so you definitely have options to choose from. Get yours here!

Catch a day hanging with some of your best friends while you celebrate all the beauty of diversity in NYC. As The New York Times called it the "most multicultural festival in the U.S.," Afropunk is one festival that you don't want to miss.

This year the event will be held at Commodore Barry Park in Brooklyn, from 12 noon Saturday August 26th until 11 p.m. on Sunday the 27th. Get your tickets while they are still available, only GA for Saturday and Sunday are open for $55 each day. VIP for Sunday is your other, higher priced option, landing at $167.

This bar crawl will be one for old time's sake, reminiscing all the way back to the 90s where music videos meant something and Nickelodeon was actually cool. Coming to you in the East Village, GA for the event will start at 2 p.m. at Brother Jimmy's BBQ, as you make your way to different bars.

Pricing options are wide, giving you the option to purchase your tickets a bit cheaper before August 6th, but the cost after the 6th does increase a bit as the weeks pass, so check here for all the info! Hope to see you all there with special guest, Kel, from Kenan & Kel!