April Showerin' Us with Solid Gold: 12 Can't-Miss Events Going Down in NYC This April

We’re talking the start of our monthly spoiled soirées which, by the way, will be off the chain. We mean, we’ll be at them, so how could they not be?

Yeah, you're intrigued now, aren't you? You should be, because if you stick with us, you just might have the best April of your life.

There are art events and film festivals, food festivals and one specific festival with a lot of bacon and a lot of beer.

The point is this: New York City is an excellent place to be for April. Probably the best place in the world to be in April. Want to know how to make the best of it? Read on to find out. 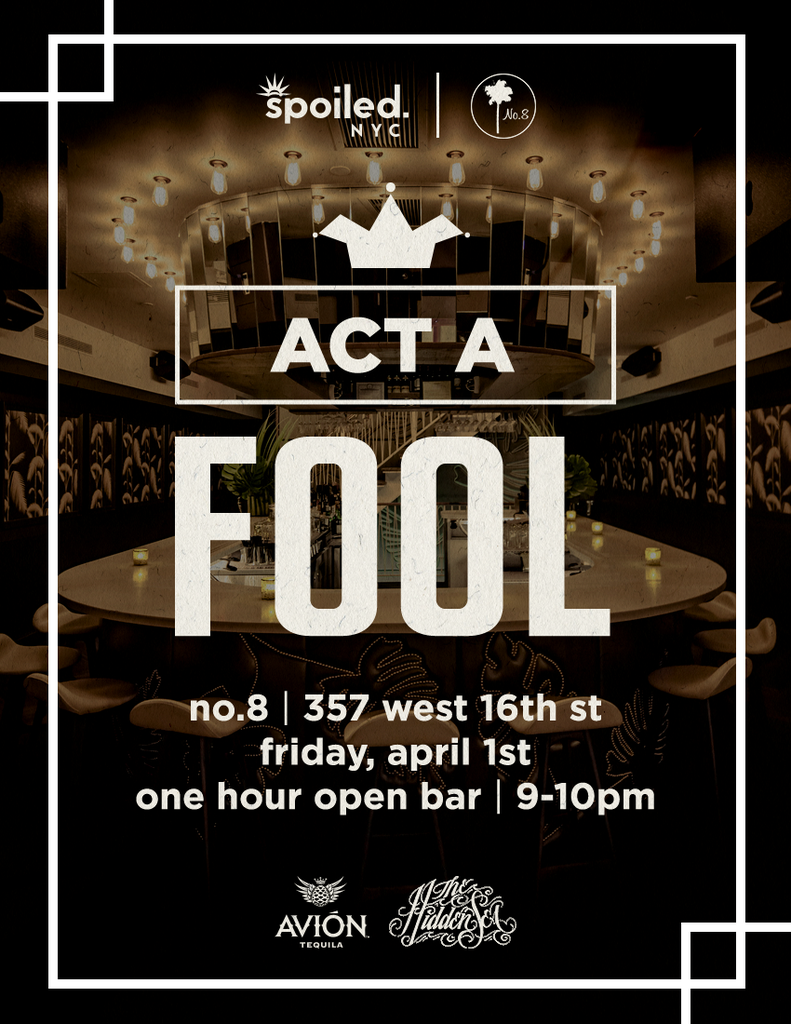 April Fool's: we're having a party. Just kidding. It's not a joke; it's for real. We're kicking off our monthly event series of spoiled soirées this Friday, April 1st, and we want you to be there.

It'll be on Friday, April 1st, from 9 p.m. until the sun comes up, at No.8, the hottest spot in NYC's nightlife. Don't go telling everyone that, though. We don't want the secret too widespread. We just want you and your pals.

No. 8 is the perfect recipe for an insane party. It's got delicious cocktails, and it radiates swankiness. Like we said, we're into it. We'll kick off the best month of the year with a one-hour open bar thanks to our good friends at Tequila Avión and The Hidden Sea Wines.

Want to kick it with us? Awesome. Get your tickets here.

You know that lovely springtime weather means you need to get to the New York Botanical Garden and check out their stunning annual Orchid Show.

The orchids are beautiful, the weather is on point, and looking at flowers makes you feel pretty good about the world. That's especially true when you live in NYC, with all the buildings and sidewalks we've got in the place of nature.

This year marks the 14th annual year of the Orchid Show, and touring it will transport you through history, through a stunning backdrop of thousands of orchids.

Did someone say the most romantic date in the world? Yeah, we thought so. Get your tickets here.

Living in this city is basically a constant sleepover with 8.3 million people. We might as well acknowledge that.

The best way to get up close and personal with all your city neighbors like pals at a sleepover? You guessed it: Pillow Fight NYC.

It’s going down in Washington Square Park on Saturday, April 2nd from 3 p.m. to 6 p.m. All you have to do to partake in the battle is show up and bring a pillow.

So, fun for an incredible cause anyone?

So do we. We especially like the food of the Lower East Side when its delicious cuisine and buzz-inducing alcohol is available to us in endless quantities.

We’ll tell you what’s going down at Taste of the Lower East Side. There will be unlimited tastings and open bars from up to 50 of the most acclaimed restaurants in NYC on April 6th from 6 p.m. to 10 p.m. at Metropolitan Pavilion.

Plus, the proceeds will connect 7,500 New Yorkers with Grand St. Settlement’s vital social services and programming.

Could it get any better? We thought not. Snag your tickets here.

If you responded yes to the above questions, you absolutely need to be at the Antiquarian Book Fair from April 7th through April 10th at the Park Avenue Armory.

There will be more than 200 American and international dealers exhibiting a vast selection of books, maps, and manuscripts. It's officially sanctioned by the Antiquarian Booksellers'' Association of America, so you know it's extremely legitimate.

If buying rare, treasured book sounds like a blast to you, you obviously need to be there. Learn more here.

Oh, hello Brooklyn. Are we surprised that the hottest folk event in the world will take place this April in Brooklyn?

Well, no, we're not at all surprised, and we definitely want to attend.

At the Brooklyn Folk Festival, there will be musicians jamming out in folk, blues, jug-band, string-band, bluegrass, Balkan, and Irish genres.

There will also be vocal and instrumental workshops, film screenings, and a banjo talking contest. All of which is to say: it's going to be incredible. It's all going down at St. Ann's Church from April 8th through April 10th, and you can get tickets right here.

The New York City BBQ Cookoff, from 12 p.m. to 4 p.m. on April 9th will be every bit incredible as it sounds.

Plus, it's all going down in Staten Island at Historic Richmond Town. Which means it's your perfect shot to ride that Staten Island Ferry. Incredible river views and incredible barbecued food?

Yes, Springtime really does taste good. Get your tickets here.

Who said New Yorkers were unfriendly?

Whoever said that obviously knows nothing, and they obviously also never heard about Good Deeds Day.

Good Deeds Day will take place in Herald Square on April 10th, and will include the gathering of 40 do-good organizations that could use your help.

If you attend, you'll get to write letters to elderly people in senior care centers, plant a tulip bulb in a local park, sit in on a Scholastic reading circle, and more.

Plus, there will be live music. So, we mean, we don't think we have to do any more convincing. Learn more here.

If you love art, you're in the right city to indulge that passion. Specifically, it'd be wise for you to get out to Artexpo New York to satisfy your artistic cravings.

Artexpo New York is often referred to as the world's largest fine art trade show, so it's not like it's a big deal or anything...

There will be new works by 400 exhibitors, there will be educational seminars, and there will be what we've all been waiting and hoping for: cocktail parties. This is all going down at Pier 94 from April 15th to April 17th.

Get your tickets here and get ready for some really great art.

Does this event need any more explanation? Because, we sort of feel like it doesn't.

If you really must know more about an event with the words bacon and beer in the title, well, we don't understand you, but we're here for you.

The Bacon and Beer Classic, otherwise known as the event of the century, will take place at Citi Field on April 22nd and April 23rd.

There will be DJ music, dancing, interactive games, and oh yeah, lots and lots of innovative bacon dishes and lots of delicious beers. We've said our piece. Get your tickets here.

Okay, we get it, some people love films more than others, but the main point is that movies are a pervasive aspect of our culture. So you're at least a little bit interested in this event, we know it.

This spring's NYC Independent Film Festival is going down from April 27th to May 1st, and will host screenings of more than 200 films. There will also be networking events, panels, seminars, and more.

The goal of the film festival is to educate young filmmakers through panels and seminars on a variety of topics. Plus, it might wind up being really fun. You into it? Great. Get tickets here.

Yup, NYC has done it again. Or, well, Disney's done it too, since they're sponsoring this event.

The event in question? It's called Street Games Day, and it's happening for the ninth year in a row on Saturday, April 30th from 11 a.m. to 3 p.m. to close out April.

It's happening at Thomas Jefferson Park in Harlem, and its aim is to teach the classic, low-tech games city dwellers played in the 60s and 70s to today's modernized NYC residents.

The games involved? Stickball, pogo sticks, street hockey, skateboarding clinics, hula hoops, and double dutch. It really couldn't sound more fun to us. You know this is something you want to be a part of. Learn more here.

Check out 19 Can't-Miss Concerts Going Down in NYC This April.