My leather couch was many things.

It was sturdy. It was steadfast—immovable, even. It was the great beast for which you had to compromise your own aesthetic sensibilities.

It was a design of ill-conceived notions and tenuous understandings of comfort, structure, and size; a purchase ill-made and forever regretted; a thorn, a splinter, a paper cut, the unholy gospel for exercises in futility.

And then I realized: this is more easily broken than moved.

It was out of place in every apartment—and I'd moved it far more than I ever should have considered. It was bombastic and nonsensical. The Michael Bay of apartment furnishings, it was a living, breathing reminder of something that peaked in the 90s and was better left abandoned and ignored.

So, friends, family, neighbors who have endured the freakish howling from stairwells and doorways, let's pour one out for the leather couch. In its place, our new friend—a friend to all, if I might be so bold, Burrow.

Let us bury the past, or, if we cannot bury it, we must be brave enough to leave it scattered to bits on the sidewalk. 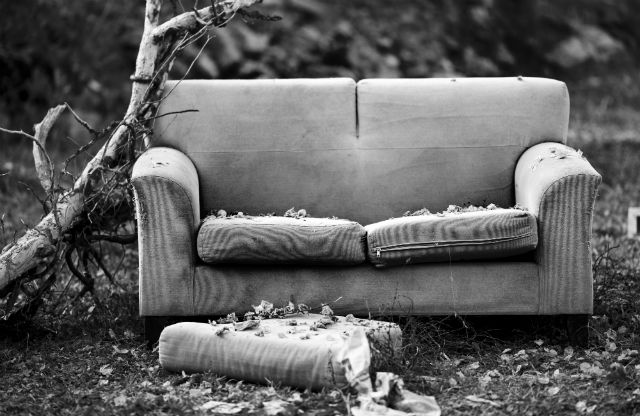 Yes, in its last moments, I thought it wasn't beyond saving. It was the last move—or, you know, until next year probably.

And then I realized: this is more easily broken than moved. Can I tell you that it was an accident?

Can I tell you that I didn't mean to chop the wood in the chair up? That I didn't go out, get the axe sharpened, come back, and hack away at its frame in delight?

So, leather couch, dearly departed, what can I say?

Thanks for the memories? Thanks for sticking to my arms and legs in the summer? Thanks for keeping me and every person who's ever visited wildly uncomfortable?

Thanks, then. Maybe I should have given thanks. Maybe a prayer. Maybe condolences. Maybe just a tribute of some kind. 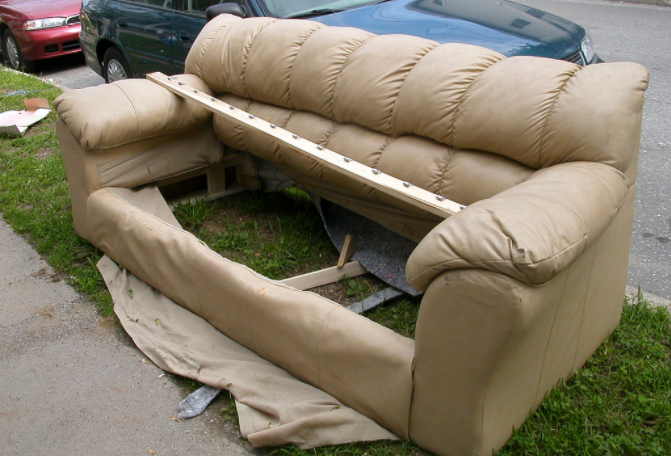 Hell, maybe I should have left you there. In memoria. In perpetuity. In the stairwell until someone came and got you. Who would have known it was mine?

It could have sat like a stone, waiting for adoration and rose wreaths. I could have visited it like I was some kind of mourner. Could have given it carnations, a send off with bagpipes, maybe I could have worn a veil.

But no. I'd already met Burrow. Burrow was low-maintenance.

Forgive me, I don't mean to speak ill of the dead, but did I have to squeeze through the gangly crowds of crying children and obnoxious hipsters who think it's funny to pretend something's horribly wrong with their staged appliances, like, "OMG BRECKY! WHAT'S WRONG WITH MY FAUCET?!" just to buy a couch? 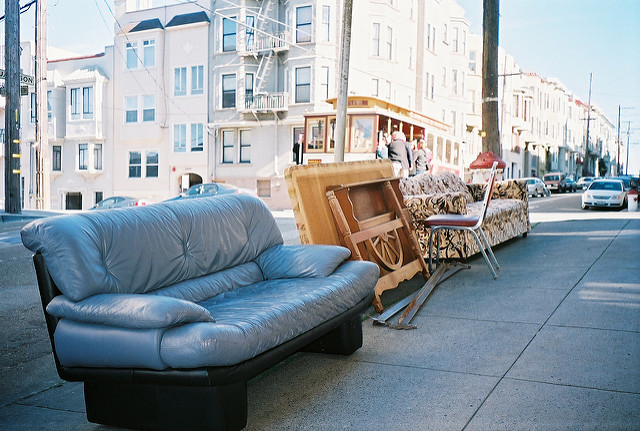 No. No, I did not. Instead, Burrow came delivered to my door. In boxes. Boxes from which I could assemble this new couch in minutes.

Did I have to trot behind those newly engaged couples putting together their dream registry at Restoration Hardware or West Elm that give pause to the couches because, "Honey, it's not worth it. Nobody's going to get us a $2,500 couch."

Burrow was neither a cheap piece of garbage that would take me hours to put together, nor a wildly expensive headache that would take months to get delivered without any sensible way to decide if I'd made the right choice.

But—God, just look at me. I told myself—I swore I wouldn't do this.

Let us leave what has fallen wherever it has. Whether that's on the curb collecting dust, rodents, and plagues unknown, tucked behind a dumpster, or simply scattered in the oblivion we've broken it into, let us leave it.