Fed Up With Trump? This Site Lets You Blast a Trumpet Right in His Face!

If you ask us, Donald Trump is pretty lame. We're kind of bummed that New York City is continuously associated with him.

What we mean is, it's definitely not a good look for the most culturally diverse city in the world to be tied up with a decidedly racist presidential candidate.

Still, there is a way for us to vent our frustrations... a very, very satisfying way.

The Swedish advertising agency Animal created a brilliant site: TrumpDonald.org. The site lets you, as you may have guessed, blow a trumpet in Donald Trump's face.

Annoyed about Donald Trump's sexist comments toward Megyn Kelly? Blow a trumpet in his face! Pissed off about his Islamaphobic, homophobic, and anti-Mexican comments?

Sound that trumpet off in his face, and watch his combover whip in the breeze.

Another delightful aspect of this site is that it keeps track of the trumps. At this moment, there have been more than 44 million trumps, and that number is only rising.

Blow the trumpet enough times, and a satisfying explosion of confetti will erupt in Trump's face.

We're not sure how they did it, it's one of those entirely unexplainable miracle things of beauty, like magic or unicorns (see: computer stuff). Trump's beady little eyes follow that trumpet around the screen like he truly is terrified of it sounding in his face. 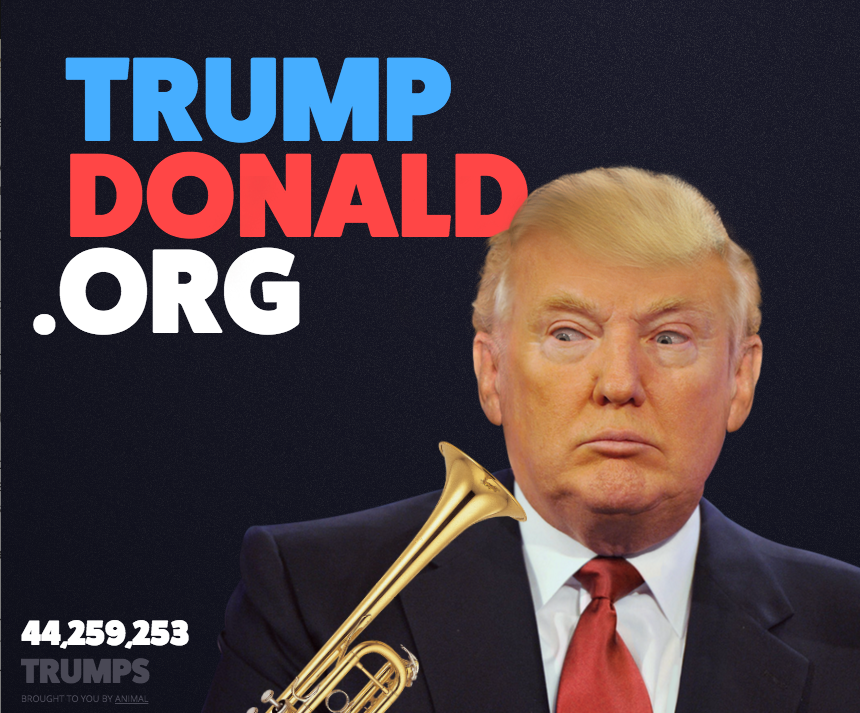 So yeah, we'd like to thank Animal for providing us with the perfect platform to vent our political frustrations.

As for Trumps presidential candidacy? While we do appreciate the fertile ground for comedy, the whole thing is also pretty scary. We're mostly excited for the primaries to be over so we don't have to hear Trump's ridiculous, insecure ravings anymore.

Check out That Awful Super Bowl Commercial That Used 9/11 Imagery to Promote… Tourism.