You guys know the time-old conundrum. You walk past a homeless person on the street, and your conscience gets the best of you. You start thinking, hmm, being homeless would suck, and you open your wallet to give that person money.

However, when you open your wallet, you're reminded of a harsh reality: you've been protesting ATM fees by never having any cash. So, you can't give the homeless person any money.

Well, according to The Daily Mail, there's a homeless person in Detroit who's conquered the no cash problem. The guy is nicknamed "Honest Abe" and he accepts credit card payments.

That's right, "Honest Abe" Hagenston has caught up to modern financial reality, and knows that no one who'd want to donate any money toward his survival probably wouldn't have cash.

So he's connected a credit card reader to his smartphone.

Hagenston says he came up with the idea when he was trying to save up money for new prescription glasses.

Hagenston's been on the street for seven years, and lives underneath the 8 Mile overpass where it crosses Interstate 75 in Detroit.

Hagenston said he'd usually spend the winter months shoveling snow to make extra money, but since there was hardly any snow this year so far (besides, obviously, Superstorm Jonas) he's been left with no way to acquire funds.

As a result, Hagenston said that he and several other homeless people have banded together "like a union," and take turns panhandling throughout the city. They split the money they make between themselves. 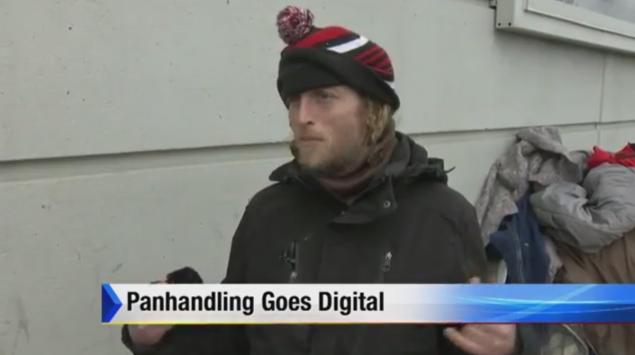 Our main question is, obviously, how long will it be until NYC's homeless are as tech savvy as Honest Abe?

The smallest credit card readers, like the one Abe has, are free to acquire with Square, though they charge a $2.75 fee on each transaction.

The owner of the reader is paid by direct deposit into a bank account a day after the transaction is made.

"I take VISA, MasterCard, American Express. I'm the only homeless guy in America who can take a credit card. It's all done safely and securely through Square.com," Hagenston said.

Check out: Cuomo to Help Get Homeless off NYC Streets During Severe Cold Weather.

[via The Daily Mail]