Get Your Raincoat! This NYC Restaurant Is Raining Down Golden Shower Burgers Inspired by Our PEE-OTUS

We have no shame in poking some fun at the state of our own PEOTUS.

Especially in creative expression with food. Community Restaurant in Bethesda, Maryland, has outdone us for today however, by finding a way to turn disturbing rumors about president-elect Donald Trump into a marketable menu item.

According to DCist, the burger was a spur-of-the-moment collaboration between owner Mark Bucher and local food writer Nevin Martell.

The two were meeting for business unrelated to Trump, Martell says, when the conversation drifted to yesterday's topic of Russia's potential blackmail attempt on the president-elect, including unverified claims of Trump's history with golden showers in Moscow.

That sparked the two to riff on a burger that would both mock the insanity of the situation as well as support a cause they both believed in, which is Planned Parenthood.

The resulting patty is topped with yellow cheddar cheese, a heavy slathering of yellow mustard, and a tiny pickle.

Okay, we snorted at the pickle because we couldn’t help it.

"We decided to pile on as many yellowish components as we could," Martell says, adding that the entire process from brainstorming to cooking unfolded within an hour. "The hardest part was finding a very small pickle on short notice."

The $20 combo also includes a side of golden fries and a lemon-glazed doughnut "happy ending." 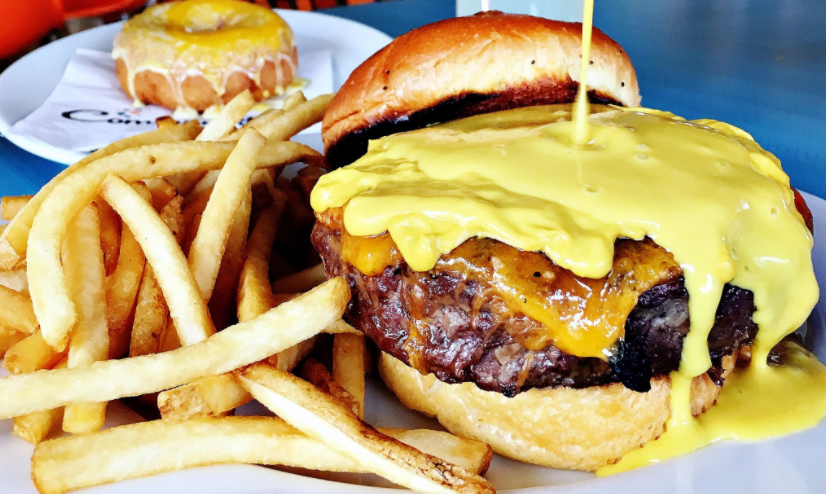 Kudos to whomever didn’t cringe at that implication.

As of now, the special is available today only by special request, and $5 from each sale is being donated to Planned Parenthood.