Happy Graduation, Kids! College Grads Will Spend More Than 75% of Their Income on Rent in NYC?!

There exists a cute recommendation from financial experts saying that we should not be spending more than 30% of our income on rent.

It sounds reasonable, right? That leaves a nice little chunk leftover for things like food, clothing, and (GASP), even the occasional fun outing.

However, in practice, this is wildly unrealistic for New Yorkers, especially recent graduates.

Sigh... By this point, we're pretty much used to getting the short end of the stick.

But it doesn't make reality hurt any less, and the truth of the matter is, the 1.85 million students who are graduating across the U.S. this year can look forward to dedicating a hefty chunk of their paychecks towards living arrangements.

According to a study by apartment rental app RadPad, students who earn a post-graduate median salary of $47,000 per year would have to shell out as much as 77% of their income to afford a one bedroom apartment in New York City at $3,000 per month.

The only city to surpass NYC in this awfulness is San Francisco, where the percentage rises to 79%.

You can check out the rest of RadPad's findings on the map below. The cities that are the most desirable in terms of rent vs salary are Austin, Atlanta, and Houston.

It's not all bad news for New Yorkers, though.

Although NYC's renting costs are at all all-time high, job postings are also increasing, especially in management consulting, digital marketing, and hotels and hospitality. There's also the perk of having New York pay off your loans for two years.

It's all about that silver lining, right? 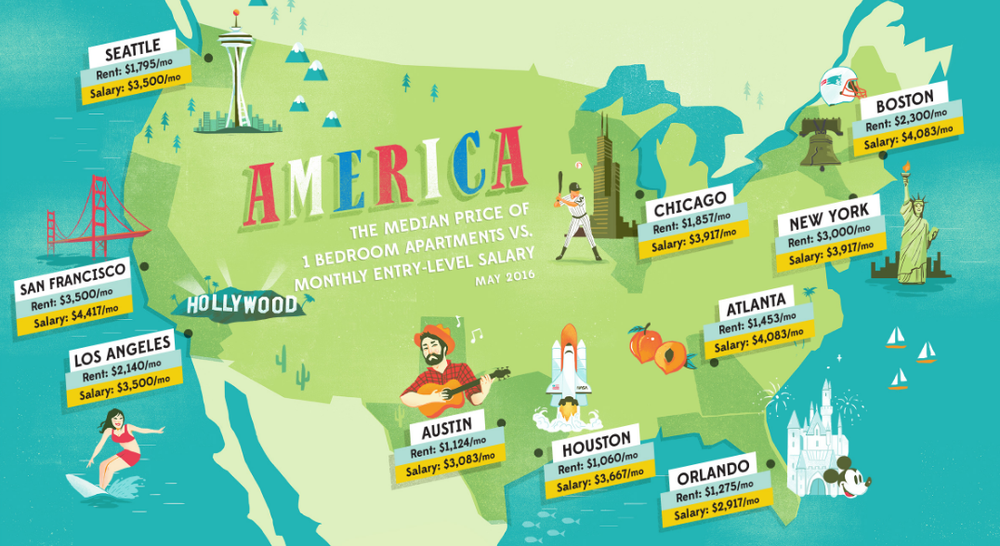