Cleaning - and Escaping - Out The Closet 🚪🤫👬 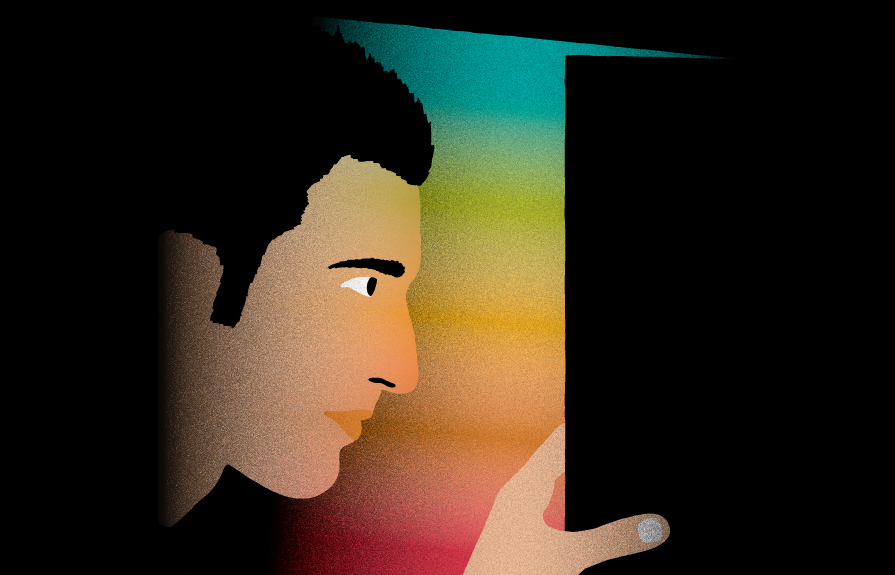 Ever thought about the word “closet?”

Like, parsed out in a literal sense? Quite simplistically, it’s an amalgamation of “close it.”

As in “Put that away! Shut it off! We don’t wanna hear about it!”

The phrase “in the closet” is often used to describe those who are masking something. Or, minimally, keeping their truth hidden from the light.

People put themselves in a literal box, lock the door, and toss away the key, with harsh emotional and physical marginalization resulting from this the captivity.

No one is allowed to see the “real” you, or at least the full version of it. Outsiders are kept at a safe distance, only permitted to glance at the visage of your exterior, but denied substantial entrance. It’s like playing a life-long version of just-the-tip, except with your family and friends.

To draw a fittingly dainty parallel, closeted people become their own skeleton; they create a figurative dungeon for themselves, separated from the castle by a rapidly fraying bridge. And, with no Prince Charming to save the captive Princess, she’s left abandoned to self-suckle on her teets of solitude and despair.

Which, by the by, is what I’d like it to say on my tombstone.

But let’s go even further with the imagery. If you scream inside a closet, no one can hear you. There are no windows, no light, and, quite frankly, a short supply of oxygen.

You’re left alone in the dark, condemned to suffocate in your own vacuum of hell, and without anyone to mop up your mess.

PS. Am I not nailing it with the closet imagery?

I liken the situation to a sort of self-imposed version of Stockholm Syndrome, wherein you are your own captor. There’s no one keeping you there but yourself, and yet it’s impossible to leave. There’s no code, no safe word.

Not even an impending rescue mission starring Brie Larson.

So -- how does one go about plotting an escape from themselves? Well, now that’s a tricky one. And I say this from experience, as I myself was “in the closet” once. Which, being a 6’3 male who bears more than a passing resemblance to Lurch from The Addams Family, was no small feat.

I’m not sure I can put into words what finally gave me the courage to break free. I was, like everyone else, terrified. Terrified of losing everyone and everything I ever loved, or cared about.

And yet, as more and more life passed me by, I realized I couldn’t stay in that enclosed, dark space any longer.

I grew up and out of what was once my only comfort zone, intuitively knowing that there was no room left for me in there anymore. The baggage had accumulated from head to toe and there was simply too much clutter.

Suffice to say, it certainly wasn’t a walk-in closet.

And so I escaped. I put on my bravest face and revealed it to the world, no longer paralyzed by the panic of my reality.

“I’m gay!” I screamed. And by screamed I mean whispered, one by one to each person in my life as I built up the confidence and trust to keep going.

And, no, I’m not gonna pretend I’m some enlightened, fearless warrior dancing in the rainbow-tinted sunlight of my own making.I mean, I do dance a lot. But mostly indoors.

I do still feel a slight tinge of lingering self-hatred when I write “I’m gay.” To be perfectly honest, I still have trouble saying it out loud.

But, more than anything else, it’s been liberating. I feel like I know myself and the people around me better than I ever have, and it’s all the more reassuring knowing that it’s all rooted in 100% authenticity.

Plus, it’s a huge load off my shoulders. Can you imagine putting the weight of your entire closet on your back? For me, it was the equivalent of dead-lifting a Century 21.

So I write this not only in an effort to inspire others, but also to inspire myself. To stay out of the closet, proudly living my dreams. With the occasional nightmare, of course. This isn’t Pleasantville.

If you find yourself trapped in any kind of way - , get out. Crack open the door, get some fresh air, and see the sun.

Don’t just crack it open -- break that damn door off its effing hinges. Shatter it into a oblivion and never, ever return.

You will be grateful for it.