Who's Richer? You'll Never Guess Which City Has the Most Billionaires in the World

New York City was once home to the most billionaires in the world, but now, as though all of our fears of the Chinese overthrowing America have been confirmed, we are not.

According to the Hurun Global Rich List, the Chinese city of Beijing is the new "Billionaire Capital of the World," with 100 billionaires, having gained 32 billionaires in the last year.

NYC remains in a solid second, with 95 billionaires, an addition of four from 2015.

This report seems to be a bit of a surprise, considering that the Chinese economy has been consistently unstable due to a precarious stock market.

However, it seems as if the Chinese rich are only getting richer, in spite of the falling economic climate.

The Hurun Report, run by Rubert Hoogewerf (who's Chinese name is Hu Run), indicates the the Chinese Shenzhen Stock Exchange closed out the year with a 22% gain, though it was rather volatile for most of the year.

Hoogewerf attributes the massive accumulation of wealth to the fact that the struggling Chinese markets were inundated with new initial public offerings (IPOs) in the attempts to stabilize the economy.

Regardless of the market valuation, Beijing added 32 new billionaires over the past year, ensuring their position as the top dog. New York City only gained another 4 billionaires in the past year. Similarly, it seems as if our self-made billionaires are falling, where as China is ripe with rags to riches stories.

"We should today that at the super-wealth creation level, the Chinese are now leading. People will look at China the same way that people looked at Stanford or Silicon Valley in the 1990s," Hoogewerf told Time.

However, simply because NYC no longer holds the spot as the home of the most billionaires in the world, we're still an exceptionally wealthy city, with 95 billionaires in our midst. Moscow takes the third spot with 66 billionaires, with Hong Kong right behind with 64. 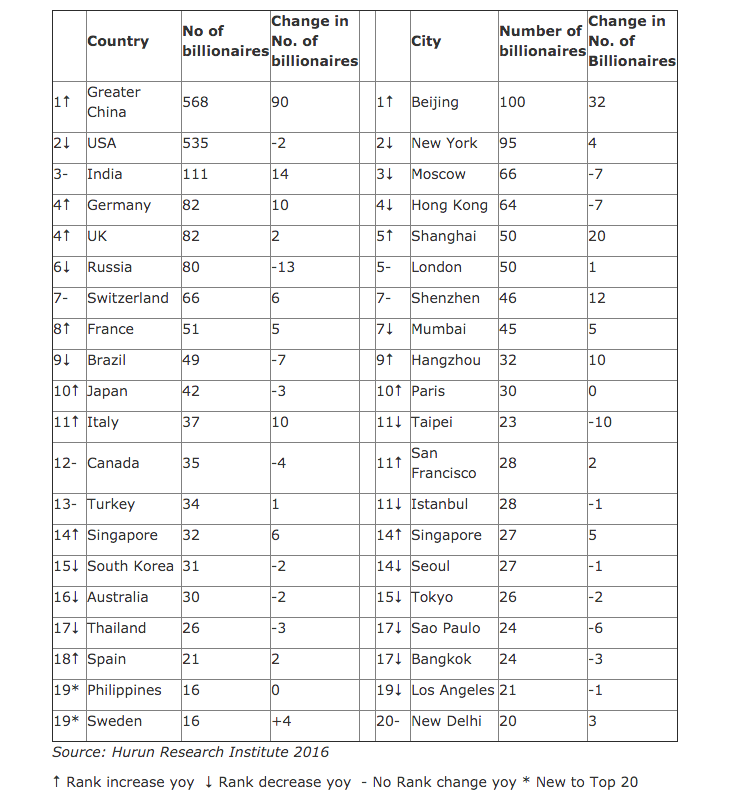 San Francisco and Los Angeles are the only other two cities in America to make the top 20 cities, with a respective 28 and 21 billionaires a piece.

As for the most wealthy people in the world, the USA takes 8 out of 11 spots, with Bill Gates coming in at a net worth of $80 billion.

Warren Buffet came in second with $68 billion. The others include Jeff Bezos of Amazon, Mark Zuckerberg of Facebook, Larry Ellison of Oracle, David Koch of Energy, Charles Koch of Energy, and Michael Bloomberg of Bloomberg.

Check out 8 Best Ways to Save Money in NYC When You Literally Can't Even RN.