Keep It in Your Pants: These Are the 10 Worst Cities to Have Casual Sex in the U.S.

Hey New York City, we have some terrible news for you. We're sorry we have to break it to you this way.

RentApplication used CDC data from 2013 to create an interactive map that reflects reports of syphilis, gonorrhea, and chlamydia throughout the United States.

Herpes isn't on the map, which is good, we guess, except that herpes is probably the STD you'd want the least (are we supposed to call them STI's these days?).

What's the bad news? Well, you've probably already beat us to it.

That sort of makes sense, though, doesn't it? Since we have the highest population of any city in the United States, it mathematically stands to reason we'd have more STDs than any other city.

The great news? When it came to total STDs per every 100,000, NYC wasn't even in the top ten. To be clear, we're not happy about anyone having STDs in any city. We're just glad that we can be, relatively, less worried about hooking up on the weekends.

Great job wrapping it up, everyone. 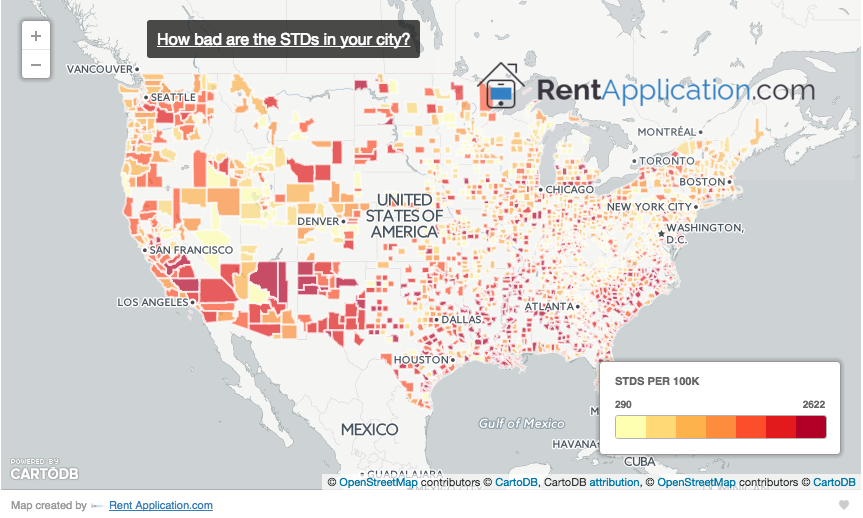 Manhattan ranked 66th for having most STDs per every 100,000 people. In Manhattan, there were 970.0511 reported cases of these STDs in 2013. This has nothing to do with the unreported cases, by the way.

When it comes to actual, total STDs, LA came in second, Chicago came in third, and Houston, Texas came in fourth.

Given that those are the cities with the second, third, and fourth highest populations in the United States, respectively, again, that makes mathematical sense.

All we can really say about this is, wear a condom, or make your partner wear a condom and if you're a lesbian, get tested before you hook up. Okay?

Check out This Video That Shows What New Yorkers Think About... F*ck Buddies.