So... About That Chicken Sandwich You Wanted: Chick-Fil-A Is Still Closed

So, we might have been a little more misleadingly hopeful than we would have liked earlier today when we mentioned that Chick-Fil-A would reopen today after closing due to a surprise Christmas Eve inspection.

The result of which, we're somewhat sad to say, was a 59-point deduction.

While that's unimaginably gross (okay, so we can imagine), we're still kind of distraught over not having a tasty Chicken sandwich nearby.

After all, you crave Chick-Fil-A even more on Sundays when they're closed, and it definitely doesn't help when they're still closed the next day.

While we don't yet know when the "Devil Chicken" will return from its unfortunate sabbatical, they did issue a press release on the entire situation which you can read below. 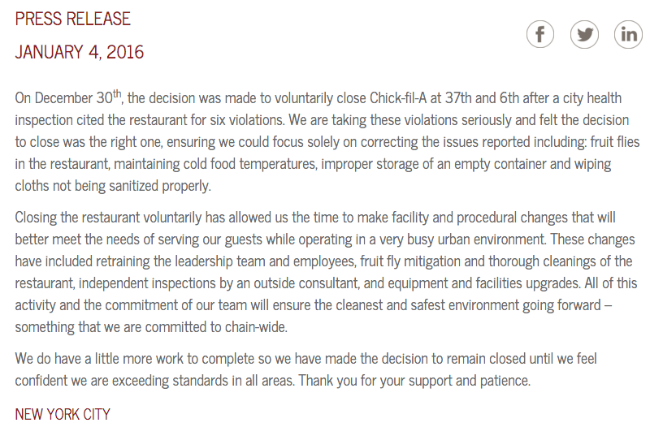 Welcome to New York, Chick-Fil-A. It ain't for everybody.

Check out 7 Best Restaurants to Nurse a Hangover in NYC.