This is the Fastest & Cheapest Way to Travel Across the Country

If you really want to travel across country as a New Year's resolution but don't have the wallet for it, we’ve got you covered.

For four days and $213, you can actually go from Emeryville California and end up in New York City if you’re on the right track. Get it?

Because you need to take the train, according to TimeOut NY’s report on the subject.

Travel blogger Derek Low mapped out the road trip going through 11 states and 4 time zones while visiting the Pacific Ocean and the Atlantic Ocean.

"Traveling by train gives you a glimpse into the soul of America," writes Low in his blog.

"The experience rewards you with far more stories and experiences and sights than you could ever witness alone in a car, eyes fixed to the road, or on a five-hour flight across the country."

The 3,3397-mile trip takes travelers through in a mere four days. Specifically, the first day of the adventure includes a 17-hour train ride from Emeryville to Salt Lake City.

On the second day, the blogger embarked on a 15-hour trip to Denver, which granted him mesmerizing views of the Book Cliffs, the Colorado River, and the Rockies.

On day three, Low took a 19-hour train ride to Chicago and, finally, on day four, he reached New York City from Chicago in about 20 hours. 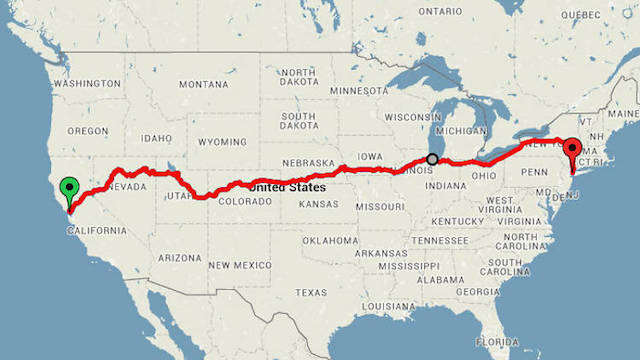 The only setback is that the train doesn’t stop in the visiting states, so it’s great for sightseeing. But you can still say you traveled throughout the country.