Laugh-Your-A$$-Off-Funny: Check Out These 2 Can't-Miss Comedy Shows in NYC

We all know that New York City is the cultural Mecca of the world. People come from all over the globe to see plays on Broadway, ballets at Lincoln Center, and operas at the Met.

But tourists and native New Yorkers alike might not be aware of all of the amazing, albeit smaller-scale, performances that happen here every single day.

These shows might not be lit up in bright lights on a Midtown marquee, but they're comprised of just as much talent as any Broadway show.

The comedy scene is the ultimate hidden gem - tickets are usually either super cheap or totally free, you won't have to elbow your way through crowds of tourists, and you'll be able to catch some of the best up and coming talent in NYC.

We've pulled two of those gems right here into a handy guide to get you started, so get ready to dive into the thriving comedy community that's been waiting for you in this very city the entire time.

The internet is a totally normal place full of only the most stable, articulate human beings. Right?

Uh, no. We're totally kidding. The world wide web has opened up the floodgates to weirdest, most outlandish, utterly absurd things we never imagined we would be subject to.

Allison Goldberg and Jen Jamula have decided to point the spotlight directly on that weirdness, and bring it to life in a show comprised entirely of things they've found on the internet.

Goldberg and Jamula conceived the idea because they "were captivated by the idea of putting internet material in a live performance setting and seeing how the foibles of our online behaviors and absurdity of our online identities would read."

To find content for the show, the pair pull obscure, dig-deep-to-uncover snippets from the internet, but they also rely on a great deal of viral content, a lot of which is submitted by audience members. (If you'd like to submit something, tweet the link to @Blog_ologues!)

The result is, unsurprisingly, complete and utter hilarity. Goldberg and Jamula go far beyond simply reciting their found material - their highly theatrical interpretations are so expertly executed that they often have difficulty convincing the audience that they did not write a single word of it.

This doesn't mean that their work is by any means unoriginal, however: "We do create are the characters and scenarios, so our imaginative stamp is on the words, for sure, which we do understand can be confusing. Our favorite explanation of our process is this: imagine you’ve been given a script without any indication of setting, character, or stage directions. What would you create? We love to make unexpected choices with the text," Goldberg and Jamula explain.

Our personal favorite portion of the show is one that Goldberg and Jamula call the "Poopera."

It was derived from one woman's tweets in which she recalls a time in which she went #2 at a guy's apartment, but it would not flush, so she was forced to wrap her business up in toilet paper and hide it in her purse for the remainder of the evening.

The women of Blogologues re-imagine the tale as an opera, in which the drama is satirical but Goldberg's vocal skills are anything but.

You can check out the Blogologues website here to learn more about the show, and be sure to catch their upcoming performance at The People's Improv Theater on June 3rd. 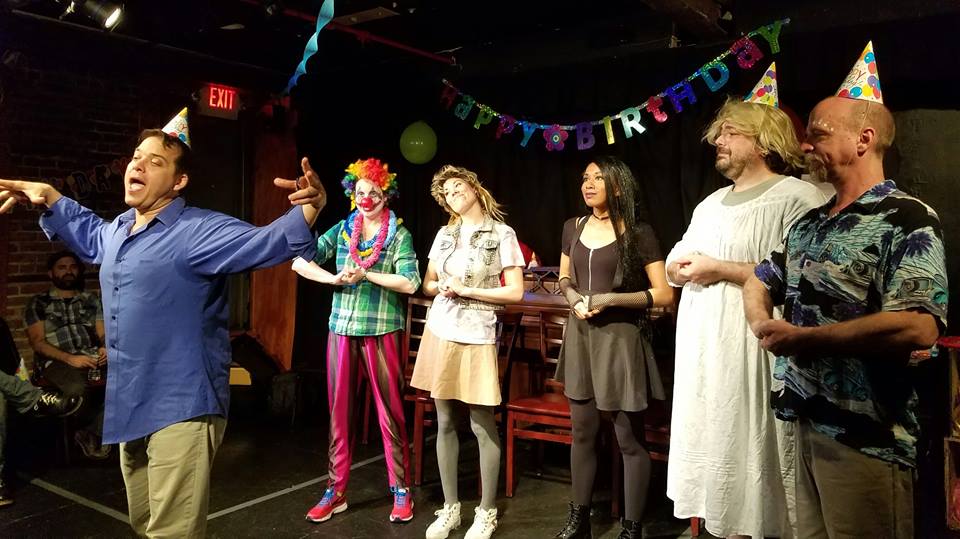 We all have at least one birthday from our childhoods that sticks out in our minds, whether for good or bad reason.

The newest production from IRTE (Improvisational Repertory Theatre Ensemble) rehashes all of the awkward, hilarious, unforgettable shenanigans that occur whenever families get together to celebrate.

The show, titled Happy Birthday, Stupid Kid!,  is just one of many original concepts produced by the company.

IRTE was founded by current artistic director Nanette Deasy, and features an ensemble of 5 core members who have been performing together since long before the organization's inception in 2011. This ensemble includes Deasy, as well as Robert Baumgardner, William Berg, Curt Dixon, and Jamie Maloney.

The group "aims to create improvised comedy shows that are highly theatrical, thematic, and character-driven", company member William Berg explains. Their performances are improvised, but the forms are highly structured, so as to be able to incorporate as many theatrical elements as possible.

It's for this reason why props and costume are a huge part of their productions. It is not uncommon to see fake blood, streamers, silly string, and other absurd objects sprinkled throughout an IRTE show. 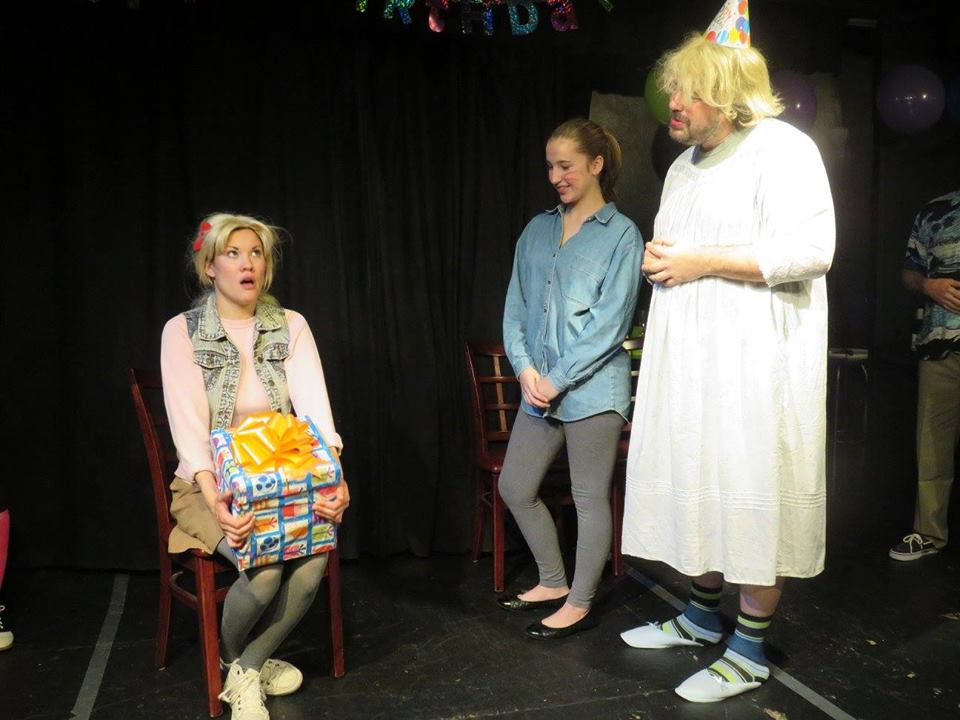 Their philosophy: the cheesier, the better. Berg says, "We love our cheap, dime-store props. It's the signature of the company."

It's clear that a lot of effort goes into the planning and implementation of IRTE's productions. Each season, the group cranks out 5 shows, all of which created from the minds of the ensemble members during their annual pitch sessions.

Once the shows are selected, the company invites guest players to join each cast, as well as musical guests, which rotate every performance.

Long-time friend of the company, David Johnston ("Mr. David Jay"), has been the musical guest for every show IRTE has ever done, in addition to the show they performed at last year's Dream Up festival.

Their current show, Happy Birthday, Stupid Kid!  is an original, improvised show, conceived by Nannette Deasy and directed by Robert Baumgardner. It's centered around 12-year-old Jamie McCluskey's birthday party, where the adults end up causing the majority of the raucous.

The cast of colorful characters, unique concept, and birthday cake that is distributed to each audience member (YAS), makes for an unforgettably entertaining evening.

You can catch the remaining two performances at The Producer's Club Theater on May 20th and 21st, and be sure to check out their website, Facebook, and Twitter for more information and updates.

Check out 8 Best Exhibits to Check Out at the Museum Mile Festival in NYC.