Only in NYC: Some Bozos in Brooklyn Tried to Airbnb an Igloo

Building igloos is the coolest. The only thing we could think of that's cooler than building igloos is spending the entire afternoon hanging out in one, getting a little too cold, and then heading inside to warm up with some hot chocolate.

However, some Brooklynites decided to take igloo real estate to the next level. You'd thought you'd seen the craziest in Airbnb drama? Well, as they say, you ain't seen nothin' yet.

Actually, we don't know if it was multiple Brooklynites, but we do know that someone in Greenpoint listed an igloo on Airbnb for $200 a night.

According to Brokelyn, it only took six hours for the listing to be removed. If we had to wax poetic about why it was removed, we'll guess that since igloos don't have doors, whoever rented the igloo couldn't protect against vagabonds.

Also, it's super cold in igloos, and you can't even bring a space heater in because the space heater will, well, melt the igloo.

It's true that bears spend several months a winter in similar contraptions, but we hate to bring up the obvious point that humans are, uh, not bears.

Also, we're sure the constructors of this igloo were the finest of architects, but there's always the risk of the igloo collapsing on whatever naive out-of-towners thought they were getting a bargain.

In addition to stellar architects, the masterminds behind the Airbnb post were also comedians. 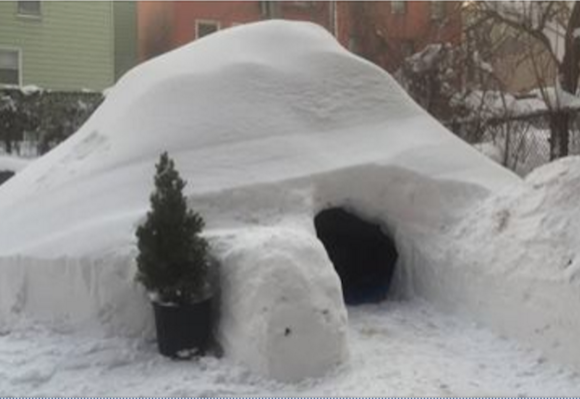 They also took care of flooring, spreading a blanket across the igloo's interior, and the lighting. The poked a small pinhole in the ceiling to bathe the whole thing in natural light.

Suffice it to say, we endorse Airbnb's decision to take the post down, and we also applaud the posters' humor. It's hard not to mock tourists' insatiable urge and willingness to spend money on everything authentically Brooklyn.

Check out This Interactive Plow Map of Which NYC Streets Have Been Plowed (and How Long Ago).