Brandon Scott Wolf's 11 Steps to Starting Your Own Religion

Many people in New York have big dreams of becoming famous movie stars, Academy-acclaimed Broadway performers, or the next Jay-Z / J-Lo.

Wolf is on a mission to inspire at least 100,000 Twitter users to follow him, thus supporting his status as a religious leader and convincing the government to provide him exemption from taxes. Additionally, Wolf is preaching his religion in the hope of forming a meaningful friendship with @TomCruise.

To naysayers and skeptics, Wolf assures he is not a cult leader—he just has a cult following.

Mashable said this undertaking “isn’t as wild as it might seem.” A contributor to NYC-based publication Bedford + Bowery said “I’ll pace myself before I call his bluff.” In an exclusive for spoiled NYC, Wolf’s own love interest said, “Just humor him.”

Wolf is a kind and benevolent religious leader, and has thus agreed to share his 11 tips to successfully starting one’s own religion. Just be sure to heed his warning: “If you want to start a religion, follow these step by step. Don’t deviate.” 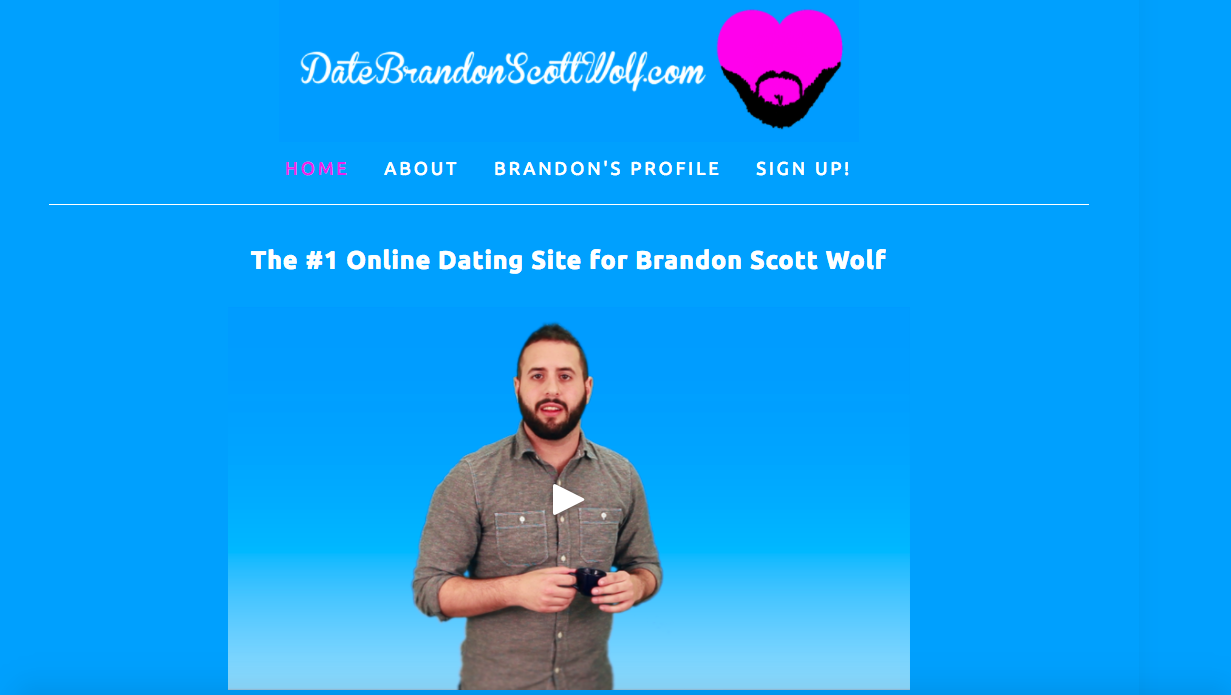 Wolf’s spiritual journey began in 2015 when he launched datebrandonscottwolf.com, which to this day is still the #1 Online Dating Site for Brandon Scott Wolf. He kept the message clear, a principle that has continued to guide him on his quest: “date me.”

Though the intention was simple enough—as a standup comedian, Wolf was seeking a reaction that would lead viewers to book him in a show—the website changed his life.

The viral success of datebrandonscottwolf.com landed Wolf interviews on Australian morning shows, articles in Japanese newspapers, and potential suitors from everywhere from Brazil to Ireland. 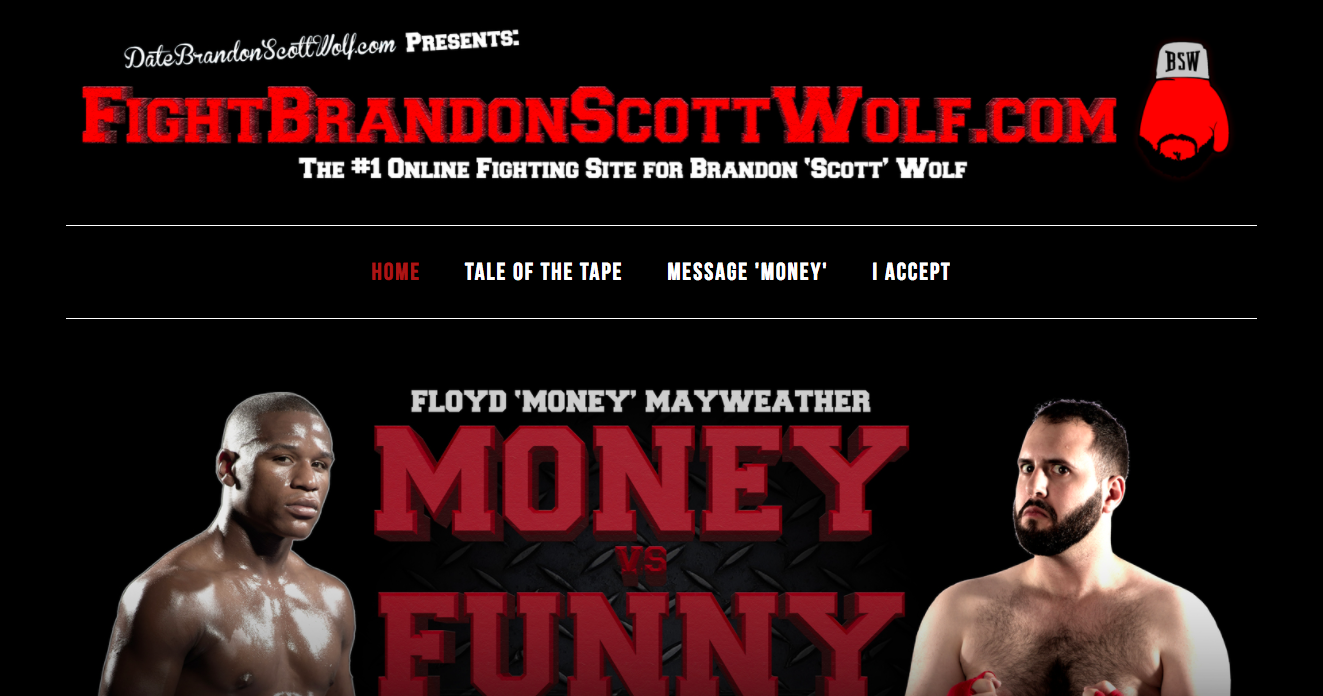 Though it didn’t do well in terms of dating (Wolf’s current love interest was landed via a less personalized website: Twitter.com), the website went above and beyond as a tool to spread the word that Brandon Scott Wolf is worthy of attention.

The next step was to use a similar method to appeal to a different group of people. Thus, fightbrandonscottwolf.com was born.

The second website got the likes of GQ and SB Nation talking. While it’s not confirmed that Floyd Mayweather himself has seen it (or can read it), it was a crucial step for Wolf in discovering his path.

“I need to do something with the ‘blank’ in front of my name,” he realized. Telling people what to do is a tenet of every religion. For Wolf, that call to action began to crystallize: he would tell people to “follow” him.

3. Continue To Perform Stand Up 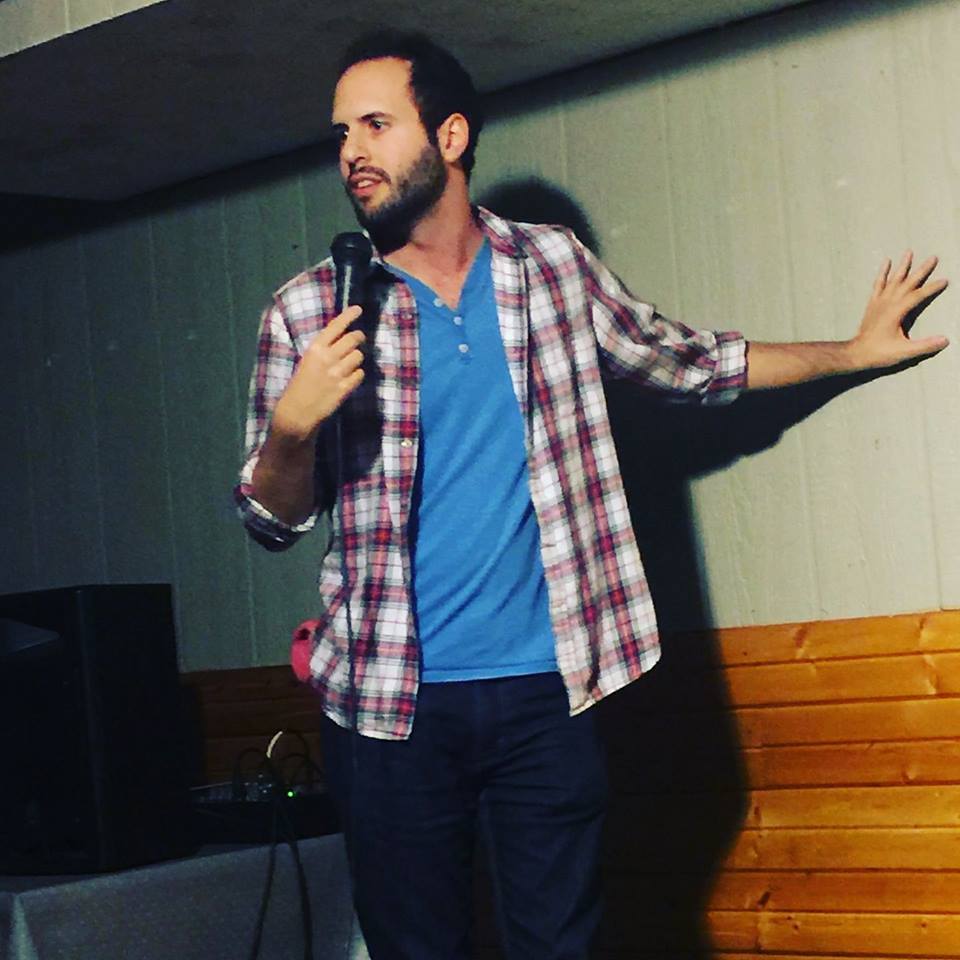 Fortunately (or perhaps by divine predetermination) for Wolf, his career as a standup comedian has been preparing him for his evolution into a deity for the past decade.

Performing standup put Wolf at ease in front of a crowd, speaking to the public, getting his view across, and—not to be underestimated—seeing who agrees with him. Finding those agreeing audience members is what began to grow the small fan base that would become early adopters of Wolf’s religion.

4. Realize That You Need A Bigger Social Media Following If You're Going To "Make It" As A Comedian And Prove Your Parents Wrong

Gods—they’re just like us. Wolf admits step 4 was a gradual realization, not an “a-ha”’ moment.

“You realize you need a following, people knocking down your door hungry for more. You ask yourself: how? Who has followers? Religion.”

Although his parents are very supportive, Wolf acknowledges that he gets tired of answering questions such as “When are you getting a 9-5 job? What are you doing for benefits?” He now has a foolproof answer: “Start your own religion. A lot of your problems will work themselves out.”

Wolf holds the Pope up as an example. The Pope has so many Twitter followers, he could personally @ message Comedy Central, and they’d give him a show. Followers are key to every religion, and Wolf’s is no exception.

5. Make Another Web Site: This Time About Starting Your Own Religion

Wolf emphasizes that step 5 is the most important. Make a website, say “this is my religion,” and you have one.

Wolf was personally inspired to spread his message right before the day that inspires dread deep in the souls of all Americans: Tax Day.

Though the inspiration was dark, the website Wolf made is anything but, and the message is very clear: follow Brandon Scott Wolf.

6. Tell Everyone About Your New Religion

The media has been integral in helping to spread Wolf’s gospel. Every time an article is published, shared, or retweeted, new followers trickle in.

For each new follower, Wolf personally reaches out via DM. Reactions have been overwhelmingly supportive, with very few detractors. Wolf’s congregation is growing.

“I’m really doing the Lord’s work...and by that I mean my own work.”

7. Spend A Night In Watching The CW's Riverdale

On the seventh day, Wolf rested.

8. Start To Slowly Believe In What You're Preaching

“The key to starting your own religion is to talk about it so much that it becomes the focal point of your life,” Wolf advises. “Do you think the Pope does anything besides Pope stuff?”

Step 8 is key in tricking yourself into thinking that what you’re doing is real. For Wolf, who doesn’t do anything besides comedy, it wasn’t hard to begin converting a comedy website into a real religion. Converting followers wasn’t far behind.

9. Actually Believe What You're Preaching

Wolf is clear that if you say something is, then it is as such. (If you say the sky is gray, it better be gray that day.)

Balance is crucial to leading a fulfilling life, even for religious leaders, and relaxation is important.

Though Wolf’s preference is Riverdale, he also extolls the virtues of 13 Reasons Why and Gilmore Girls. Upon expressing my own personal distaste towards the teenage suicide drama, Wolf shared insight into his semi-omniscient mind: “Nothing is going to be for everyone... except my religion.”

11. Achieve Oneness With The Universe And Also Apply For Tax Exemption

For Wolf, “oneness with the universe” is defined as thus: “When I’m at peace, life is good, and I’m making other’s lives better.”

It also includes hitting the goal of 100,000 followers and the ability to file with the government as a religion, granting him tax exempt status.

What does it grant followers of Brandon Scott Wolf? “One-liners, punchline jokes, and a glimpse into life of self-proclaimed demi-god, all in under 140 characters.” Keeping in line with his reverence for clear cut messages, there is only one commandment: “thou shalt like AND retweet.”

Wolf didn’t ask to be a leader, he’s asking you to be a follower. So follow Brandon Scott Wolf today. Amen.