If it seems like New York City is the master of building lose-lose situations, you might be onto something.

If you dig a little deeper, you might also find that the de Blasio Administration has been at the forefront of nearly all of these innovations given under the pretense of improving city life. Again, you're not imagining things.

The latest in these paradoxical developments is Mayor de Blasio's plan to add 15 miles of protected bike lanes to NYC streets by the end of 2016.

WNYC also reported that de Blasio promised a total of 50 miles of physically protected bike lanes, but they were, for the first time ever, more concerned with quality than quantity.

According to Transportation Commissioner Polly Trottenberg, this seemingly inspired idea of quality was making sure of not only providing more room to roam, but to "make sure that those miles are in quality places where you’re making important connections."

Well, for people on bikes, yeah, maybe it does. But that's a slippery slope.

What these lanes don't account for is the trucks that make deliveries while sometimes parked in places ideal for these bike lanes.

Ken Thorpe, CEO and chairman of the NY Trucking and Delivery Association told WNYC in an email that, "Contrary to popular belief, most trucking companies spend a significant amount of time and money in the attempt to have their vehicles park legally and safely." Don't we all?

"If the DOT would spend the same amount of money, time, resources and infrastructure on providing parking for trucks, necessary to moving our economy as they do to bikes, we would have safer streets." There you go, Ken. You, too, are onto something.

Not only does this bike-friendly initiative not address that aspect of it, but it also ignores the slippery-sloping, unintended consequences of giving people on bikes more freedom without some kind of accountability.

If there are these vast stretches of protected bike lanes, it would stand to reason that this would dis-incentivize cyclists from using the other lanes, right? But what if they don't? 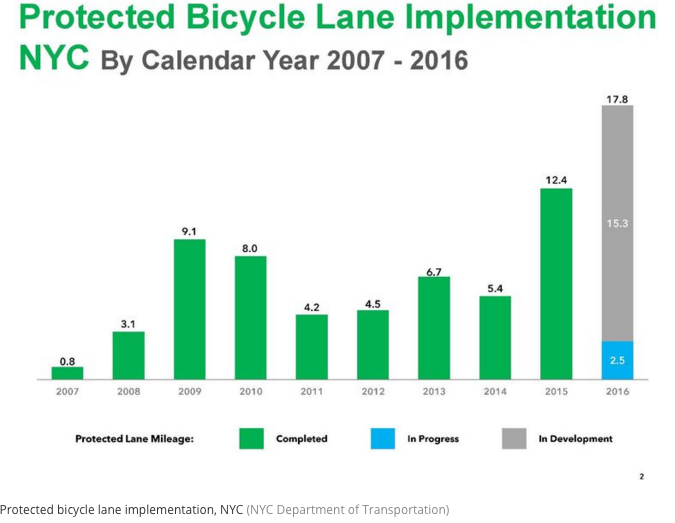 All this does is give people on bikes more access to the roads without addressing their flagrant refusal to follow other common traffic laws.

Oh, and what of the costs here, de Blasio?

Apparently, the average cost for these protected bike lanes is about $600,000 per lane-mile. 15 miles? That's upwards of $9 million, funds which, according to officials, are reimbursable by Federal funds.

Check out MTA Will Expand Wi-Fi Service for When They Fail to Get You Anywhere.