Did You Know Those 'Beats by Dre' Headphones You Got for Christmas Only Cost $17 to Make?

In New York City, we expect to overpay for everything almost.

That sandwich isn't worth $13. That Uber isn't worth nearly as much as it costs. Even the subway is overpriced and getting more expensive each and every year.

So is it any surprise that perhaps the most popular headphones in New York City are also massively overpriced?

Earlier this year, the tech blog Bolt dismantled a pair of Beats by Dre headphones to analyze the price of their components and the results are painful. How painful, you might be wondering? Well, those $200 headphones are made up of approximately $17 worth of parts.

Now it's been out in the open for quite some time that Beats by Dre does not make anywhere close to the nicest sounding headphones, so lots of people assumed they were paying for durability, or some type of overall quality of manufacturing.

But assumptions can be dangerous, especially when it comes to money. It turns out even the apparent substantive construction is a sham, bolstered by metal weights to make the set feel sturdier.

For the specific pair tested, 30% of their weight can be attributed to extraneous metal parts. Aside from that, most of the rest of them are plastic that can be either glued or snapped together.

Not to mention the ear cups aren't equally sturdily put together, with one side sporting two less screws than the other.

Now based on the researcher's best estimates, all of the parts shoddily assembled cost about $17. That's not including labor or shipping, but let's just say that Beats by Dre's profit margins can't possibly be thin.

In fact, it's likely with overseas manufacturing and bulk shipping, there couldn't be a cheaper way of producing these headphones. 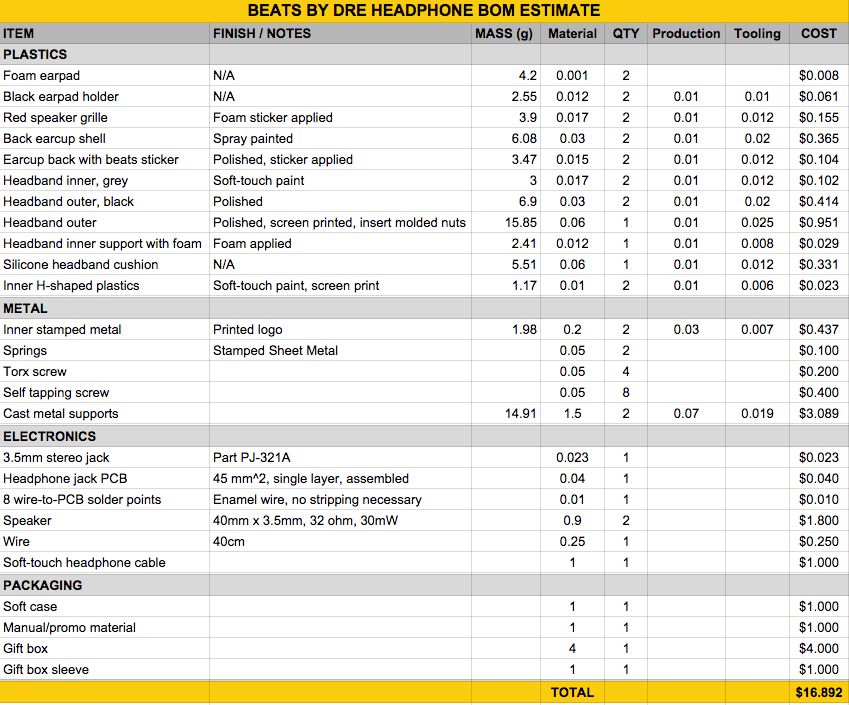 The moral of the story is, before you fall victim to artist-endorsed marketing around a product, be sure to do some research. There are much better headphones for $200-- and even less.

The catch is, they don't have the letter 'D' on them anywhere. So smarten up, New Yorkers.

Check out This Kendrick Lamar & Mario Kart Mash-Up Is All You Need to Finish 2015 Strong.