All Aboard the Drunk Train! The Metro North Might Be Bringing Back Bar Cars!

Anyone who's taken the Metro North anywhere can attest to its general sense of melancholy.

Unless you're a Westchester teenager on a Friday night, the commuter rails to and from Grand Central are a necessary evil, a daily purgatory if you will, that the commuters among us must face.

Up until 2014, riders of the New Haven line could take solace in the bar car, which served boozy beverages to assuage their commuter blues, before the bar cars went the way of Blockbuster and pay phones.

However, for no real discernible reason, Governor Dannel P. Malloy may be bringing back the beloved bar cars, as early as Friday.

This is an interesting choice as every seasoned rider of the Metro North knows how to paper bag their beer anyway (because no one can expect the population to commute out to Connecticut sober), every time.

And back in 2014, when the bar cars were still in commission, there were only a couple of them and wildly overrun by cliques of middle-aged men with their ties loosened and their shirts untucked.

According to The New York Times, the cars might be returning to alleviate overcrowding during peak hours.

“I’ve had nobody come to me in the last few years and say, ‘Gee, we don’t have bar cars anymore,’” Jim Cameron, the founder of the Commuter Action Group, shared. “But hardly a week goes by when someone doesn’t say, ‘Why am I paying $300 or $400 a month when I don’t get a seat on the train?’”

Of the 60 train cars ordered by the state, 10 of them are going to be "cafe cars" that will serve the drinks. 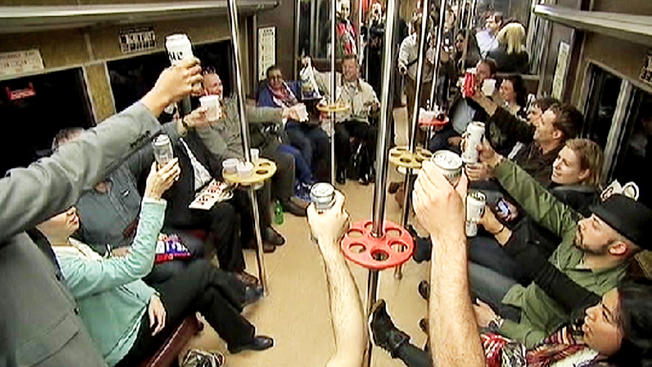 ... Okay, we can't simply just ignore this major semantic shift. "Bar car" to "cafe car." Rhyme or alliteration? How are we supposed to choose?

Either way, those of us on the Harlem and Hudson lines are jelly. We see you, New Haven.