Want the Best Wi-Fi in NYC Subways? This App Shows You Where the Best Reception Is

Have you noticed that lots of subway stations have wi-fi and cell phone service these days?

This enhanced access to connectivity took off last summer, and since then New Yorkers are much less plunged into the darkness of no-cell-phone-service on the train. In fact, in November the number of New York City subway stations with wi-fi jumped to more than half.

Still, there remain plenty of stations where the wi-fi is nonexistent, the cell phone service nowhere to be found, and the battery-sucking darkness is alive and well.

That's why, according to CityLab, Daniel Goddemeyer and Dominikus Baur have made an iPhone app and MTA-licensed posters illustrating the unequal geography of subway reception. It's called Subspotting.

"The Subspotting project captures, maps, and visualizes the available cell phone reception along all 21 lines, 469 stations, and 660 miles of track of the New York City Subway," Goddemeyer and Baur wrote.

"It is the first project of its kind to capture the cell phone reception in the entire subway system to provide New Yorkers ... with information on where to make the next call or send the next text while underground."

The project started when Goddemeyer realized he could finish his emails underground in little areas of connectivity. So he and his team started exploring the train system, and used a prototype data logger to detect levels of reception for Verizon, AT&T, T-Mobile, and Sprint.

The result? An app that shows the quality of reception at stations on your line as different-sized bars.

The app also shows which places along the subway system have wi-fi access, and marks track above-ground with blue.

If you download the app (or purchase its posters) you can plan where you'll be able to call or email or text, and roughly how much time you'll have with access before you're plunged back into internet darkness. 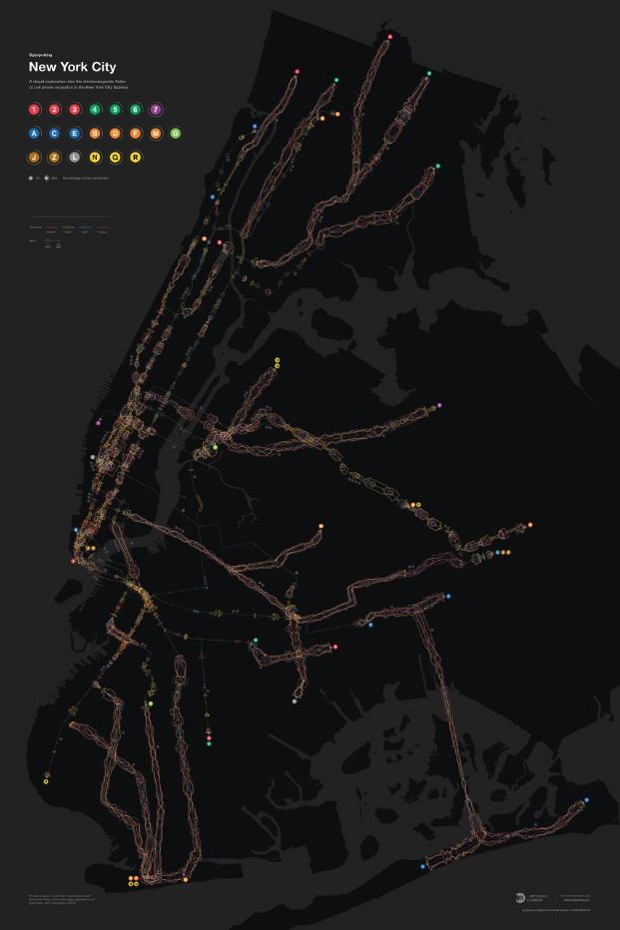 In Subspotting's research, which lines had the most coverage? The prize on that one went to the 7 and J lines, which had 79 and 75% coverage respectively.

The G, the most terrible line ever, had only 12% connection on its line.

They discovered that you'll find almost no service in Brooklyn on the R train, and that if riding the L train, you should make the most of service at 8th Avenue and 6th Avenue - you won't have service again until Wilson Avenue.

This is all very helpful, since we're all so desperately reliant on the ability to shoot off a quick message or check our Instagrams about every four minutes.

Check out the NYC Subway Explained in a Way Tourists and Transplants Can Actually Understand.