Not in My Brooklyn! Is This Anti-CitiBike Poster the Hipsteriest Hipster Thing Ever or Nah?

By now, we are sure you've seen blue bikes zipping by you and large amounts of them practically taking up a block.

These bikes have been around for a while, mostly in Manhattan, but we're not here to detail the storied history of NYC's beloved and decidedly obnoxious rental bikes. Let's talk about the future, and the future is pedaling towards more stops in Brooklyn.

But, not everyone is happy with them, and a couple of villains are twirling their oily pencil mustaches trying to figure out how to stop these blue beasts. Well, in the ever-waning Battle of Who Could Care Less About Something Stupid AF, someone has figured out the perfect way to bring them down.

A flyer taped found in Cobble Hill, Brooklyn by StreetsBlog is urging residents to say no to the prominent bike-sharing program.

The reason for the anger? Well, according to the person who crudely taped the flyer to a light-post, residents own their own bikes and have no need for Citi Bike.

Although Citi Bike is top billin', the flyer also expresses concerns over the F train going express, supermarkets closing, and high rises walling up the borough.

But, forgiving the hipster for something that really reads, "We were biking in Brooklyn before it was cool to bike in Brooklyn," maybe the anger is actually warranted.

No one is going to doubt Brooklyn is getting popular, so much so that it's home to the most gentrified neighborhoods in NYC.

Maybe the flyer is right when saying they are getting walled in. Have you see this building that might come to be? Grocery stores are dying as well. Look what happened to "New York's original grocer." 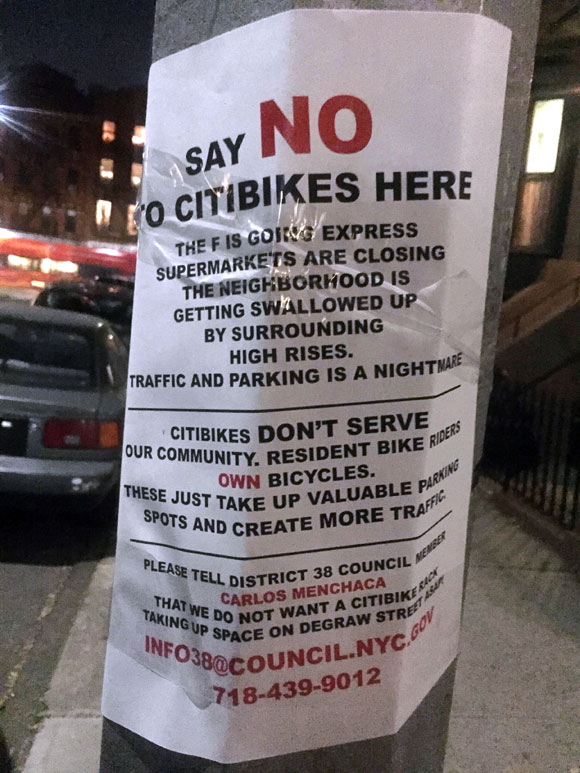 So, although it's easy to dismiss the flyer as nonsensical hipster garbage you can hear at any vegan coffee shop, it's tougher to dismiss the express train of gentrification coming to destroy everything.

Check out 7 Best Places to Have a Mental Breakdown in NYC.