Even though October is just getting started, this month is already shaping up to be the hottest and most exciting one within NYC's art scene of 2017!

In this list you will find exhibits that are interactive, feature immersive sci-fi inspired spaces, and that will challenge your senses as well as your intellect.

So make sure you check all or most of these art shows as they are conveniently located on the Chelsea, Soho, and Lower East Side gallery districts. 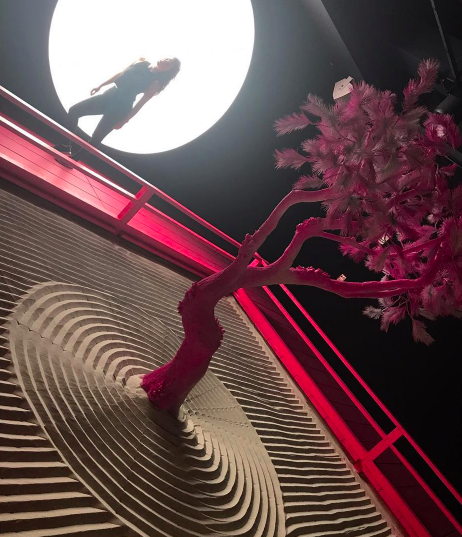 This exhibit marks Arsham’s departure from his past work, in which melancholic color palettes played with his light and sculpture installations, and pushes him into unknown territory where bright colors add a greater level of complexity to his body of work.

In “Lunar Garden” Arsham introduces a soft gradient of pink that injects vibrancy to this exhibit’s sound immersive and sculptural re-interpretation of a Japanese rock garden.

Even though a vibrant gradient of pink can be found painted along this garden’s fences and flowing around this space through lightwaves, the moderate use of this color stands out as an expression of Arsham’s sense of restraint. This is because even though the soft shade of pink stands out in high contrast with this artist’s quintessential dark color palette, it does not become the focal point of this show.

Arsham’s use of pink becomes the visual element that reminds us of the vibrancy of Japanese garden’s cherry blossoms. And therefore, provides its viewers with the unique opportunity to find themselves calmly gazing at the moon, yearning to experience the sweet smell of cherry blossoms that is distinctive of a Japanese summer night.

Daniel Canogar is showing his latest work at Bitforms Gallery. This show features six visually striking “sculptural screens with a membrane-like quality that can conform to multiple surfaces, objects, and architectures.”

The on-screen visuals and compositions in “Echo” are modeled in response to real time global data sets of environmental phenomenon such as seismic activity, rainfall, and temperature.

Canogar’s high tech sculptures almost seem as if they were a re-imagination of the extraterrestrial creatures featured in the Alien franchise. They will appear to be hazardous beings, which might detach from the walls that restrain them and absorb you into their luminous membranes at any second.

This month the Galerie Lelong went through a drastic transformation. It completely covered its floors with woven carpets in order to showcase the latest work of internationally renowned Chinese artist Lin Tianmiao.

Woven into these massive wool carpets you will find words and expressions that have historically been used to describe women, many of which are predictably derogatory.

This exhibit marks Lelong’s venture into interactive art. This is the reason why you are encouraged not only to enjoy the visuals created by this carpet’s vibrant colors, which stand in high contrast with this gallery’s white walls, but to touch and interact with “Lin’s intricate, labor-intensive work in textiles and thread.” 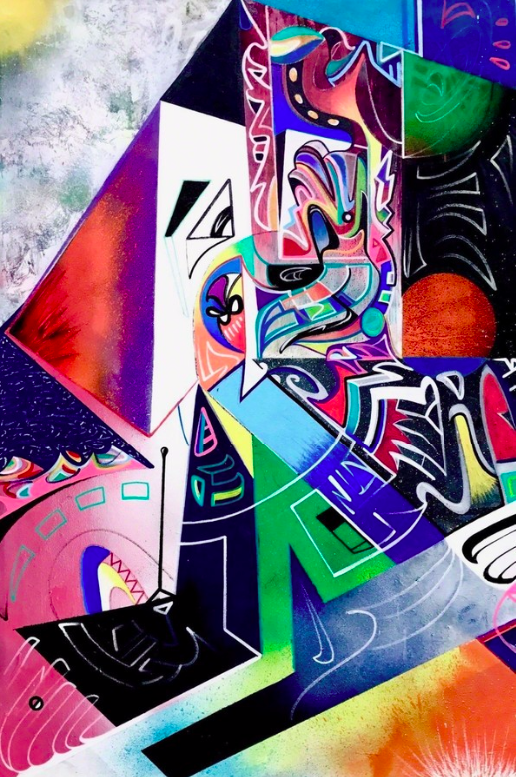 Photo by @artsy / Artwork by @zeehanwazed

ABXY, a new art space committed to support and foster the work of new artists, will be presenting its first show “Now We Here” this coming October 12th.

One of this show’s highlights has to be the work of Zeehan Wazed. The artist’s paintings will playfully challenge your sense of perception and space. They will capture your attention with their striking juxtaposition of vivid and dark colors and with their unique subjects, which stand out individually but also manage to blend in with their surroundings.

Wazed’s pieces will make you wonder what it would be like to be transported to this artist’s whimsical universe, one in which diverging realities and dimensions collide and the geometric laws that rule our universe are non-existent. 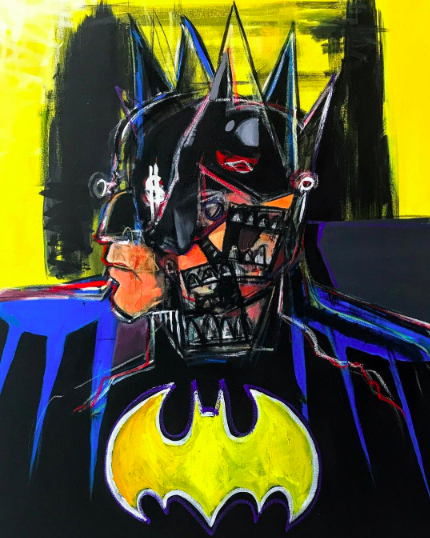 “Now We Here,” also features the work of Malik Roberts, a Brooklyn based artist known for “creating deconstructed portraits with controversial contemporary subjects” that explore the “relationship between visual culture and reality today.”

In his piece the Dark Knight, which portrays a deformed and almost demonic rendition of Batman, Roberts offers an incisive comment about the current political administration. This painting, conceived shortly after Trump took office, almost seems to have been a foreshadowing of the dystopian reality that was about to unfold, one from which not even the mightiest of superheroes can save us from. 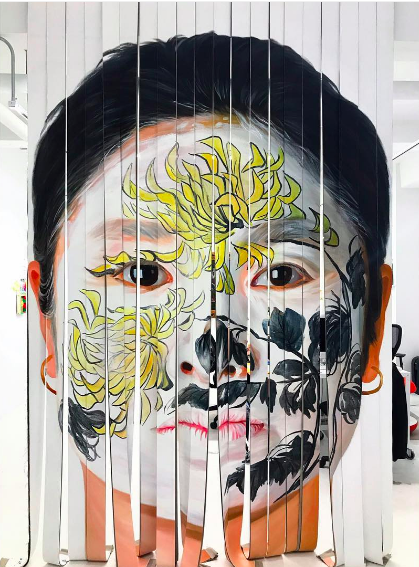 This exhibit showcases the current process of evolution that the world of modern painting is going through.

The intent of this exhibit is to showcase how artists across the world are challenging and therefore revitalizing the idea of painting: what it means, the techniques that it should involve, and the mediums it should utilize.

This show stands out not only because it contains artworks that capture your attention and delight your sight, but because it will change your definition of what painting is and what it should look like. This exhibit therefore provides visual proof that the worlds of photography, film, music, and sculpture can harmoniously collide. 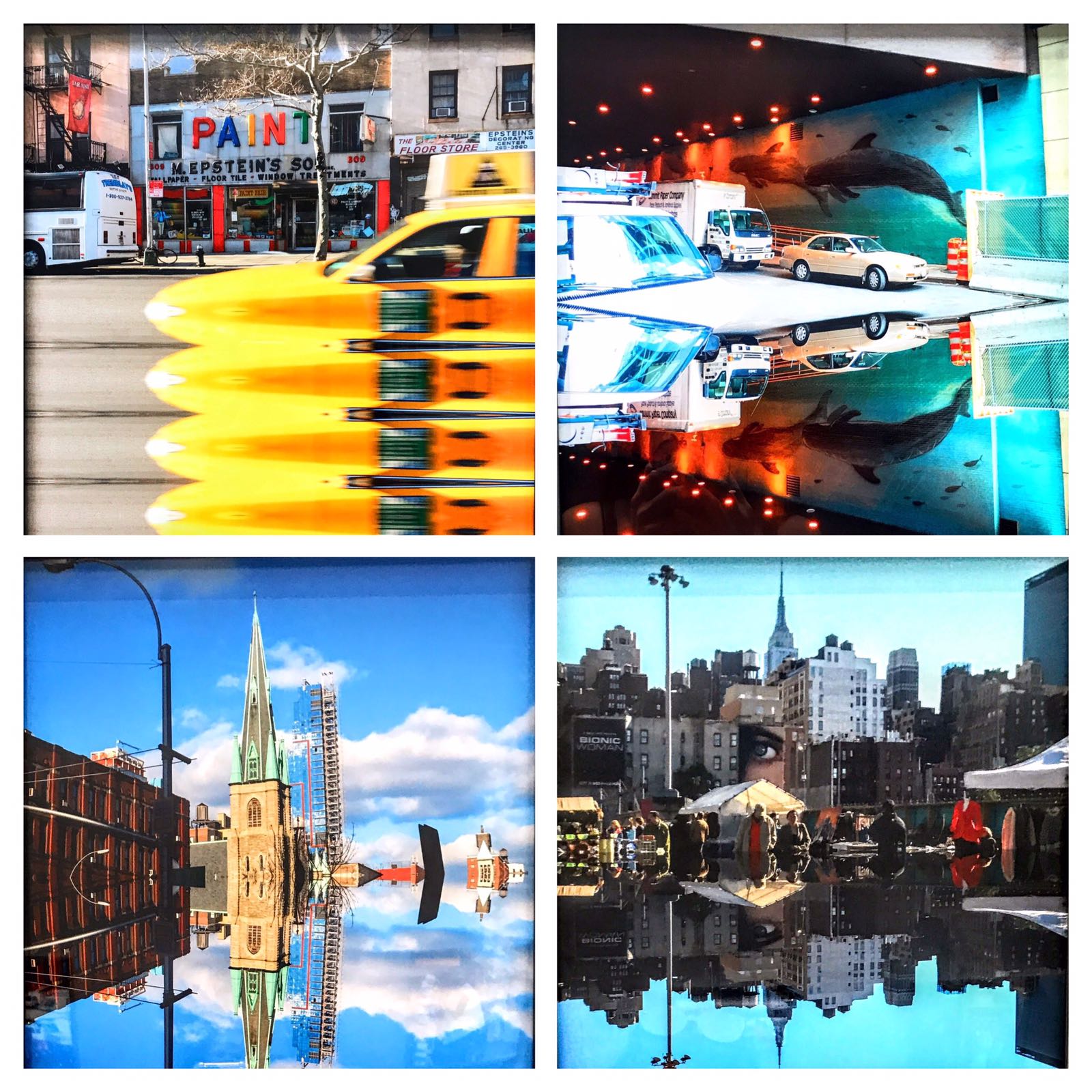 Lucas Samaras’ show has got to be the best photography show so far of 2017.

In this exhibit Samaras utilizes digital techniques such as doubling, mirroring, angle manipulations, and color saturations to present New York City as seen from his avant-garde perspective. The result are distorted images of everyday subjects that blur the lines between reality and an alternate psychedelic world.

His work is so innovative, so groundbreaking that it almost feels as if it was re-inventing the Surrealist movement through photography.

Samaras’ work stands out because even though his pictures seem like they were taken in an alternate reality, they are recognizably snapshots of New York City that exude this city’s chaotic essence.

This show is an absolute must see not only because it manages to capture the multi-sensorial experience that is walking around New York’s wild streets, but because it is challenging the medium of photography at its very core.

Samaras’ pictures showcase that the rules that govern the world of photography are just an illusion; that there’s still room to play with the representative nature of this field. This is why your sense of sight will be challenged and delighted by these pictures’ playful experimentation with colors, frames, depth, textures, shapes, and perspective.

Borinquen Gallo, Like a Jungle Orchid for a Lovestruck Bee, Burning in Water (until Nov 18th)

The overall effect achieved by this exhibit is one of full immersion into a world that harmoniously juxtaposes the concepts of chaos and order.

This becomes apparent when you look closely at her installations, which at first seem to be ruled by anarchy but upon closer look reveal themselves as an organized product of Gallos’ skillful manipulating, weaving, and sculpting of disposable materials.

The world that this artist created almost looks like a bizarre rainforest stemming from a sci-fi reality, which has had its structure, shape, and color palette completely turned upside down. 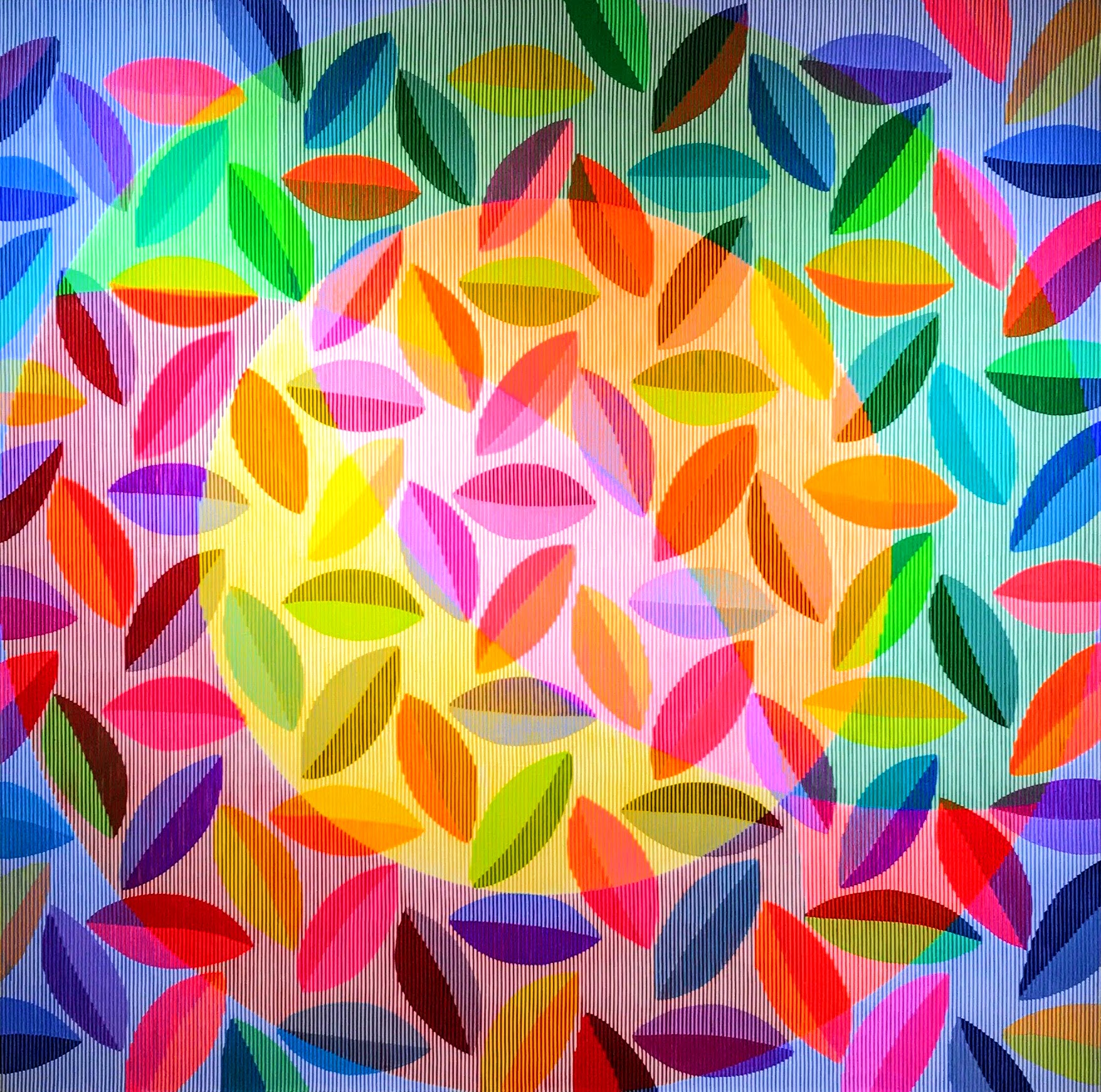 This exhibit is a kaleidoscopic experience. It encourages its viewers to walk alongside Antonio Marra’s work in order for the “dynamic energy of the artist’s optical illusion to manifest.”

Marra’s unique manipulation of color, shape, and form turns his paintings into provocative pieces of art.

This show’s intent is to be interactive. You will be delighted by the sight of the metamorphosis that Marra’s paintings geometric patterns, bright colors, and anarchic shapes go though as you move from one side of the painting to the other. 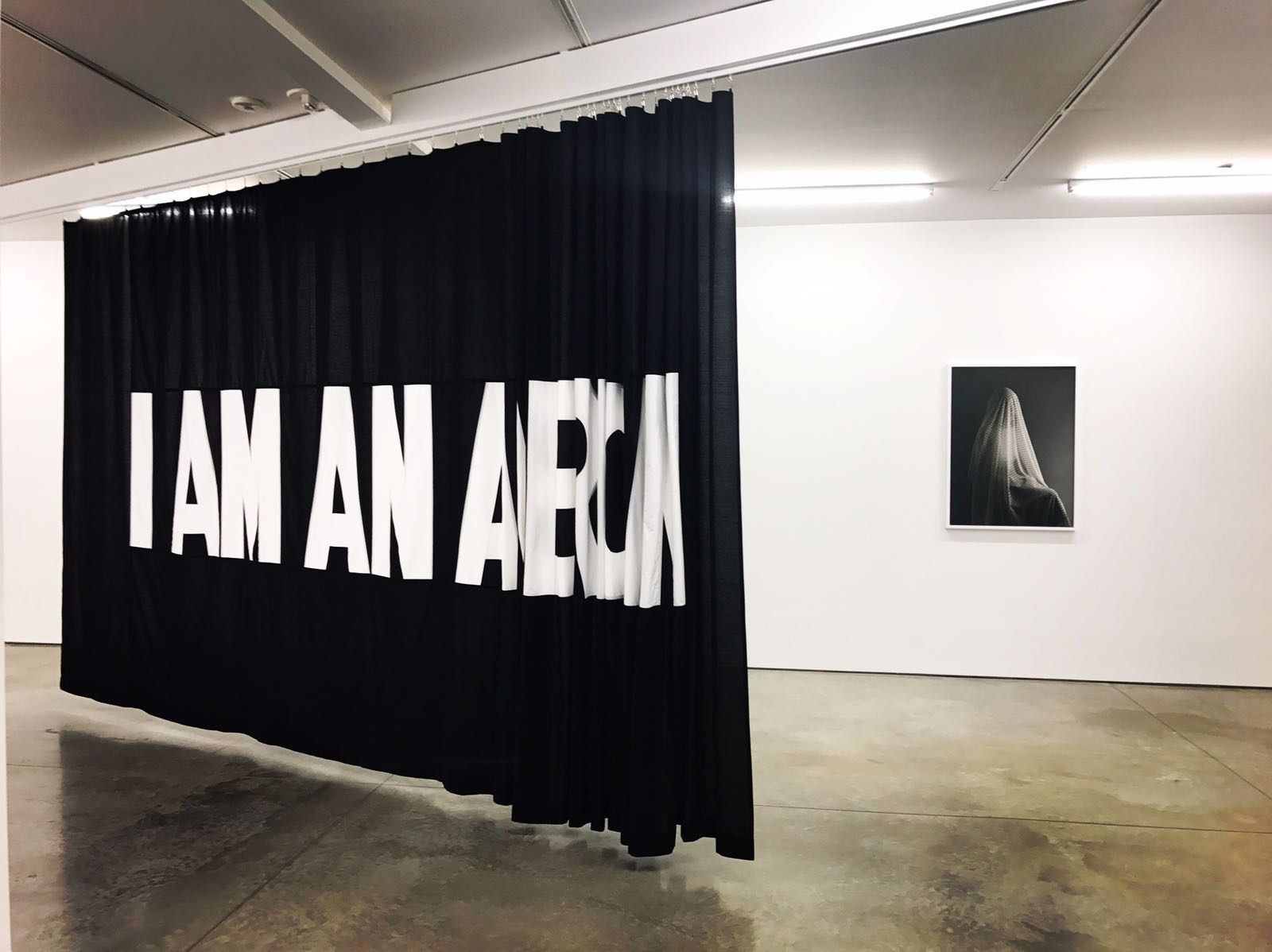 This exhibit features an installation of deconstructed fabric banners based on “iconic protest signs” and portraits of a socially disenfranchised youth, including minorities, women, and queer people.

Syjuco’s intent with this exhibit is to explore what it really means to be a citizen “in terms of national belonging, civic engagement, and radical responsibility” as well as to showcase the similarities that exist between the imagery found on past and present political demonstrations.

For instance, the banner that reads “I Am An American” (above) points to the similarities that exist between protests against the current political administration, which has effectively othered minorities, and “the sign posted by a Japanese American business owner following the bombing of Pearl Harbor,” which had the same text.

In this sense, this exhibit provides an incisive political comment about the fact that the issues that are at the core of modern society have not essentially changed and it points towards the need for people to continue to engage with political protest and activism.