Takin' the Temp: The 6 Train Can Now Help You Figure Out How Effing Hot It Is Outside in Celsius & Fahrenheit

If you're like us, you didn't really pay attention in middle school when learning about converting degrees Celsius to Fahrenheit and vice versa.

Thankfully, the 6 train feels for us, and has now given its riders the ability to easily convert from Celsius to Fahrenheit, according DNA Info.

The stops along the 6 train line roughly correspond with temperatures in Celsius rising in integrals of 5.

According to a graphic posted on Twitter, the 32nd Street stop is equivalent to 32 degrees Celsius, and 0 degrees Fahrenheit.

The 41st Street stop then corresponds to 41 degrees Celsius, and 5 degree Fahrenheit, and so on until the trains stop at 86th Street.

This phenomenon was picked up by Craig Nevill-Manning, who immigrated to the US from New Zealand, who often had to switch between using Celsius and Fahrenheit. 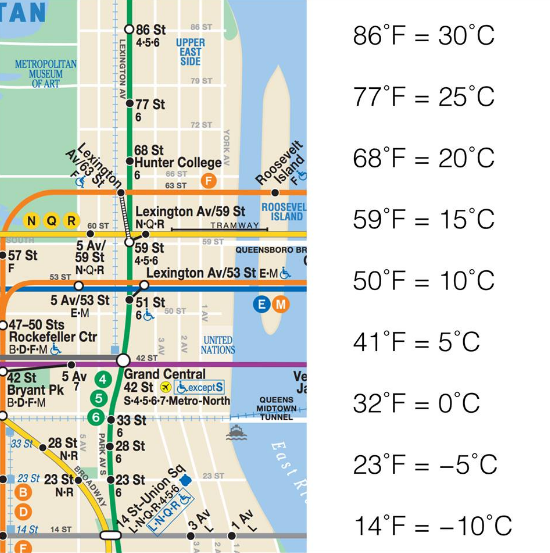 The numbers stood out as familiar to him, and he quickly picked up the reference and realized the correlation between the stops and the the Fahrenheit/Celsius conversion scale.

Now all you'll need to do to finally master Fahrenheit/Celsius conversion is memorize all of the stops on the 6 train, up until 86th Street, and you're good to go.