Sold! The First Unit at 432 Park Just Closed for More Than $18 Million

We hate to break it to you, but we have some terrible news. Those of you who've been counting up your pennies, just $10 away from that $18 million mark, you can stop. The first unit at 432 Park Avenue has been purchased.

Oh, what's that? Only a crazy person would spend that much buying an apartment?

Well, folks, in New York city that kind of craziness occurs daily, and if you're the person that bought the apartment and you're super offended, we think you should buy a $1 million apartment and spend the other $17 million on something else.

This breaking information has come at us from The Real Deal. The news we have is that the unit closed was #35B, and that it's a 4,003-square-foot apartment that includes four-and-a-half baths, a private elevator landing, and 10-foot by 10-foot windows.

Those are big windows. Okay, maybe it is worth $18 million. Or actually the $18.12 million it sold for, to be precise.

The name of the person who bought the apartment has yet to be announced. The name on the document is "LLC, 432 PARKVIEW," and we don't think that's really anyone's name. 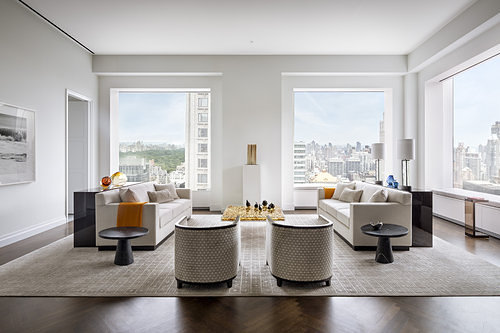 If you're the one who bought the apartment, tell us. If you bought if for us as a gift, thank you. If you didn't but you want to let us come check out your fabulous view sometime, we are totally down for that too.

Check out No Matter How Many Skyscrapers NYC Builds, We'll Never Replace Our Twin Towers.

[via The Real Deal]