The magnitude of the damage caused by Hurricane Harvey has yet to be fully concluded. However, the heavy winds, reaching around 130 mph, and catastrophic flooding, left cars buried in the streets, and homes nearly engulfed after being left behind in the midst of evacuation orders.

Or in the case of residents throughout Houston, which did not present an official order of evacuation unlike other Texas cities, where many were left trapped in attics or on the roofs of their flooded homes.

Nearly half a million people in Houston and surrounding areas will be in need of federal aid following the disastrous storm.

The storm hit the coast of Texas on Friday night, August 25th, and was declared the strongest hurricane to hit the U.S. in more than a decade. In the days since, the wind speed has slowed steadily, though the torrential rainfall has persisted, inflicting more and more damage.

Here are some of the ways that people around the country are offering their help, and how you can show your support as well.

The Houston Food Bank, Galveston County Food Bank, and Corpus Christi Food Bank are all in need and deeply appreciative of any help you can offer. They are currently accepting online donations.

Texas Diaper Bank and Portlight work to supportspecific groups of people who are especially vulnerable in times of need. Both organizations focus on helping and providing supply kits for people with disabilities, in particular children and senior citizens– people whose needs are often overlooked in the chaos of emergency situations such as Hurricane Harvey.

Currently, they are raising money, with an overall goal of $2 million, to provide supplies to Houston and surrounding areas.

As most of us are too far away from the wreckage to offer hands-on help, you can visit the Red Cross Website, as their may be locations nearby for you to give blood donations for injured hurricane survivors. 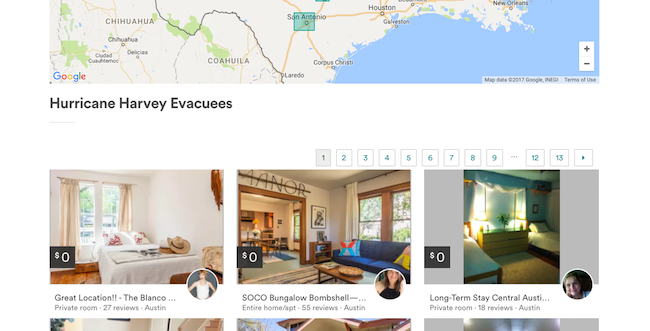 Airbnb has made an INCREDIBLE contribution, waving all service fees for those affected by Hurricane Harvey. The offer stands from August 23rd through September 1st. By visiting the Airbnb site, you will see a number of homes and apartments that have been offered as free shelter for storm refugees.

You will also see a link for you to provide shelter if you are in surrounding, nearby areas unaffected by the storm.