It's Gettin' Hot in Here: Did You Know 2015 Was the Hottest Year in History?

Is it hot in here? Nah, it's not just you. Kidding. You're not hot. You're probably freezing right about now thanks to good ol' Winter Storm Jonas.

But you'll remember that not too long ago, we were completely baffled by the lack of winter weather. Turns out, our concerns weren't totally misplaced.

2015 was the hottest year in history, shattering the record by a pretty significant margin.

Data from NASA and the National Oceanic and Atmospheric Administration was published on Wednesday indicating that 2015 set a record with average temperatures across land and ocean surfaces 1.62˚F higher than the 20th century average.

While 1.62˚F doesn't seem like a lot when you consider the temperature fluctuations of any given area over a period of 24 hours, consider the amount of heat required to warm the oceans and air by a single degree across the globe, the number becomes not only significant, but potentially cataclysmic.

For example, according to NASA, a one to two degree drop in global temperature was responsible for the Little Ice Age.

No, we're not currently suggesting that we're going to enter an apocalyptic sauna scenario, but the drastic rise is a bit troubling.

NASA and the NOAA's data indicates that this is the fourth time a record has been set in this century alone, with 2015 showing the greatest increase from the previous year.

"2015 was remarkable even in the context of the larger, long-term warming trend," stated the Director of NASA's Goddard Institute for Space Studies, Gavin Schmidt.

Both government agencies point to the excessive amounts of greenhouse gas emissions as the culprit assisted only slightly by El Niño.

El Niño is responsible for warming ocean surfaces, specifically in the Pacific, and happens naturally every 2-7 years. However, this significant increase in global temperatures cannot be blamed solely on El Niño, which is expected to continue until late spring. 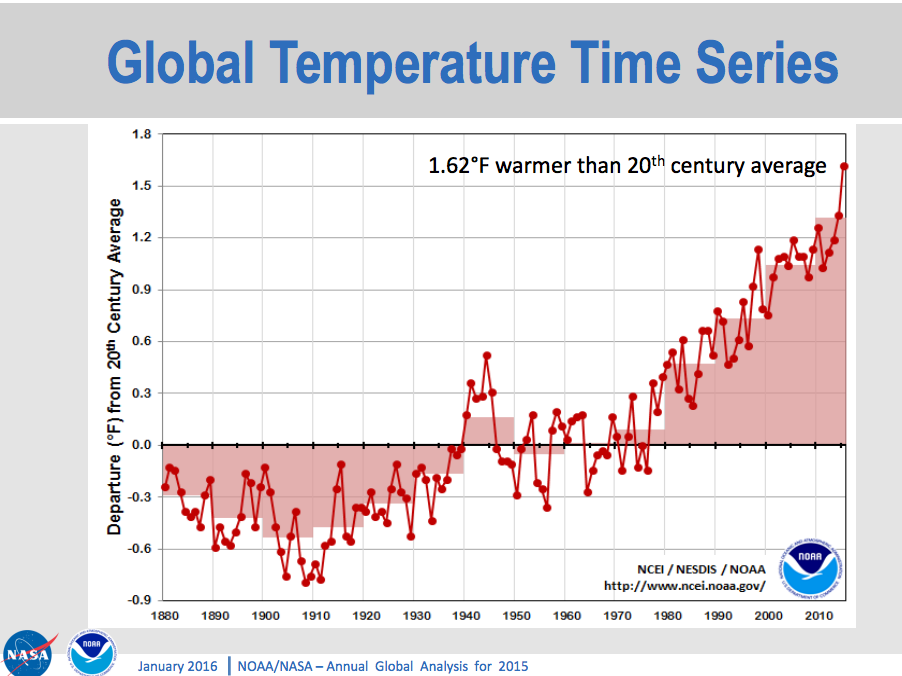 This new data further emphasizes the need to keep the global temperature from increasing to 2˚C above average, the target agreed upon by 195 countries, including the US, at climate talks in Paris in December.

As the first universal climate agreement, the Paris Agreement is a massive step forward in preventing future global temperature increases by reducing greenhouse gas emissions and aiding developing countries affected by the impacts of climate change.

Check out Can You Guess Which U.S. City Is the Most Expensive to Afford a House.