We know it's hard to believe right now as we all sludge to work through the mess Winter Storm Stella left behind, BUT SPRING IS JUST AROUND THE CORNER! 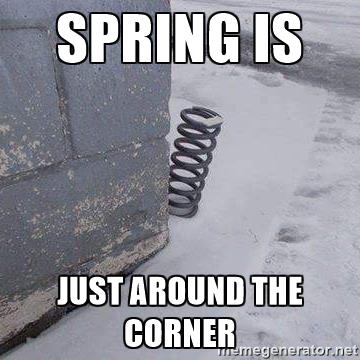 No, not that spring.

Real spring. The season. The beginning of warm weather (almost) every New Yorker lives for. And the start of flea market and street fair season!

Imagine your ideal Sunday: going to brunch, then wandering through one of our city's many awesome flea markets, sifting through vintage trinkets you totally don't but ABSOLUTELY DO need, then hitting up a food truck for brunch round 2.

Wow. We are ready for this snow to melt ASAP. Here's a list of our favorite 14 flea markets and street fairs in NYC and their opening dates and locations for the season.

(P.S. Don't worry, some flea markets are already open if your itching for some new vintage tchotchkes ASAP)

Brooklyn Flea is leaving behind it's flagship Fort Greene location after 9 years to join the food fair Smorgasburg in Williamsburg at the East River State Park this year.

If you miss the Brooklyn Flea on Saturdays in Williamsburg, don't fret! You can head to the DUMBO location on Sundays for some equally thrifty thrifting.

Did you also miss Smorgasburg on Saturday? Dang, how hungover were you? Well don't worry, you also get a second shot at love/delicious food with Smorgasburg in Prospect Park on Sundays.

Okay we're kind of jealous that Brooklyn has all of the good flea markets. I mean we get it—Brooklyn is hipster Disneyland. Bushwick Flea was originally supposed to open this weekend but postponed until next due to the crummy weather. #ThanksStella

Huzzah, we made it out of Brooklyn! LIC Flea & Food is Queens' largest outdoor flea and food market. Enjoy a stroll along the East River while taking in the epic view of Manhattan while you stuff your face with the best of the best of Queens' street food.

Finally! Manhattan! This popular LES street fair is more than just food and flea, it's also cultural and community gathering with different themes every week!

YQY! We love a good night market! This family-friendly, open-air festival features over 100 vendors selling foods and crafts from around the world, and there are frequent live cultural performances to enjoy.

This is a bi-annual event so DON'T MISS IT. Or you'll have to wait until September to catch this gathering of the best of the buzzworthiest bites in town.