Brooklyn is pretty widely considered to be one of the coolest neighborhoods around.

So it makes sense that Brooklyn is bursting with cool events going down in August.

But we didn't expect anything less, of course.

You can get your dance party fix, or unleash your inner 12 year old at a massive water gun/balloon fight in Brooklyn this month, and what could be better than that?

Take advantage of the fact that you can still maneuver around Brooklyn while the L train is still running.

Or maybe start prepping yourself for the hell to come by taking the bus or the J/Z train. It always pays to be prepared.

Mad Decent Block Party is back for two days at MCU Park. This year's lineup includes some of our favorites. Ke$ha (YAAAAAS!) and Diplo, just to name two big names that'll be making appearances.

Mad Decent has been traveling around the US for some time now, but this is your only chance to see them in your own backyard.

If you're a fan of all things Anderson, get pumped. Syndicated Bar in Bushwick is bringing you seven of Wes Anderson's classic films, including The Royal Tenenbaums and Moonrise Kingdom, one for each day of the week.

There are multiple showings of each film throughout it's respective day, so you won't have to play hooky from work to catch your favorite Wes Anderson flick. 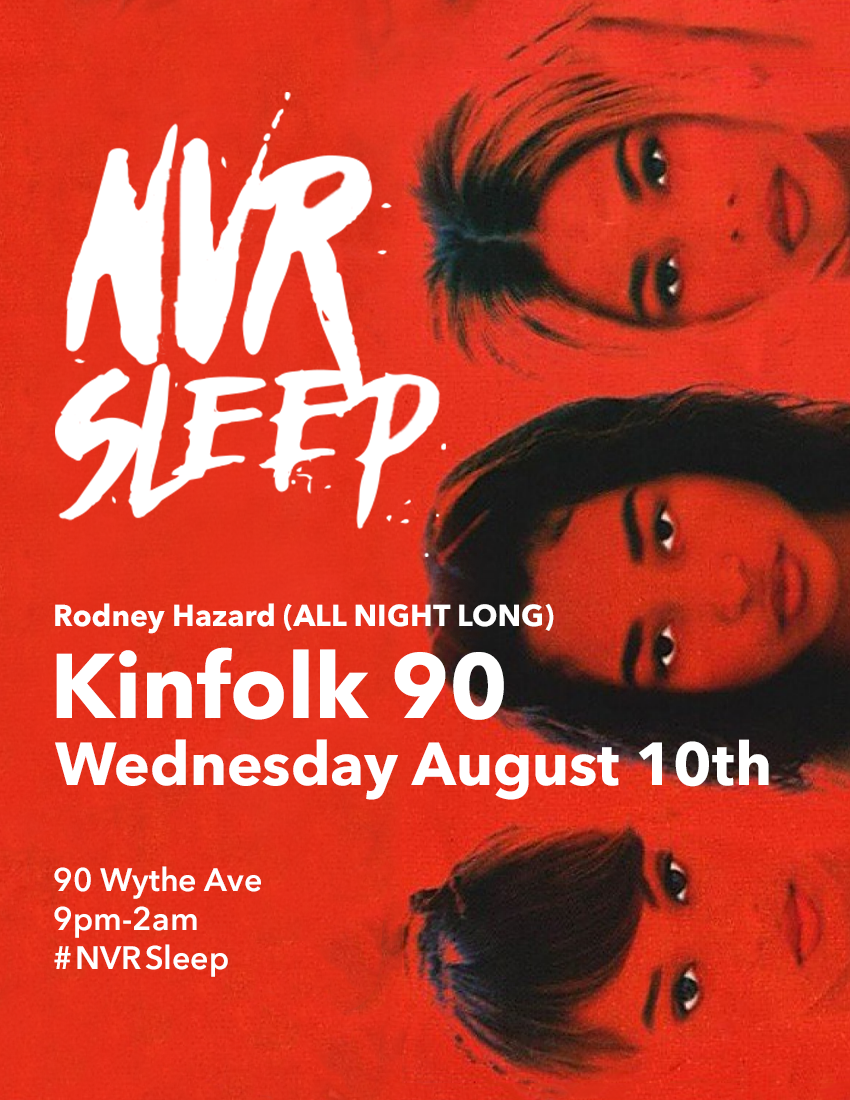 Hip-hop producer and spoiled Media Creative Director Rodney Hazard is bringing the fire to Kinfolk 90 in Williamsburg. NVR Sleep is always a good time, but this R&B party, going down August 10th, is going to turn up the heat .

So, if you’re wondering, “Can I kick it?” Yes. Yes, you can. Come kick it at Kinfolk 90. Rodney Hazard’s dropping fire. All. Night. Long.

Sip (or throw back) on some cocktails, grab some grub, and pat yourself on the back for finding this gem without having to dig deep for a cover charge. Yes, it’s free. Dance all night long, from 9 p.m. to 2 a.m. because, well, you can sleep when you’re dead. Nvr Sleep. Evr.

Now you can impress your date with your dance movies without having to break the bank. All you've gotta do to get on the list for this dope party is RSVP here.

This is the most lit dance party in New York City, no lie. The music starts at 7 p.m and doesn't stop until 10 p.m.

This is one serious dance party, so make sure you dress to sweat. Phones aren't allowed on the dance floor, which is probably for the best since things will be getting pretty intense down there. Buy your tickets now, if you think you can handle it.

Dust off your super soaker and blow up your water balloons, because the biggest water fight of the year is back. Make sure you store your phone in the safe dry zone, and don't forget to bring your own towel.

There'll be drinks of the alcoholic variety for all those who can't properly compete in a water challenge without a bit of a buzz.

Try out some flavorful new cuisines at the NYC African Food Festival. Famed African chefs will be bringing both the eats, and some tutorials on how you can keep the flavor coming by making these dishes in your own home.

Get your ticket and empty your belly.

This is the biggest battle of the brew around. $20 will let you sample all 25 of the finest home brews in this years competition, also competing to be crowned the best home brew in Brooklyn.

Plus, a pricier $40 ticket will get you all you can eat nachos and frito pie. No, we're not kidding.

There's nothing like living like it's 2009, right? Emo Night Brooklyn is bringing back the biggest hits (and their pop-punk bastard offspring) and looks from your emo phase.

Fall Out Boy, AFI, A Day To Remember, and Panic! at the Disco's greatest hits will be blasting, and you'll be able to head bang with your emo compatriots until 4 in the morning. Make sure you grab a ticket, and some eyeliner while you're at it.

This festival is offering you the best the boardwalk has to offer. There'll be a variety of circus acts, including juggling, acrobatics, and magic.

Some comedy acts will also be making appearances, and of course you'll be able to purchase your favorite boardwalk fare (if you haven't already, try the fried oreos, you won't regret it).

Throw some glitter and glow paint on your trusty bike and head out to Greenpoint for the Brooklyn Bike Rave.

You can check out the other colorful whips as you bike for 7 miles along the Brooklyn Waterfront Greenway, ending in DUMBO for drinks, food, and live music.

This is the King of all quiet clubbing events. Nine live DJ's will be spinning for three different channels for you to choose from.

Plus, there'll be some LED robots with air canons. And LED hula dancers. Half of this party is all that there'll be to see. Make sure you get your ticket before they're gone.